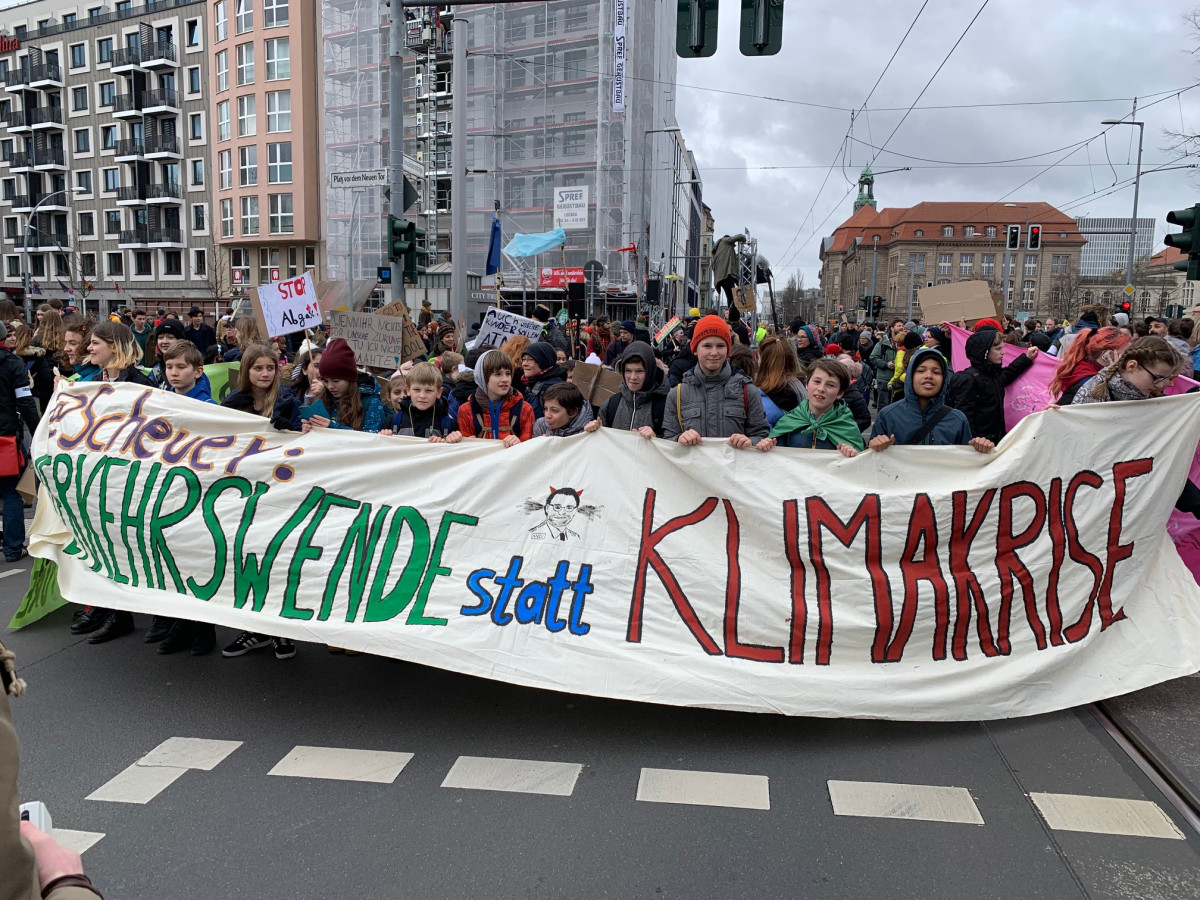 Students demonstrating in Berlin on 15 March against the climate crisis. Photo: Rachel Waldholz

Tens, possibly hundreds of thousands of students poured into the streets in cities across Germany to demand more action on climate change. It’s one of the biggest showings for the "Fridays for Future" movement, which has mounted school strikes every Friday for months to protest inaction from political leaders. The student protests, inspired by Swedish student Greta Thunberg, took place simultaneously in scores of countries around the world, from New Zealand to Uganda to the US. In Germany, the protests prompted a debate in the parliament, and drew both support and criticism from public figures across the political spectrum.

The organisers for the “Fridays for Future” protests estimated that 300,000 people in 230 cities had participated across Germany. In Berlin, the massive crowd of students gathered near Germany’s economy and energy ministry Friday morning, spilling into the surrounding streets and disrupting traffic, before marching to the Chancellery and back. Scientists and parents joined the protests in many places.

The police estimated that up to 20,000 people participated in Berlin alone, while organisers put the number at 25,000, Berlin daily Tagespiegel reported. Crowds were also large in other cities: in Munich, police figures put the protest at about 8,000; in Cologne, approximately 10,000, according to news agency dpa.

The protests come at a sensitive moment in Germany, as lawmakers are already wrestling with the issue of climate change. Chancellor Angela Merkel's governing coalition is supposed to introduce its signature Climate Action Law this spring, but is split over how to proceed. On Thursday, the governing coalition parties agreed to install a “climate cabinet” to coordinate emissions reduction efforts across various ministries. Meanwhile, lawmakers must also decide how to implement the recommendations of Germany's coal commission, which proposed ending the use of coal entirely by 2038.

The school strikes have provoked reactions across the political spectrum. Merkel herself said she “welcomes” the student protests, but some conservative lawmakers have been more critical, and the strikes have prompted a fierce debate over whether students should be allowed to skip school. 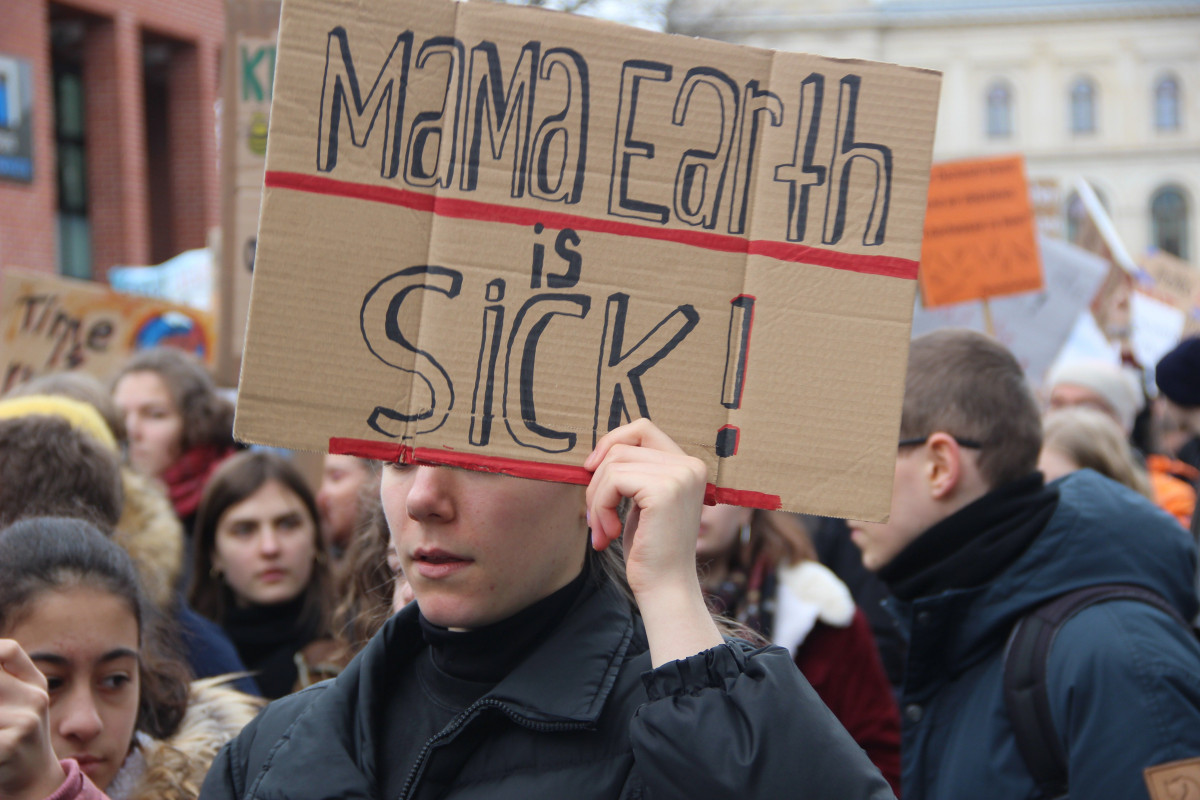 "Mama earth is sick." A student protester at the 15 March 2019 protest in Berlin. Photo: Phil Bednarczyk

The protests prompted a special session in parliament on Friday, where the co-head of the Green Party parliamentary group, Anton Hofreiter, argued for faster climate action. “The Federal government has been on strike for 14 years with regard to climate change,” Hofreiter said. “[Chancellor Angela] Merkel has described the strikes as a good initiative, but where is the German government's initiative?”

Education minister Anja Karliczek, a member of Merkel’s conservative CDU party, said that while student protesters’ commitment to climate action is laudable, school is still compulsory in Germany, and the basis for educating students about issues like climate change.

Karliczek said the government’s new climate cabinet shows the ruling coalition is “working flat out on climate protection and other solutions.”

While social media were full of reports from the protests across the country, some conservative politicians and commentators reiterated their rejection of the students’ approach, which has been part of the debate in Germany over the past several weeks. On Twitter, Michael Kuffer, a member of parliament in Merkel's conservative CDU/CSU alliance, was critical of the protests. “Dear students, who are protesting in front of the Chancellery - instead of being in school! I could give you prominent examples of how it ends when you have learned nothing right except to demonstrate,” Kuffer tweeted. 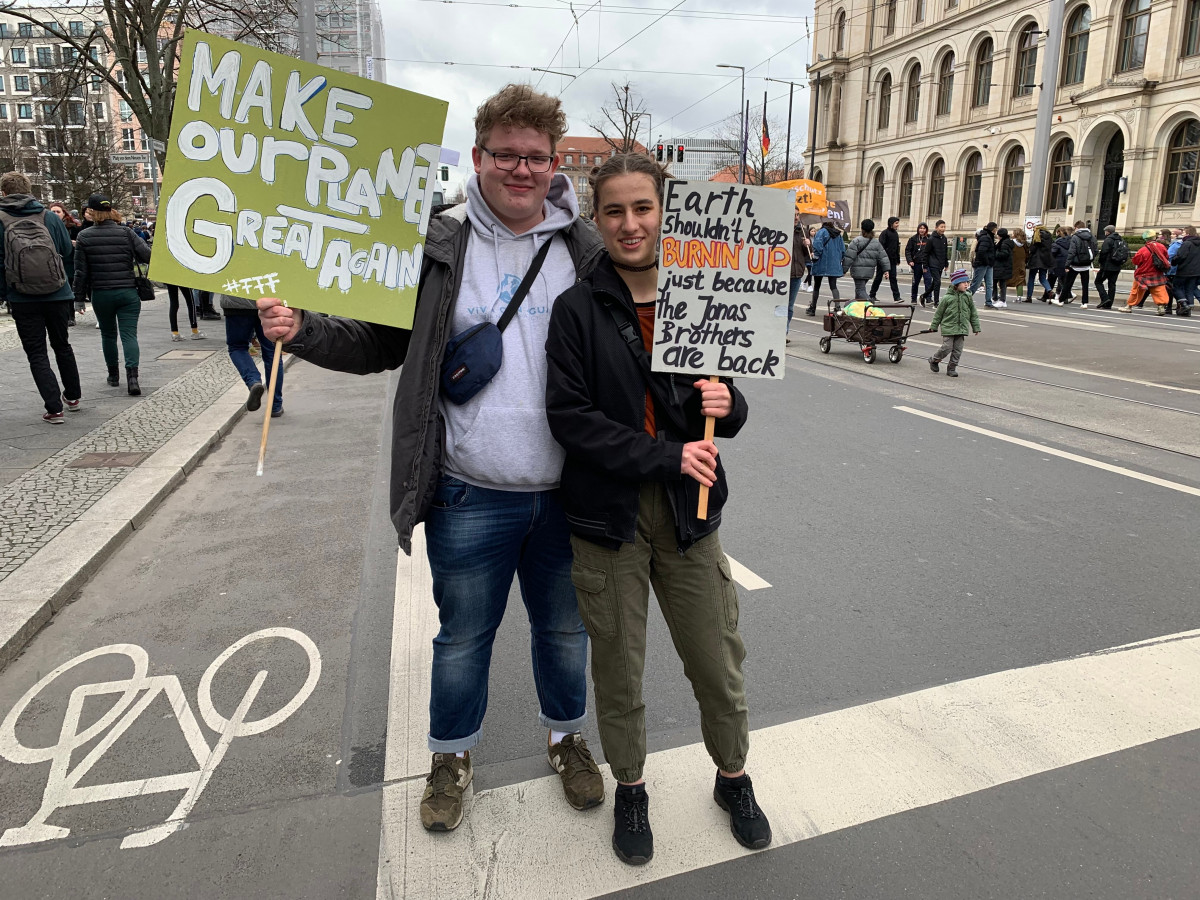 Protesters Helene Hager and Nick Bley near the German energy ministry during the 15 March 2019 protest in Berlin. Photo: Rachel Waldholz

The leader of the pro-business Free Democrats, Christian Lindner, meanwhile doubled down on his earlier criticism, saying students should not protest during school hours. He suggested to holding a "climate day " at schools every year, for students to look at all angles of the issue.

Many others have spoken out in support of the students, especially from the world of climate science and policy.

An online petition supporting the students from the group Scientists for Future has drawn signatures from thousands of researchers across the German-speaking world. Signatories include prominent German figures like Stefan Rahmstorf, the head of the Potsdam Institute for Climate Impact Research; energy economist Claudia Kemfert; the co-chair of Germany's coal commission Barbara Praetorius; and well-known TV personalities such as physician and TV comedian Eckart von Hirschhausen. Berlin’s Museum for Naturkunde offered free admission to students and parents for discussions on climate change.

Brigitte Knopf, of the Mercator Research Institute on Global Commons and Climate Change, a prominent voice on climate policy, joined student protesters in Potsdam, and called their engagement “inspiring.”

“It was a great mood,” Knopf told Clean Energy Wire. “Even the younger students are well informed on the basis of scientific facts and are fully aware of the Paris climate treaty. They're impatient, they want something to happen now to save their future.”

According to a survey commissioned by public broadcaster ZDF, more than two-thirds of people in Germany support the school students’ cause. Except for climate skeptics within the nationalist AfD party, a majority of voters of all political parties back the school strikes.

In Berlin, the massive turnout included elementary school students with their parents, high school students who attended with their schools' blessing, and college students who said they were awed by the activism of kids just a few years younger than themselves. Students held signs and chanted, "Wir sind hier, wir sind laut, weil ihr uns unsere Zukunft klaut!” (“We are here, we are loud, because you are stealing our future!”)

Helene Hager and Nick Bley, both 18, attended with about 60 students from their Berlin high school. They said their school supported students who wanted to attend the protest, excusing their absence.

"It's our future, and I think it's very important to fight for that," said Bley, who carried a "Make Our Planet Great Again" sign. "We are all young people, and in Germany they say, oh the young people are not interested in politics. [But] Fridays for Future brings so many young people to the streets...it's very nice to be here and see the unity."