The power price remained steady at the beginning of 2016 compared to a year ago, the German Association of Energy and Water Industries (BDEW) reports. For an average household using 3,500 kilowatt-hours of power per year, electricity costs are 83.67 euros per month. 54 percent (2015: 52%) of this goes to taxes and surcharges. 18.5 euros go on average to renewables. Grid fees have increased and make up 25 percent of the power price in 2016. Power prices on the wholesale market have decreased but the share of the household power price that can be influenced by the market price is down to 21 percent (24% in 2015), the BDEW says. 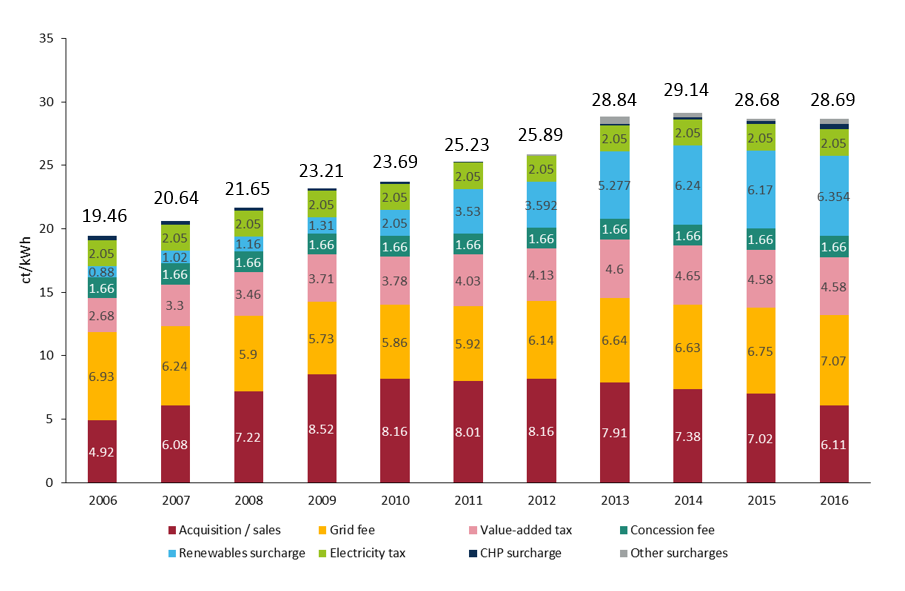 “Battery in the garage supplies house and car”

German car manufacturers want to enter the home battery market, writes Rebecca Eisert in the WirtschaftsWoche. BMW wants to create a new business around storage technology, for example by selling a battery that home owners can use in their garage to store renewable power which they feed back to their e-cars. Such intelligent storage concepts for households could help to boost the car makers’ e-vehicle business, says Eisert. To participate in the battery business, Daimler is cooperating with utility EnBW, while Audi and Porsche are planning their own fast-charging stations.

Energy politicians from the CDU (Christian Democratic Union) party believe a reform of the Renewable Energy Act (EEG) as proposed by Economy and Energy Minister Sigmar Gabriel (Social Democrats) will lead to a “cost explosion” for renewables support, Reuters reports. In a letter to chancellery minister Peter Altmaier, the group says Gabriel is planning a renewables share of 55 percent by 2025 while a target of 40-45 percent had been agreed on before. A higher share would increase costs, while the necessary north-south grid connection to transport green power would be finished in 2025 at the earliest, they say.

“Weaknesses in the system”

In the first two weeks of January, a lack of solar and wind power traditionally leads to high demand for coal and gas power, while demand is usually lower during the rest of the year, writes Franz Hubik in the Handelsblatt. When fossil power stations have to be turned off due to a high influx of renewables, the power customer has to pay for these so called re-dispatch costs, he writes. Energy Minister Sigmar Gabriel warned that such grid costs could be the new price driver of the energy transition, Hubik says. And grid operator TenneT warned that because the grid expansion wasn’t keeping up with renewables development, this issue would become worse in the future.

“Getting rid of auctions when they don’t achieve set targets”

In a comment on a leaked draft of the reformed Renewable Energy Act (EEG), green power provider Greenpeace Energy says that renewables tenders will make the energy transition less fair. Small actors and citizen cooperatives would be disadvantaged compared to large companies in the auction model proposed by the Ministry for Economic Affairs and Energy. Greenpeace Energy calls for a close evaluation of the first round of tenders and the option to reverse the reform if small, citizen-owned projects were pushed out of the market.
Energy expert Tobias Austrup of Greenpeace Germany warned that the “complete overhaul” of the successful EEG was endangering climate targets. Curbing future renewables development would not reduce the costs of the energy transition associated with installations built with feed-in tariffs in the first 15 years of the EEG, he said according to a press release.

Read the press release in German here and an overview of the EEG reform proposal in English here.

See a CLEW article on the debate about feed-in tariffs and auctions here.

The rapid drop in oil prices is slowing down the energy transition in the heating sector, writes Angelika Hillmer in the Hamburger Abendblatt. In many households old heating systems are below current climate standards. But changing an old oil-fired boiler for ecologically sensible gas, wood pellets or solar thermal technology does not make economic sense while oil is very cheap, she writes. Despite the energy ministry’s heating efficiency programme, plumbers in Hamburg are noticing a significant drop in demand for new heating systems, Hillmer writes.

The members of the parliamentary commission on storing high-level radioactive waste have agreed on a definition of a “location with highest possible security” for the radioactive remains of Germany’s nuclear reactors. The site with the highest possible security will have to offer the "best possible and lasting protection from ionising radiation and other harmful effects of the waste for humans and the environment for a million years", part of the definition reads.

European competition policies may have led to increased competition and better market results in the European gas and power markets in the past two decades, a study by the German Institute for Economic Research (DIW) for the European Commission shows.