Factsheet
The forests and fields that give Thuringia its reputation as "the green heart of Germany" are not just useful for agriculture and tourism – biomass also holds a higher share of the state's gross power production (20 %) than in any other German state. This is only topped by wind energy, which supplies 22.4 percent of the state's gross power production. In total, renewables account for almost 57 percent, making Thuringia the federal state with the second highest share of renewables in gross power production. This figure is set to rise as Thuringia aims to cover its entire net energy demand from renewable sources by 2040. In late 2018, Thuringia's state government adopted a climate action law setting the target of reducing the state's greenhouse gas emissions by 80-95 percent by 2050 compared to 1990 levels. Germany's only Left Party-led state administration wishes to lead by example and become climate neutral by 2030. Not all Thuringians are, however, thrilled about the state's official climate targets – resistance against new wind farms was a subject of controversy in the state election campaign 2019. [UPDATE adds preliminary final results of 2019 election.] 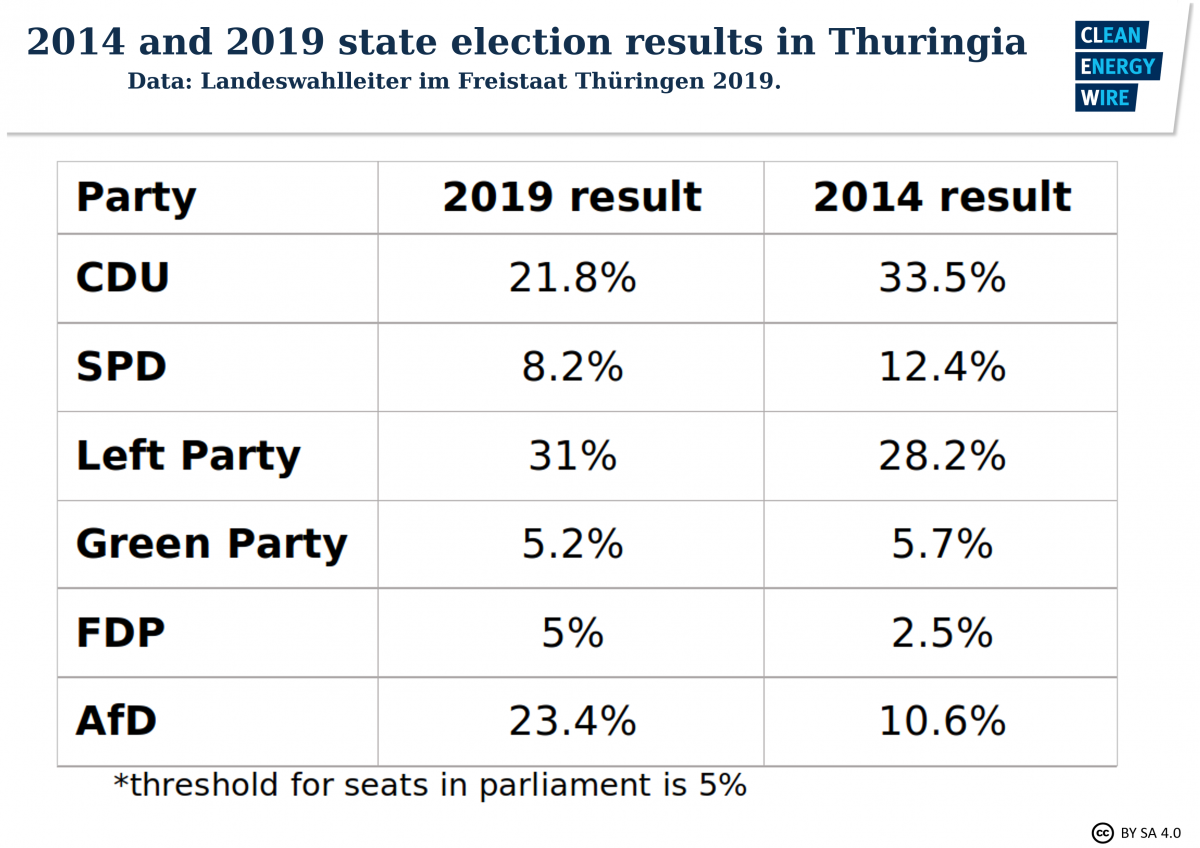 Renewables make up more than 24 percent of Thuringia's primary energy consumption, the second highest share among all of Germany's federal states. Gas and mineral oil together, however, account for the bulk of Thuringia's primary energy use – about 20 percent each. The state's reduction rate of energy-related greenhouse gas emissions – at almost two-thirds since 1990 – is by far the highest of all federal states in the country. Thuringia accounts for 1.4 percent of Germany's total power production and 2.6 percent of the country's power consumption.

Thuringia's current government coalition is headed by Germany's first ever state prime minister from the Left Party, Bodo Ramelow, in a coalition with the Social Democratic Party (SPD) and the Green Party. In 2018, this coalition adopted a climate action law as the first eastern German state, which aims to lower greenhouse gas emissions by 60-70 percent by 2030, 70-80 percent by 2040 and 80-95 percent by 2050, compared to 1990 levels. Besides raising the share of renewables in its energy consumption to 100 percent by 2040, the state is betting on turning its building stock close to climate neutral by 2050. To this end, the share of renewable sources to cover energy demand in renovated buildings should reach at least 25 percent by 2030. Thuringia's climate action law also focuses on actively involving districts, municipalities and cities in the energy transition. Relative to its population, the state already boasts the second largest number of energy cooperatives in Germany. 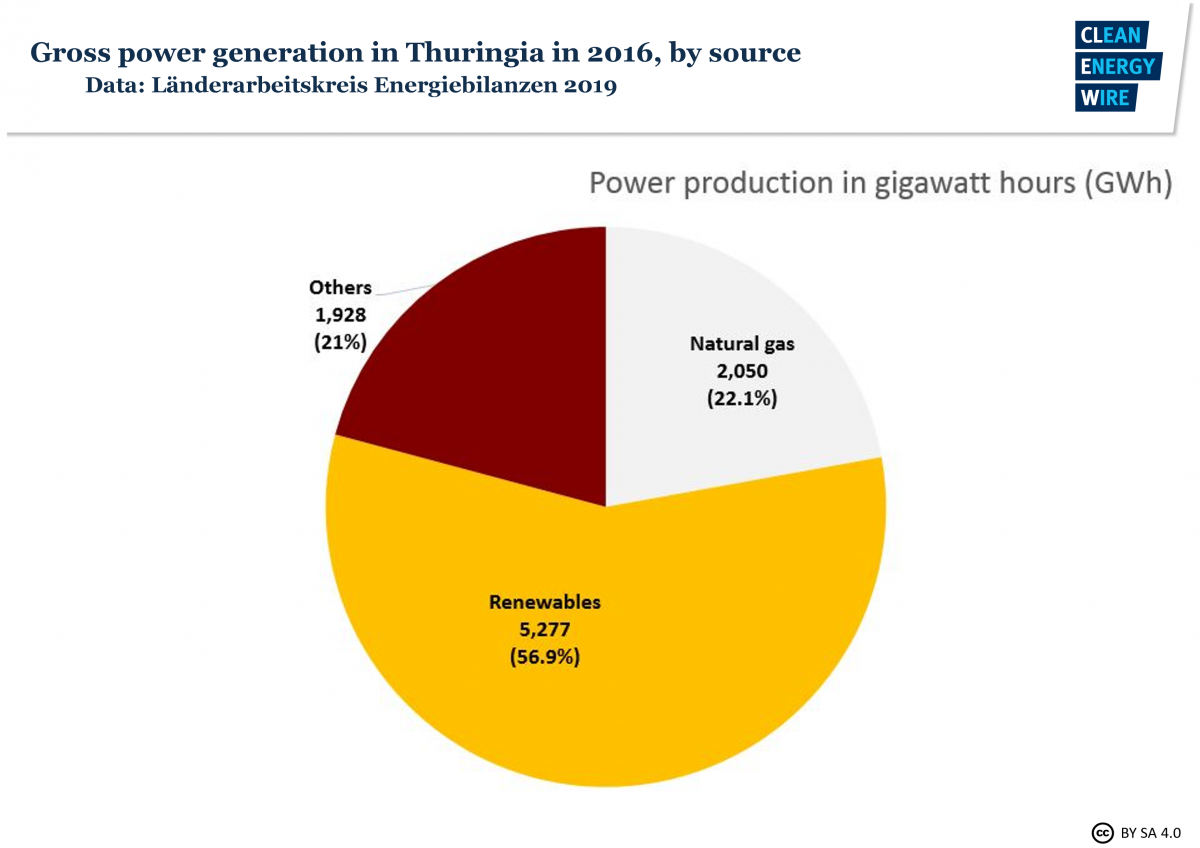 Although Thuringia has set itself ambitious goals for renewable energy, the state government has also opposed the construction of major high-voltage transmission lines meant to bring wind power from the north to Germany's industrial south, arguing that these would cut through a rich cultural and natural landscape. Also, citizens in Thuringia and neighbouring federal states have protested against the construction of the so-called SuedLink power line. In June, Thuringia, Bavaria and Hesse, however, reached an agreement on key aspects of the transmission grid expansion with the federal government. Among other things, they decided to lay long stretches of transmission lines underground.

The construction of wind turbines has also become a controversial issue in Thuringia, meeting opposition from several citizen initiatives. Most recently, several groups turned up to protest against new onshore wind projects as coalition member the Green Party kicked off their election campaign in the state. Resistance against new wind farms is fuelled by anti-energy transition rhetoric from the climate change denier far-right AfD party, which has found an easily exploitable issue in wind power, say some commentators. The AfD is predicted to win 20 percent of the vote in Thuringia's upcoming state election, up from 10.6 percent in 2014. The party rejects the "so-called energy transition," arguing that it endangers electricity supply and pushes up the price of electricity. It also demands that the minimum distance between residential premises and wind turbines should be 10 times the height of a wind turbine. However, all other parties in the state have rejected entering a coalition with the AfD. 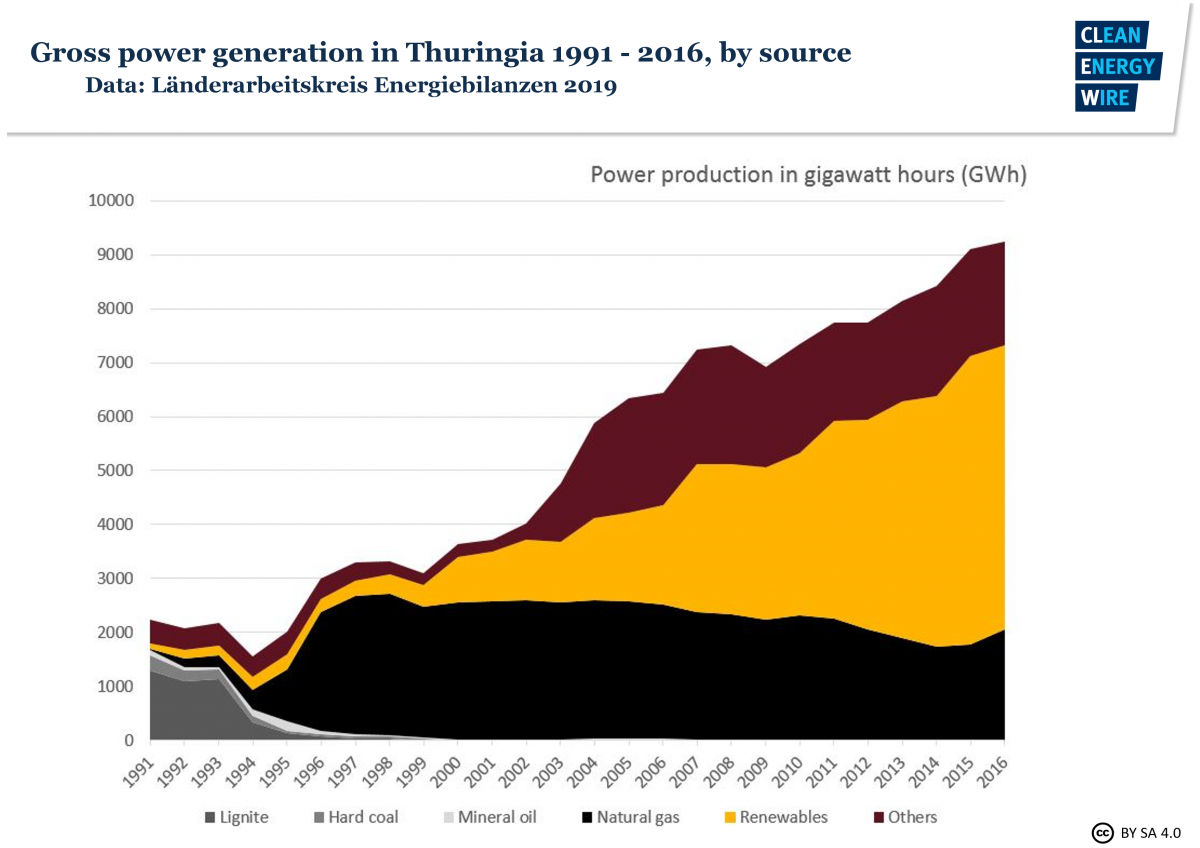 Jobs in energy and environment

In response to protests against new wind farms, state environment and energy minister Anja Siegesmund from the Green Party said that the environmental sector had created "60,000 new jobs" in Thuringia. In all, the state houses 366 companies active in the energy and environment sectors – 26 percent of these working in energy efficiency, 12 percent in solar energy and 6 percent in bioenergy. Other major industrial sectors in the state include automotive and food industry, mechanical engineering and high-tech enterprises working in biotechnology and optoelectronics. Chinese battery maker CATL has recently announced that it would invest more than 1.8 billion euros and create 2,000 jobs in Thuringia in response to the increasing demand for battery cells for electric vehicles made in Europe.