Factsheet
The near-term impact of the Energiewende on Germany’s economy remains hotly debated. There is no systematic monitoring of business and job creation -- or losses -- as a result of the country’s transition to a low-carbon economy. This factsheet provides an overview of data that are available on these issues.

Proponents argue that the Energiewende economy covers many sectors over and above the production of renewable energy hardware (solar modules, wind turbines, biogas plants, etc.) and renewable power generation itself – including, for example: energy efficiency, alternative mobility, educational and training programmes, research and development, the decommissioning of nuclear reactors, climate protection technology, smart grids and storage systems, and expansion of the power grid.

Usually, the impact of the Energiewende on the German economy is discussed in terms of the number of jobs created and also, though less often, in terms of revenue. In addition, the renewable energy and climate-related industries factor into Germany’s GDP and exports, keep added value in communities, drive innovation, push down wholesale power prices, increase energy security, and generate tax revenue. Still, the conventional power sector and heavy industry warn that the transition is harming Germany’s competitiveness.

One of the most widely cited sources on the economic impact of the Energiewende is a study by the Institute of Economic Structures Research (GWS) for the Federal Ministry for Economic Affairs and Energy, titled “Gross Employment for Renewable Energy in Germany in 2013,” which shows that in 2013 the renewables industry accounted for around 371,400 jobs (gross) in energy production and supply, the manufacturing of hardware, publically funded research and administration, and the service and maintenance of renewable energy facilities (see Figure 1). This figure is up from 160,500 in 2004. Because there is relatively little manpower involved in renewable power generation, most of these jobs are related to investments and not, for the most part, to energy production itself (See Table 1).

The biggest employer was the wind energy sector, followed by biomass (including many small-scale biomass systems. 44,300 jobs were lost between 2012 and 2013 due to the collapse of German photovoltaic manufacturing (GWS, p.7). In a presentation the author’s of the GWS report estimate the number of jobs in the renewable energy sector to rise to 500,000 - 600,000 by 2020 (p. 17). 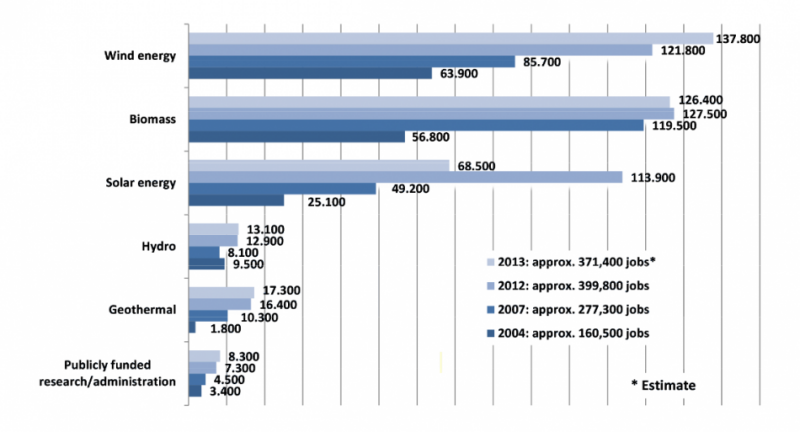 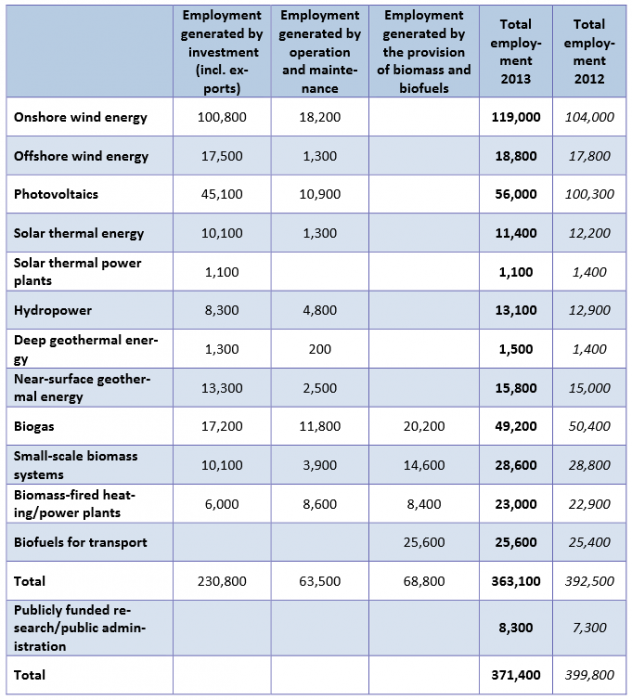 A 2014 study by Germany’s Federal Environment Agency (UBA) estimates that in 2010 almost two million jobs in Germany could be attributed to the environment protection sector (including waste removal, water protection, air pollution control, environmental services etc.). People working in the sector made up 4.8 percent of all people in paid work in 2010, according to a conservative estimate of the UBA; of these, around half are related to the transition to a low-carbon economy (Energiewende), the study’s author told the Clean Energy Wire.

The Renewable Energies Agency (AEE) estimates that 100,000 jobs (44%) in the renewable facilities manufacturing sector can be attributed to the export of renewable energy technology.

The energy sector and energy-intensive industry

But while hundreds of thousands of Germans have found employment in the renewable sector, critics say the Energiewende has hurt other sectors and cost jobs. 34 percent of the German companies interviewed for a survey published by the Chambers of Commerce and Industry (DIHK) said the Energiewende had an adverse impact on their firms, including on competitiveness in foreign markets. The poll says that 79 percent (p. 33) of German businesses have invested into energy efficiency measures. Of the 2,193 businesses polled for the DIHK study, four percent of industrial businesses have moved some production abroad, 8 percent said they are in the process of doing so and 12 percent are planning to do so because of “changes in the energy economy and energy policy in Germany” (p. 20). 76 percent said they do not consider moving any production capacities.

Large energy-insentive industrial businesses are exempt from paying the renewable energy surcharge and other taxes and fees, effectively benefitting from one of the lowest power prices in Europe on the wholesale market. Sectors that are energy-intensive but do not usually qualify for exemption from the renewable energy surcharge – such as some smaller chemical and metal processing companies – say they are suffering too. The German industry is highly competitive in export markets but say the high cost of power has made it more difficult for German industry to compete abroad. Germany is the world’s leading chemicals exporter.

Thousands of entrepreneurs have seen business opportunities in German’s energy transition, fuelling the growth of green start-ups. A report by the Borderstep Institute in cooperation with the University of Oldenburg found that 170,000 start-ups in the “green economy” were founded between 2006 and 2013, with young green businesses providing 1.1 million jobs. Businesses contributing to a lower-carbon economy accounted for 11 percent of all start-ups in Germany over the same period. Most new businesses were set up in the renewable energy sector (85,000), followed by the energy efficiency sector (73,000). A total of 135,000 young businesses are contributing with their produce or services to the target of a low-carbon economy, the authors say (See Figure 3). 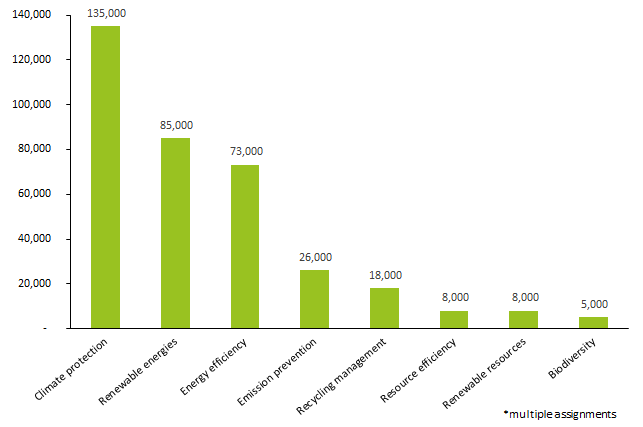 Across Germany, the highest total numbers of green start-ups were in the southern and western federal states (Länder) of Bavaria, North Rhine-Westphalia and Baden-Württemberg, while the states where the highest proportion of start-ups were in the green economy were Mecklenburg-Western Pomerania and Brandenburg in east Germany, as well as Rhineland-Palatinate in the west. 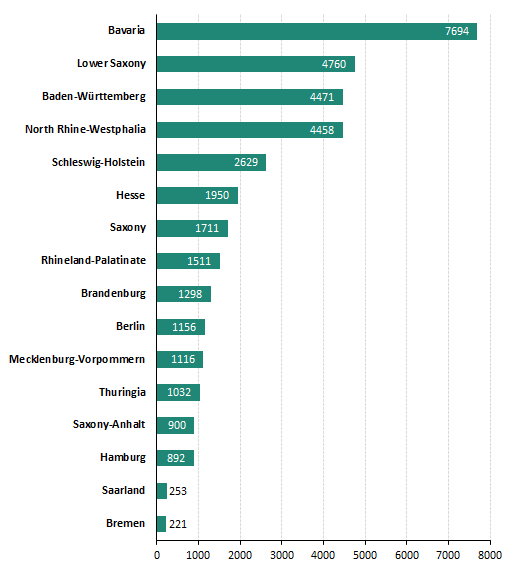 In 2013, Bavaria also had the highest number of people employed in the renewable energy sector at 60,540 (See Table 2). 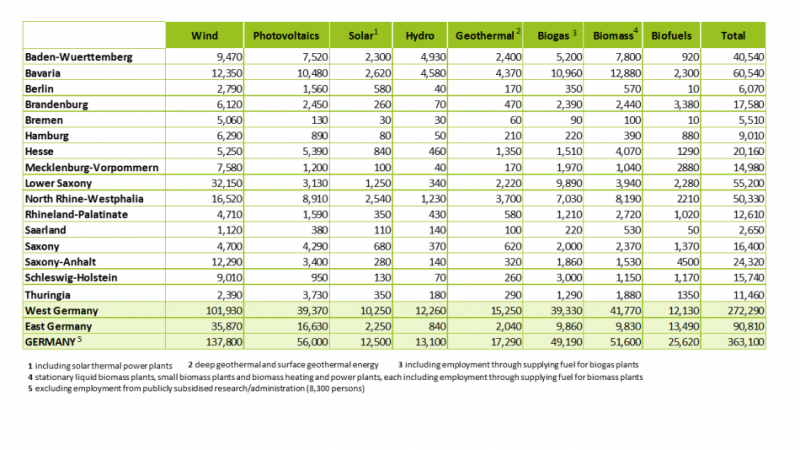