The climate advantage of natural gas can contribute to immediate CO₂ reduction by replacing coal and oil in the power sector and in heating, says Jürgen Fuhlrott, Head of Business Development at Germany’s biggest gas transmission grid operator OGE in an interview with the Clean Energy Wire. More and more biogas and synthetic gases must be added to the mix in the German infrastructure over the coming decades, until Germany enters a world in which it only transports “green gases”. According to Fuhlrott, this will mainly be hydrogen after mid-century.

Jürgen Fuhlrott: We have to look at the situation both in the long term – 2050 – but also beforehand. In the coming years, fossil natural gas can contribute to immediate CO₂ reduction by replacing coal and oil in the power sector and in heating, but also in transport, where gas does not yet play a big role. In the end, it would be of little use to reach our targets in 2050 if – in sum – we’d emit more than allowed in the meantime. 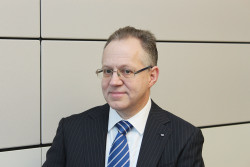 In the medium term, gas must become more and more renewable, for example by adding more biogas or synthetic gases to the existing mix. In the long term, we will enter a world in which we will only transport green gases. It makes sense to continue using the existing gas pipelines to transport converted electricity, instead of expanding the power system beyond what’s already planned.

You highlight the climate advantage of gas over oil and coal. Are there other reasons to continue using gas?

In a German renewable system based mostly on wind and solar power, generation is very volatile. If in addition to that we electrify the heating sector, we also drag the seasonal fluctuation in consumption into the electricity market. This means there will be an enormous need for electric energy storage. The necessary mega-batteries will not be available. Without converting renewable power into hydrogen or methane, we cannot store the enormous amounts of energy needed. It is necessary to continue to use gas and its infrastructure, also because – from an efficiency standpoint – re-converting the synthetic gas to electricity should be avoided as much as possible. That also means we have to ensure that gas applications continue to exist, or new ones are created.

How do you see gas demand developing in the future?

Gas consumption is unlikely to rise in the future, as we will see efficiency gains, especially in the heating market. At the same time, gas will still be used, perhaps in different forms and applications, and I see the gas market sustained at a level comparable to today’s.

How will the energy transition influence developments in the gas infrastructure?

If we assume that gas consumption in Germany does not increase, we will surely not see any purely sales-driven gas grid development in the future. However, two developments will make relatively large infrastructure investments necessary, although these are small compared to power grid expansion needs.

The volume of L-Gas will decrease in the Netherlands and Germany, which means that we have to switch to H-Gas in affected regions. We need to construct new pipelines to transport the H-Gas to these regions.

There will also be changes in the supply routes and sources. Because of its central geographical location in Europe, the German gas infrastructure was of course built to supply the country itself, but also for strong transit functions. Dutch gas was transported to Switzerland and Italy, Russian gas is transmitted to western European countries. Germany will increasingly be a transit country for LNG that arrives in Belgium or the Netherlands. The more the gas market becomes a European one, the more volatile the gas flows will become.

What role will hydrogen play in Germany’s future energy system?

Hydrogen will be of increasing importance. We believe that hydrogen can make a major contribution to Germany's energy supply and to achieving national climate protection targets.

Today, we can add pure hydrogen to the existing gas infrastructure to a certain extent. We have a variety of restricting factors and it’s impossible to give a final percentage, but we are likely talking about a maximum of 10 percent in the medium term. At the moment, this is lower, for example due to restrictions in the automotive industry, which are around two percent.

In the long-term, when we only transport green gases this will mainly be hydrogen in our view, because it’s the first step in the power-to-gas process. We will probably need the second step of methanation for a transition period, but this will likely be discontinued in the long term. Here, we are talking about the year 2050 and later.

What steps does the German government need to take in the future?

The government has to succeed in providing fundamental answers to energy transition challenges in this legislative period. That involves more than establishing a coal exit commission and leaving the choice of technologies to the market. No preferential treatment for any one technology regarding applications is the correct approach. However, if we talk about a more fundamental concept, it’s important to realise that the sensible integration of the existing electricity and gas infrastructures is absolutely necessary to make the energy transition a success. For this, it’s indispensable to adapt the regulatory framework accordingly. This has to succeed in this legislative period.

From the so-called coal exit commission, we expect a planned, socially just coal exit path, including an end date. This is of course also very important for us as the gas industry.

One topic that has long been discussed must also finally take shape: an appropriate price for CO₂ that helps push especially the CO₂-intensive primary energy sources out of the market.