Diesel cars continue to fall out of favour with people interested in buying a new car in Germany. In a survey commissioned by the German Energy Agency (dena), 17 percent of potential car buyers said they planned to buy a diesel car, compared to 21 percent a year ago. However, alternative propulsion systems did not benefit from this shift: only 10 percent of respondents said they planned to buy an electric car, compared to 11 percent in 2016. A lack of charging infrastructure and high prices remained the most important arguments against alternative engine technologies, according to the potential buyers.
Petrol cars were by far the most popular: 52 percent said they planned to buy such a car, compared to 49 percent last year, according to the survey conducted by pollster Kantar Emnid.
The share of new cars sold with diesel engines currently stands at 34 percent, while pure electric cars make up a mere 1 percent of new registrations (see graph).

Read the item Diesel registrations continue to drop in Germany and the dossier BMW, Daimler, and VW vow to fight in green transport revolution for background. 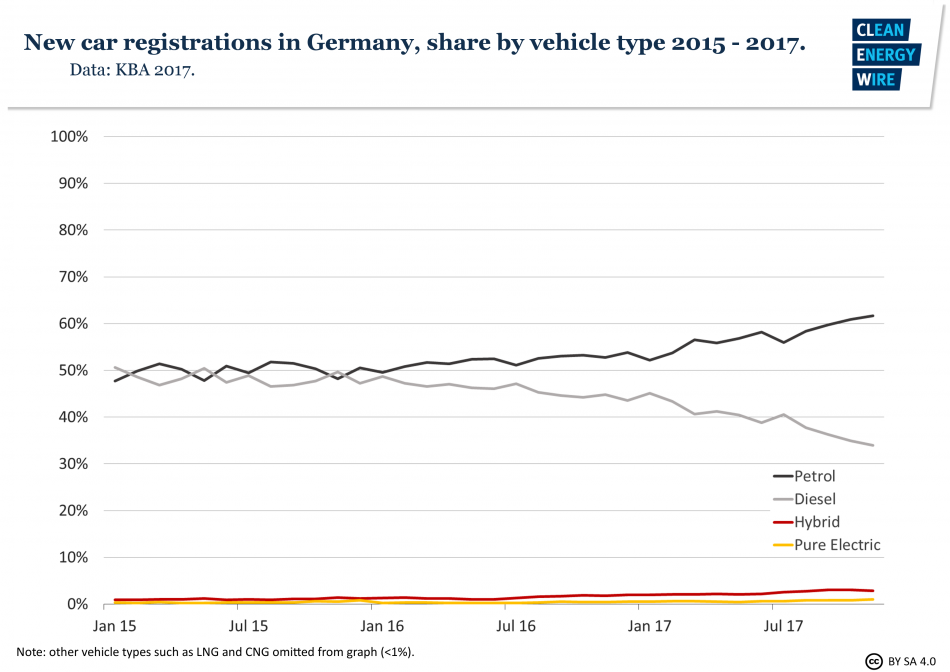 The Social Democrats (SPD) have compiled a list of 11 topics to be addressed during talks with Chancellor Angela Merkel’s conservatives on renewing a grand coalition of Germany’s two largest political camps. Talking point number 11 is entitled “For climate protection and a successful Energiewende”, and says that Germany must pursue ambitious climate targets at home and abroad in order to preserve its industrial base. “This also entails the implementation of the Energiewende, including the consistent roll-out of renewable energies.” In what appears to be a reference to a coal exit, which is not directly mentioned, the section continues: “Regions affected by structural change will have to be supported financially to develop new economic structures and create new industry jobs”. Other talking points include the strengthening of the EU; safe jobs; gender equality; and education.
SPD party head Martin Schulz said on 7 December that a coal exit was inevitable for Germany to reach its climate targets, but the shift must not come at the expense of workers.

Find the paper in German here.

Find plenty of background in Coalition watch – The making of a new German government.

Shares in RWE renewable spin-off Innogy fell more than 13 percent after a profit warning blaming continued problems at its UK household business Npower, report Nathalie Thomas and Tobias Buck in the Financial Times. Other German utilites were also affected. The shares in majority owner RWE lost more than 12 per cent, while stocks in E.ON — which also owns a large UK operation — fell almost 5 per cent.

Find the article in English here (behind paywall).

The Association of German Family Businesses has criticised the Federal Network Agency’s (BNetzA) decision to increase the maximum remuneration rate for onshore wind power auctions, Klaus Stratmann writes in Handelsblatt. The business lobby says the BNetzA’s move was an “unacceptable step backwards”, as guaranteed remuneration for wind power had to fall and eventually disappear rather than increase, Stratmann writes. The BNetzA has recently raised the maximum remuneration to 6.3 eurocents per kilowatt hour in order to guarantee that bidders can operate their installations at a profit and to prevent a slowdown in expansion.

Energy experts in Germany’s most populous federal state of North Rhine-Westphalia (NRW) have slammed plans by the state government to tighten regulations for the construction of new onshore wind power installations, Dow Jones Newswires reports. The plan to set minimum distances from residential premises to 1.5 kilometres was “neither legal nor practical”, the associations of cities and municipalities in NRW said in a joint statement. The policy pursued by NRW’s government coalition of the conservative CDU and the pro-business FDP was “irreconcilable with federal law”, a foundation specialising in renewable energy law said. NRW’s association for renewable energies said the measure was likely to lead to a standstill in wind power expansion in the state.

The ongoing transformation of Germany’s energy system towards decentralised renewable power sources could reduce the country’s dependence on fossil fuel reserves in the event of a major blackout, Peter Lauwe of the Federal Office of Civil Protection and Disaster Assistance (BBK) told the Clean Energy Wire. “Emergency power could be increasingly provided by renewable sources”, Lauwe said at a BBK conference on an organisational reform of Germany’s fuel supply during large-scale blackouts. However, Lauwe added that replacing major fuel depots by wind and solar power installations as an emergency fallback required a sophisticated management of decentralised sources that so far does not exist. “But we are confident that this will change in the next years”, he said.

Note: The Clean Energy Wire will publish an article on this topic later today.