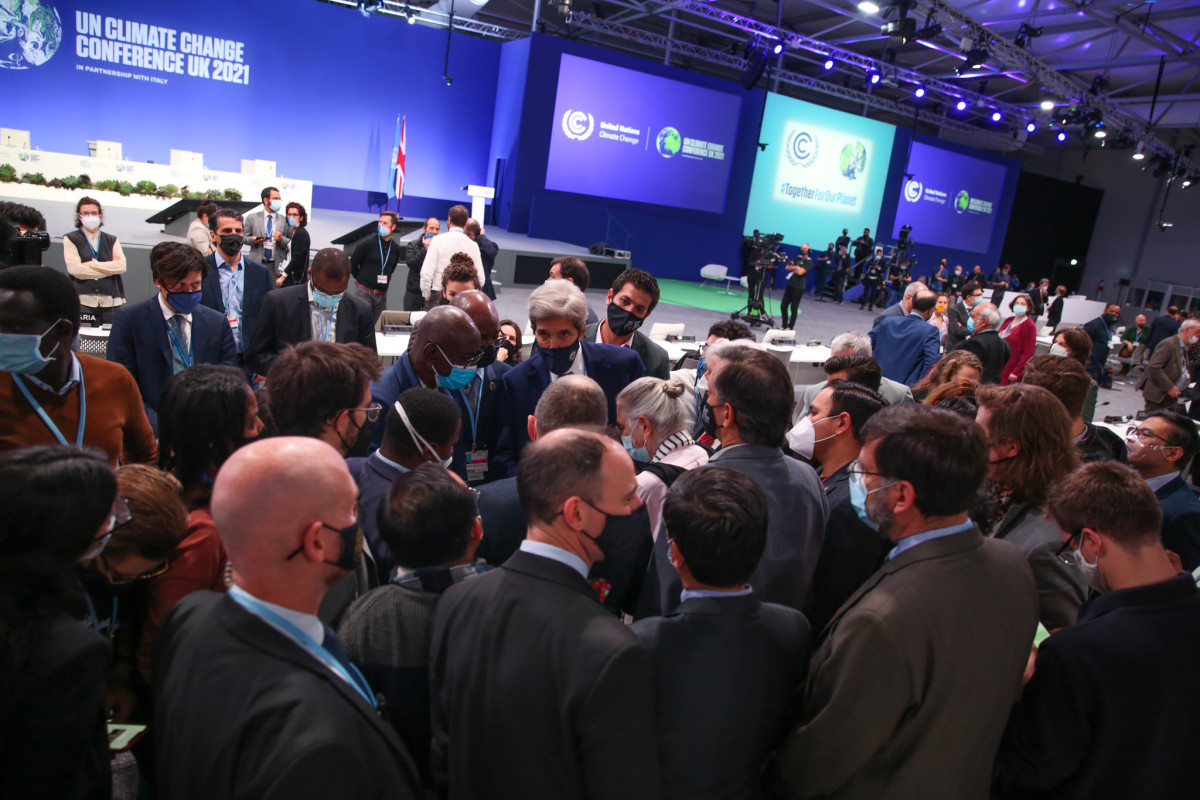 197 parties decided on the Glasgow Climate Pact on Saturday 13 November - but left some details on the voluntary carbon market open. Photo: Klara Worth, UNFCCC.

Negotiators in Glasgow reached a breakthrough on the rules for global carbon emission reduction trade. After five years of unsuccessful deliberations since the Paris Agreement laid down the framework for a new market where states and private entities can generate and trade carbon offset credits, COP26 finally saw agreement on the “rulebook” for this new market, which proponents see as a way to increase climate ambition in both developed and developing countries. However, critics say it could result in greenwashing and nothing but shifting CO2 credits from one side of the world to the other without any benefit for the atmosphere. Whilst the worst loopholes that would have allowed the double counting of the same emission reductions have been fixed and a share of the money generated in the trade will go to climate change adaptation in the global south, other areas remain dangerously unspecified and could allow for a continued sprawl of a largely uncontrolled voluntary carbon offset market.

Negotiations at the UN climate summit COP26 have closed the biggest loopholes for a future market where states and private entities can generate and trade carbon offset credits, but brought no clarity on voluntary trade. Countries also agreed that some of the money from the new global carbon offset trade will go to climate change adaptation and a small share of CO2 reduction credits will be deleted to ensure an overall win for the atmosphere. With these key elements, all 197 states at the Glasgow meeting, which ended on Saturday 13 November, could agree – even though they all had to make some painful compromises.

Pill Germany had to swallow: partial carry-over of old credits

In order to reach this deal, the German delegation had to concede to some of the developing countries that they would be able to continue using a certain number of old emission reduction credits, generated under the rules of the Clean Development Mechanism (CDM) of the Kyoto Protocol and widely seen as very low in quality (i.e. providing very little or no additional and permanent reduction in CO2). Germany had opposed the use of these credits but ultimately accepted the compromise, the environment ministry said in a press release.

The use of old CDM credits is limited to those generated after 2013. German NGOs were disappointed with this outcome but said it could have been worse if all potential old credits had been allowed to flood the new market and introduce even more “hot air” into the system.

“The number of certificates that enter the system in this way without additionally serving the climate is not known exactly. The announced expert group of the UN secretary general on the accountability of announcements by non-state actors must establish clear rules so that companies do not stock up on second-rate certificates in order to achieve their climate neutrality goals on paper," said climate policy expert David Ryfisch of NGO Germanwatch.

"All private actors should actively contribute to this and only use certificates verified according to the new UN standards now created."

Both NGOs and the German government expressed relief over the patching up of the worst loopholes on the double counting of emission reductions. “The new rules prohibit double counting and consistently implement Article 6 of the Paris Agreement. This ensures that trade really does lead to more climate protection,” the environment ministry writes.

Double counting avoided – for part of the future market

Several proposals on how to fix the issue of doubline counting, i.e. when both the country where the emission reduction takes place and the country that buys the reduction certificate claim to have avoided a tonne of CO2, had been in the run during the negotiations in Glasgow. In the end, only one part of the latest idea to create two different kinds of credits was agreed on, while the states refrained from making explicit rules for the voluntary carbon market outside the officially authorised units.

What’s missing from the Glasgow rules on the carbon markets is explicit guidelines for the voluntary market, private projects that are happening outside a country’s NDC or are not adjusted for in the country’s carbon budget. These emission reductions certificates can still be sold to corporate emitters or other non-state actors, who could use them to claim that they are reaching “climate neutrality”.

Companies who set themselves net-zero emission targets often find that reducing all of their own emissions is not possible in the short term. To neutralise emissions in their operations, value chain or outside their direct sphere of influence, they therefore make use of carbon offset credits.

The emission offsets are generated by project developers who mostly invest in climate action in developing countries: energy efficient cookers in Nepal and Madagascar, installing wind turbines in India, operating biomass plants in Nigeria or protecting rainforests in Indonesia.

To proof the offset’s quality to customers, many projects use an external quality standard provider which checks the emission reductions achieved and also issues the credits that the project developer can sell.

The voluntary carbon offset market thus describes the generation, selling and buying of the CO2 reductions achieved by project developers and certified by the standards.

To count the emission reduction towards its net-zero goal, a company has to delete the credits it buys to ensure that no further use of the same tonne of reduced CO2 can occur.

The environment ministry believes that “the rules under Article 6 of the Paris Agreement also offer actors in the voluntary offset market a clear standard for the use of climate protection certificates.” Flasbarth said that “additional robust rules will be established for this purpose. All private actors should actively contribute to this and only use certificates verified according to the new UN standards now created."

Anne Gläser, policy advisor on carbon pricing at Germanwatch, agreed that additional regulations for the voluntary market would be needed. “It is very positive that there will be no double counting in the NDC use [of carbon credits]. However, it would be dramatic if these rules did not also apply to the voluntary market,” she told Clean Energy Wire.

"Ultimately, governments or courts may start regulating what claims companies can truthfully make in association to carbon credits that are not backed by corresponding adjustments," voluntary carbon market expert Lambert Schneider from the Institute for Applied Ecology (Öko-Institut) writes.

Siegfried Russwurm, president of German industry association BDI, said that the Article 6 rulebook is “very relevant from an industry perspective” as it prepares the ground for the “cost-effective instrument” that is international emissions trading.

Other elements of the new carbon market rules

Two percent of the officially authorised and traded emission reduction credits will be cancelled to achieve an overall cut in greenhouse gas emissions.

Five percent of the proceeds from offset trades will be funnelled into the Adaptation Fund that supports poorer nations in their efforts to combat the effects of climate change, but no such tax will apply to the bilateral reduction trades between countries.

To strengthen the integrity of trading in mitigation credits, an independent complaints procedure will be established for the new market. Human rights organisations, NGOs and representatives of indigenous peoples can use this in case of problems or deficiencies with climate action projects that generate certificates for the offset trade.