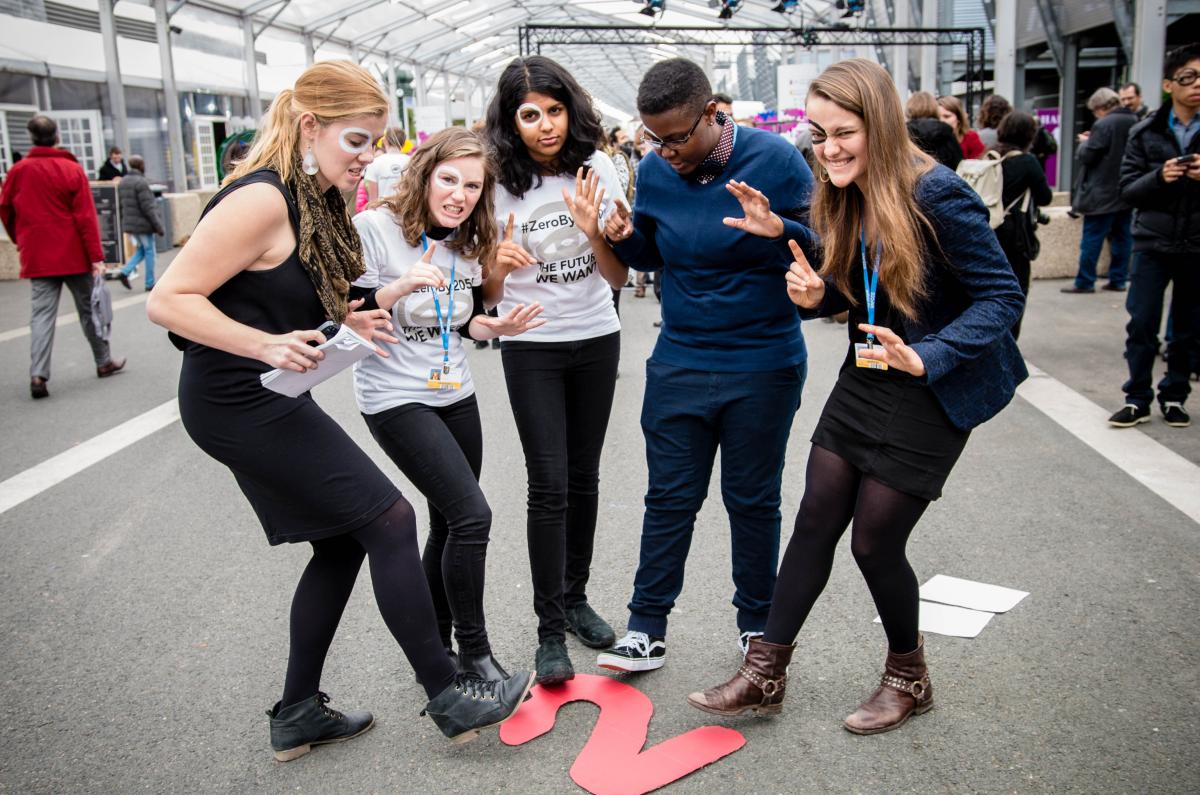 Trampling on the 2°C warming target: "1.5 to stay alive" was the slogan of the 'Youth Action in Solidarity with Climate Vulnerable Forum' at the COP21 in Paris on Wednesday. Photo: SustainUS.
Day 3 at the UN climate conference: Today's official theme is resilience, with divestment and renewables featuring in others of the many side events / Germany insists on strong monitoring mechanism in agreement / ambitious pace for negotiation proceedings outlined

Negotiations are underway and the official theme of Day 3 at the Paris climate summit is resilience, with divestment and renewables featuring in some of the other many side events. Additionally the German delegation decided to brief the press on their ambitions for "MRV" – Monitoring, reporting and verification, which it considers one of the most important parts of a new climate agreement. As the new treaty will be built on states making national pledges to reduce greenhouse gas emissions, it would be pivotal to have a good MRV architecture in place, said Karsten Sach, head negotiator of the German delegation. Monitoring, reporting and verification always sounded “terribly unsexy”, but was a very important part, he added.

A remark by Jochen Flasbarth, state secretary at the environment ministry, shows just how important a well-constructed and reliable monitoring system is to the Germans: Germany would not agree to any trade-offs regarding MRV, not even in exchange for getting the long-term goal “decarbonisation” into the final text, he said in November.

The EU and Germany are promoting a universal system of mandatory reporting by all countries, with generally accepted methods. Sach said there could be different obligations how often and how detailed countries would have to report their CO2 emissions: “China and Germany have to report more intensively than Tuvalu.” Because of these distinctions, MRV is also under close inspection with regard to "differentiation”. Germany argues that differences in measuring and reporting obligations should not be tagged to historic responsibilities for climate change, but rather to current capacities for implementing an MRV system. Another possible stumbling block were countries' sovereignty concerns, Sach said.

Germany has helped over 30 countries with developing their initial climate action plans (INDCs) and takes part in the MRV Trust Fund initiative which will help partner countries like Costa Rica, Ghana and Vietnam to establish the necessary institutions and capacities, the environment ministry announced.

The French presidency proposed an ambitious pace to bring forward work on the climate treaty – by Thursday, a draft text is to be conceived by the negotiators. This will be developed further until Saturday, so government Ministers, who will arrive on Sunday, can take things up a notch in their high-level meetings next week. EU negotiator Sarah Blau said the coming days would be crucial for developing a concise text.

Elina Bardram from the EU Commission added the EU saw its role as a bridge builder in the negotiations. She too highlighted the importance of a strong monitoring, reporting and verification system. Such a system would not be punitive, she said. The EU still strongly favours legally binding mitigation targets, but Bardram indicated that they might have to meet other countries like the US on a common middle ground to find a compromise.

Civil society representative Lies Craeynest from Oxfam warned that the EU should be careful to stay visible in the negotiations and “not be locked out of the room in the final minutes like in Copenhagen”.

“Progress in negotiations is slow - as if we wanted to stay for three weeks in Paris, instead of two,” Germany’s chief negotiator Karsten Sach said. There was still a mismatch between the heads of state announcements from Monday, the demands of civil society, and what what negotiators were doing, he said. Brackets in the draft agreement were not cut as quickly as one could hope for, even though some groups talked till late in the night last night.

Initiative 350°org announced the latest figures of its divestment campaign, saying that more than 500 institutions around the world had made divestment commitments amounting to over $US 3.4 trillion. Since September, the city of Münster has become the first German town to divest completely from fossil fuels. The Protestant Church in Hesse and Nassau, who manages a €1.8 billion budget, agreed to drop investments in coal, oil and gas. Most prominently, insurer Allianz divested €630 million of their capital investment portfolio, 350°org listed. “The divestment move by Allianz is a real cultural shift in Germany,” said Pascal Canfin, Senior Advisor for International Climate Affairs at the World Resources Institute (WRI).

International initiatives pledged $US 1 billion to protect the vulnerable from extreme climate change, the UNFCCC announced on Wednesday. Germany gave € 150 million to the “G7 InsuResilience”, the climate risk insurance for the poor, agreed at the G7 summit in Elmau this year. The money will be used to set up the initiative and start the first phase of implementation, the UNFCCC said.