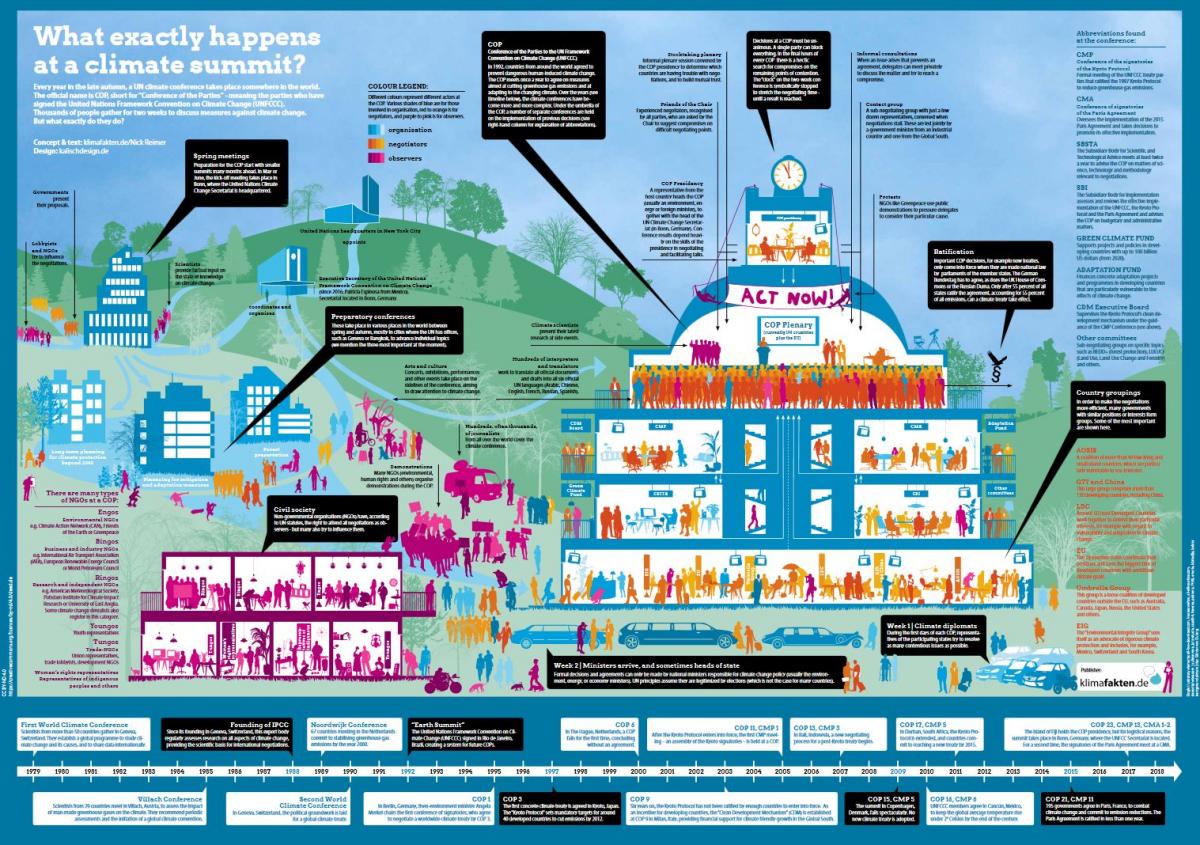 The German delegation said that the first day at this year’s UN climate conference in Bonn did not show any signs that the negotiators would have to navigate stormy waters from the start. The atmosphere was very good, and “a successful and dignified opening ceremony” came “without any nuances that would have made a positive start more difficult”, said Jochen Flasbarth, state secretary in the environment ministry, at a morning press conference on 7 November.

The adoption of a final agenda for the coming two weeks already on day one was a positive start. Unlike in Bonn, at previous COPs the adoption of the agenda was often already used to disrupt the conference, said Flasbarth. “I know it may sound odd sometimes where we see progress, but we passed an agenda – and not a preliminary one, but a final agenda.”

Flasbarth said he was hopeful that negotiations this week would be led in a constructive manner. “We will see how this will develop when political personnel arrive this weekend.”

In an attempt to amend the agenda, developing countries on the first day insisted on a focus on pre-2020 activities, but the plenary accepted Fijian prime minister Frank Bainimarama’s proposal to instead handle the issue in informal consultations. These will be moderated by the Moroccan delegation.

It was a good sign that ramping up ambition on climate was a priority for both developing and developed countries, Inga Fritzen Buan, Senior Advisor Climate and Energy at WWF-Norway, told Clean Energy Wire. However, developing countries stressed during the negotiations “that pre-2020 action must continue to remain a priority, alongside discussions about meeting longer-term targets.”

State secretary Flasbarth advocated talking about the pre-2020 ambitions on the sidelines of the conference “without it receiving the charged nature of an agenda item.” One major issue regarding the pre-2020 action is the ratification of the Doha Amendment to the Kyoto Protocol which would extend it until 2020, said Flasbarth.

As of 31 October 2017, 84 countries have ratified the amendment, but 144 are required for it to enter into force. Germany and the EU have not yet ratified it. Germany’s ratification has long been ready for submission, but the European Union strives for unanimous backing from all member states, said Flasbarth, and added that he had been assured that the last remaining country was soon expected to ratify. In October 2015, Poland’s president unexpectedly vetoed the amendment, arguing that the country needed more time to analyse its impact on the economy.

It was unclear what would happen now at the Bonn conference, said WWF’s Fritzen Buan. “Fiji has probably been a little bit surprised by this proposal from the Like Minded Group of Developing Countries (LMDC) to formally bring pre-2020 action back on the agenda, after it has not been there since Paris,” said Fritzen Buan. Consultations were planned until Saturday, when Fiji would “hopefully come back with a proposal for the way forward. It’s very hard to say what that would be [and] whether it will result in a COP decision, or a plan for a process next year.”

The Turkish delegation had planned to try and amend the agenda with an item concerning its status under the UNFCCC, and particularly its eligibility to climate finance, said State Secretary Flasbarth. But Turkey eventually refrained from tabling the amendment, after moderation by the German delegation.

Flasbarth who is the head of the German delegation at the climate summit, is also in charge of the talks with Turkey about its status. “Indeed, it would have been of little help now if we had a procedural agenda discussion at this point. The Turkish understood this and did not come forth with the amendment”, said Flasbarth.

While negotiations on an international level are underway in Bonn, political parties in Berlin are still in the process of shaping their agenda for the next four years in government. To help them agree on climate-friendly policies, a group of 50 companies (such as Adidas, Puma, ALDI Süd, Deutsche Telekom, Nestlé, SAP, Otto, E.ON, EnBW, Siemens,  and Metro) with a combined global turnover of 350 billion euros have launched a petition, calling for a “reliable socially acceptable exit path for coal power”, and a CO2 price that would send an effective price signal to investors. The new government should also consider ending fossil fuel-related subsidies by 2025, and increase the 2050 climate target to a 95 percent reduction of greenhouse gas emissions. The companies would like to see a “smart policy framework” and regulations that enable a low-carbon transition.

Currently, a gap exists between what countries have promised to achieve in emissions reduction and what would be needed to adhere to the Paris Agreement’s goal of limiting temperature increase to well below 2 degrees Celsius, according to the UN Emissions Gap Report. It was released in late October and presented at the German pavilion at the COP on 7 November. 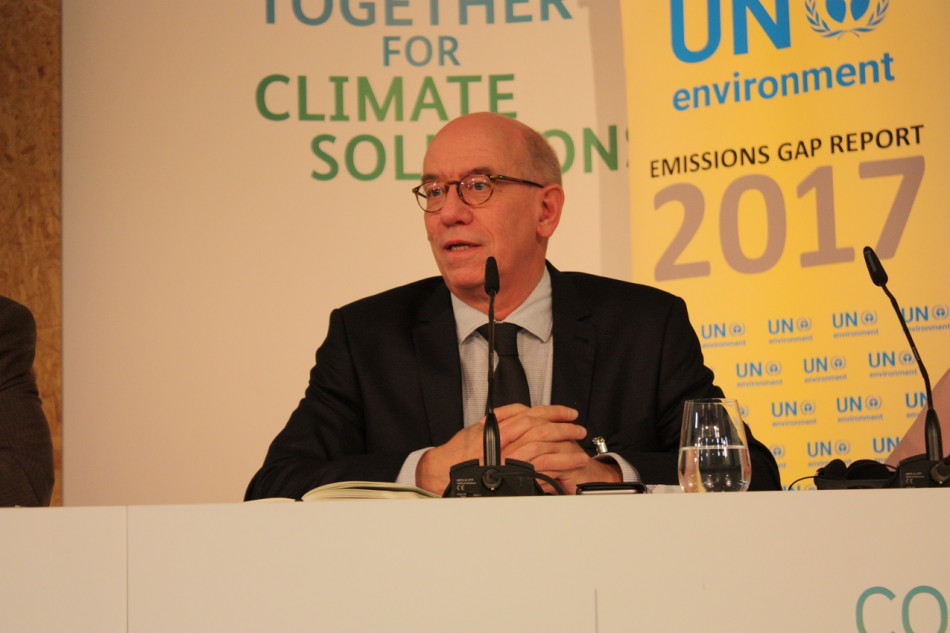 The report found that the gap between the full implementation of what countries have promised in their nationally determined contributions (NDCs) and what would be in line with the 2° Celsius scenario laid down in the Paris Agreement would be 11-13.5 gigatonnes CO₂ equivalents (GtCO₂e) in 2030. This would roughly be equal to China’s total emissions that year, John Christensen, director of the UNEP DTU Partnership and co-author of the report, said at a press conference. The gap in the case of the 1.5°C target is 16 to 19 GtCO₂e.

This gap would lead to a temperature increase of 3-3.2 degrees Celsius by the end of the century. The report sees the most promising options for reducing the gap in wind and solar power expansion, energy efficiency appliances, passenger cars, reforestation, and reducing deforestation.

The gap report’s findings are not surprising, said State Secretary Flasbarth. But they show that with the existing targets, “we’re already in a world that focuses on climate protection”, and that the international community is trying to dampen the temperature rise foreseen due to climate change.

The gap shown in the UN report was the scientific starting point needed to boost collective global efforts to reduce emissions, which are the sum of the individual countries’ plans. “And that’s what we are talking about in the negotiations here in Bonn”, said Flasbarth.

Countries at the COP need to find a common understanding of “where we currently stand”. For this, scientific input is important, but so is agreeing on how to measure climate protection efforts, how to report on them, and how to ensure compliance with the Paris Agreement.

Get in touch if you have any requests, questions or suggestions.
Ellen Thalman