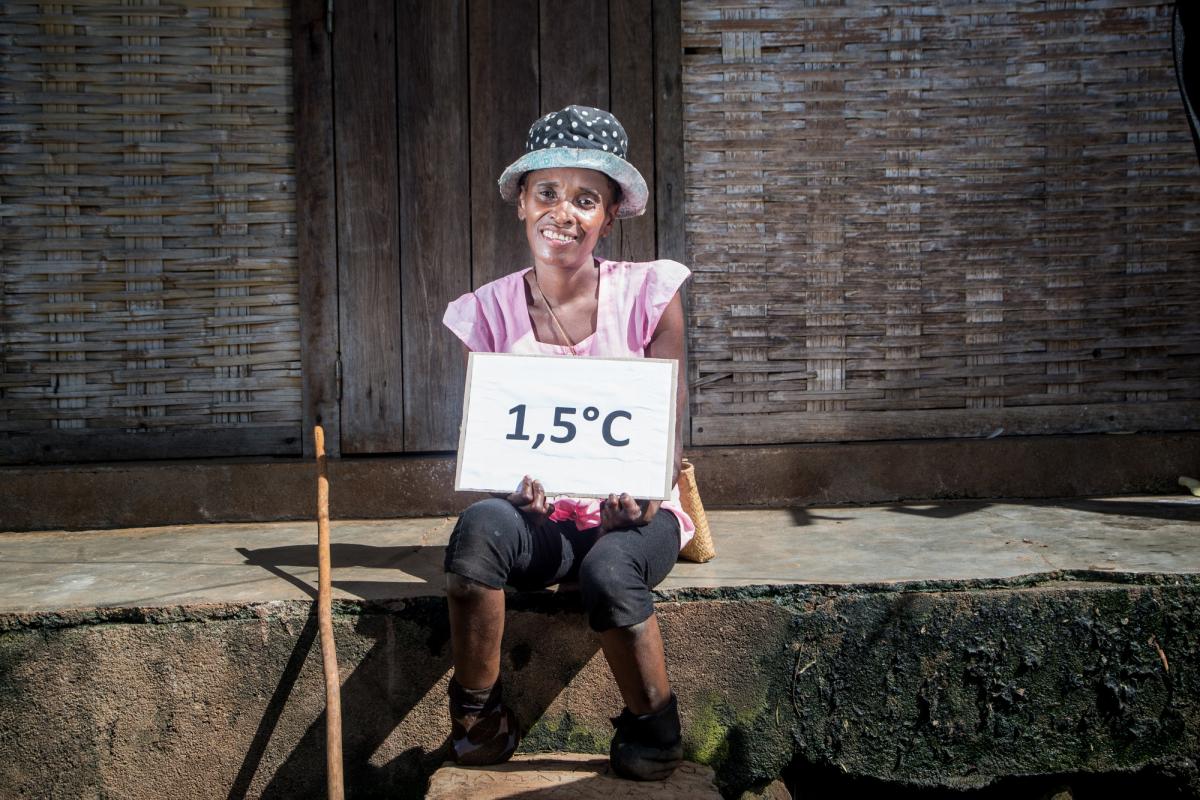 Germany has responsibility to act against climate change – Chancellor Merkel

Highly industrialised countries like Germany have to advance environmental technologies, invest in these technologies, and find ways to make these competitive as fast as possible, German Chancellor Angela Merkel said in podcast on the weekend. “These are tasks for the developed countries, including Germany, because we have emitted much more CO2 and have therefore a responsibility to change things”, Merkel said. She reminded industry that moving jobs abroad to places where environmental standards were lower was not helping the climate. She will address the COP session in Bonn on Wednesday, 15 November.

Germany would have to step up its climate mitigation efforts, particularly in the transport and buildings sectors, Merkel said. Her next government would make a case for new tax incentives for building insulation, and make a “mighty” push for more e-mobility and alternative fuels.

Protests against US event on "cleaner fossil fuels"

Dozens of climate activists staged a protest in a meeting room where the US administration held an event on “the role of cleaner and more efficient fossil fuels and nuclear power in climate mitigation” on Monday evening that also included a number of company representatives from the fossil and nuclear industry. The group of protesters had filled much of the room, at one point standing up to sing a song against fossil fuels. After leaving the room, they continued chanting “no more coal, no more nukes”, holding up a banner “Keep fossil fuels in the ground”. 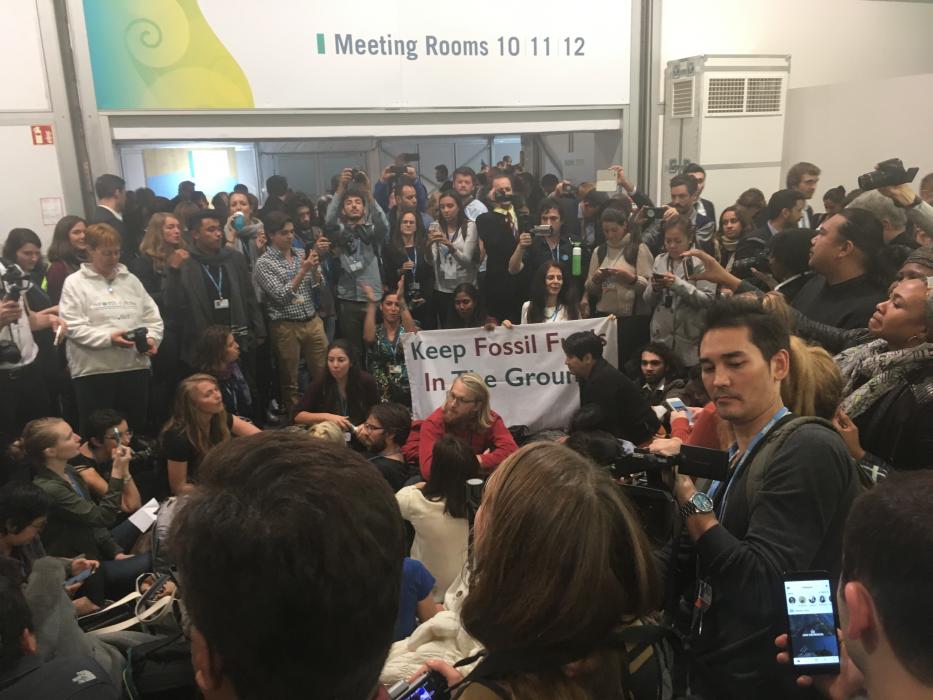 Peruvian farmer Saúl Luciano Lliuya has achieved his first success in his lawsuit against German energy company RWE. “It’s the first time that a court has decided that co-perpetrators of climate change are generally obliged to pay for protection against risks that others face because of a changing climate”, Lliuya’s lawyer said. The higher regional court in Hamm found on 13 November that the case will continue to be heard and Lliuya can present evidence that his village is under the threat of flooding from a melting glacier brought on by climate change, and that RWE, operator of Germany’s most polluting utility, is partially responsible for this. Lliuya, who is supported by NGO Germanwatch, wants RWE to pay for protective measures around the glacial lake near the village proportional to its share in global emissions (around 0.5 percent, according to Germanwatch) that have caused global warming. The laws in many countries are similar to those in Germany, so the case could set a precedent for several lawsuits of this kind, Germanwatch said in a press release.

Find the RWE take on the case (in German) here.

Germany will support the Marshall Islands, a small archipelago nation in the central Pacific Ocean, in reaching its ambitious climate goals by financing a low-emission maritime shipping project. Small island states usually encompass a vast and remote chain of islands, and maritime shipping is essential for their economic survival, said German Environment Minister Barbara Hendricks when presenting the project in the German pavilion in Bonn. “This project is supposed to set an example for other countries in the region when switching to low-emission ocean transport”, said Hendricks.

The maritime shipping sector is the Marshall Islands’ biggest consumer of fossil fuels and source of greenhouse gas emissions. As part of the German environment ministry’s International Climate Initiative, this new project will examine alternative low-carbon propulsion technologies and then equip one ship with the selected system. The German government funds it with 9.5 million euros. 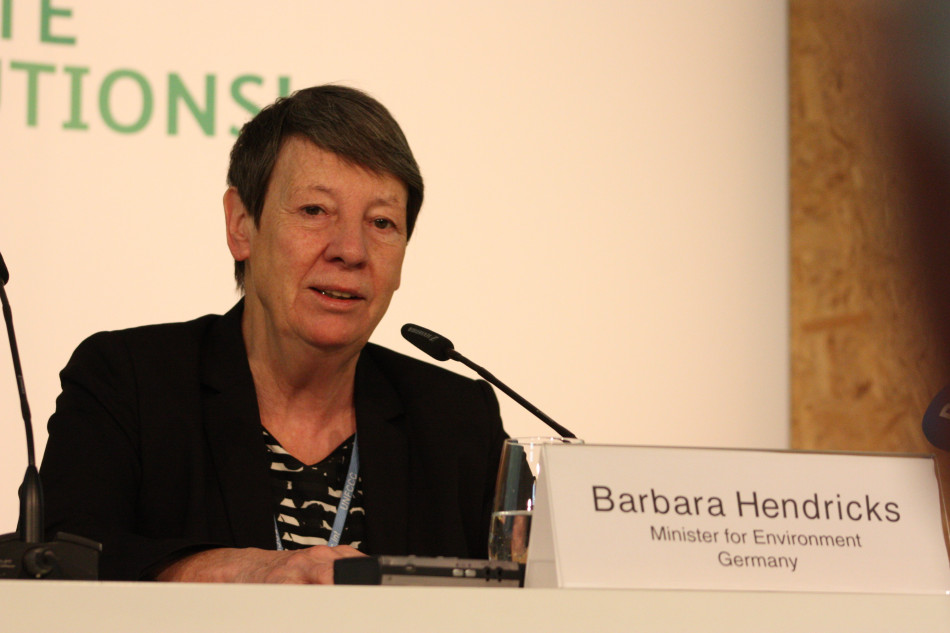 The Marshall Islands is already a member of the NDC Partnership, a coalition of countries and institutions aimed at supporting developing and emerging countries in reaching their climate goals. Launched at the COP22 meeting in Marrakesh by Morocco and Germany, the NDC Partnership aims to enhance cooperation so that countries have access to the technical knowledge and financial support they need to achieve the goals set out in their nationally determined contributions (NDCs).

At the request of the Fijian COP23 presidency, the German government, together with other partners like Australia and the UK, will open a regional hub in Fiji’s capital Suva to advise the small island states on how to reach their climate targets and to support regional cooperation. Key projects will focus on exiting fossil fuels, agriculture, and economic diversification. Small island states depend on fossil fuels for 80-90 percent of their energy needs, and droughts have been a major issue for these countries’ subsistence agriculture. The project will officially be presented in Bonn on 14 November.

EU named Fossil of the Day

The EU, the US, and Canada have received the dubious Fossil of the Day award from the NGO Climate Action Network (CAN) for dragging their feet on loss and damage finance. The issue is a particularly important concern for the Pacific island states, which are already suffering from the impacts of global warming. Even though an official COP decision on the Warsaw International Mechanism for Loss and Damage (WIM) includes a mandate to secure finance for it, the two countries and the EU were “seeking to twist, water down, and delete references to finance from the loss and damage decision text”, CAN said.

Global CO₂ emissions from fossil fuels and industry are projected to rise by about 2 percent in 2017 compared to last year, according to The Global Carbon Project’s annually updated Global Carbon Budget 2017. “The return to growth in global emissions in 2017 is largely due to a return to growth in Chinese emissions”, said the document’s co-author, Glen Peters, research director at CICERO in Oslo. It is too early to say whether the increase should be considered a one-off event on the way to a global peak in emissions, or an indication of rising emissions in the coming years.

Emissions in Europe are tentatively expected to decline by 0.2 percent in 2017. This rate is lower than the annual 2.2 percent decline averaged over the previous decade (EU GDP up about 2.3%), says the document.

An alliance of 20 French and German NGOs has sent a letter to French President Emmanuel Macron and German Chancellor Angela Merkel, calling on them to commit to stronger climate action ahead of their scheduled appearance at the COP23 conference in Bonn on 15 November.

Both countries should “use their position as the biggest economies in Europe to push for an ambitious climate policy”, said Christiane Averbeck, managing director at Climate-Alliance Germany, at a press conference in Bonn. Merkel and Macron should “become climate heroes”, she said.

“The beginning of the new legislative periods in both France and Germany opens a unique window of opportunity to further strengthen the German-French tandem, and to push for a more ambitious climate agenda at the heart of a renewed European project”, reads the letter. The EU needs to raise its climate targets to be able to meet the Paris Agreement goals. Five steps must be taken:

Germany and France have entered a “different stage” of cooperation with the entry into power of Emmanuel Macron’s government and the emergence of a “new spirit in French society”, said Jochen Flasbarth, state secretary in the German environment ministry, at an event dedicated to Franco-German cooperation in the field of climate policy held at the conference’s Talanoa Space. 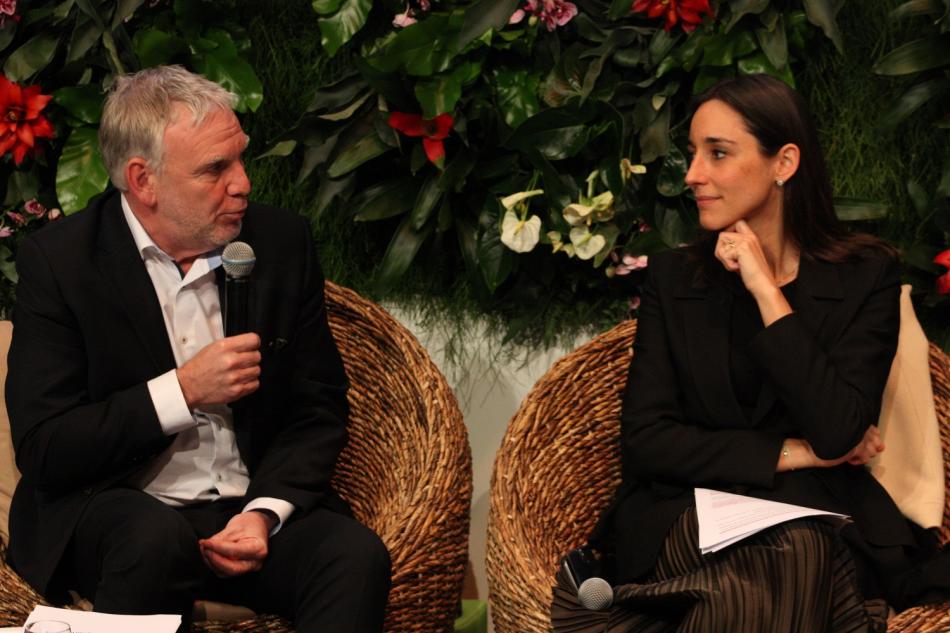 It would make sense to start this renewed cooperation between the two administrations by pushing for a common carbon floor price, which would also represent a first step toward a more ambitious climate action, commented Brune Poirson, state secretary in the French environment ministry.

The recent proposal for the revision of the EU’s Emissions Trading System (ETS) identifies potential measures to effectively reduce carbon emissions. For example, EU member states will have the option of cancelling ETS allowances linked to closed power plants. “Let’s not waste time” on a EU CO₂ floor price, “the momentum is not there”, said Flasbarth. He said he saw little chance for a joint European effort, and added that such a floor price was not part of the recent ETS reform deal.

Migrating Adaptation Fund into Paris regime - "We're ready to do it"

The German government is willing to support migrating the Kyoto Protocol’s Adaptation Fund into the Paris Agreement regime. “We’re ready to do it. However, I do not know if the other industrialised nations share this position”, said Environment Minister Hendricks.

Germany was willing to do this now, a spokesperson of the environment ministry told the Clean Energy Wire. However, the country is part of the joint EU negotiating team and cannot decide this issue on its own. It is not yet clear, whether the decision on the adaptation fund's future will be taken in Bonn.