CORRECTION: The headline of an earlier version of this article stated that the number of jobs in Germany's entire renewables sector has halved since 2011. However, this decrease only affected production and installation and not operation and maintenance jobs, where employment actually grew during the analysed period.

The number of jobs in the German renewables sector (production and installation) has almost halved from about 300,000 in 2011 to around 150,000 in 2018, the German Trade Union Association (DGB) found in an analysis of employment in the energy transition. At the same time, the number of jobs in operation and maintenance of renewable power installations grew from about 50,000 to 80,000 during this period. The overall drop in employment has been mostly due to the collapse of Germany's solar power industry over the past decade, as many companies were forced out of business thanks to cheaper competitors from China scooping up most of the market. The number of jobs in solar PV panel production and installation fell from a record 133,000 in 2011 to under 28,000 seven years later. In the wind industry, employment dropped from its record level of roughly 108,000 in 2016 to under 70,000 just two years later. "Employment with respect to construction renewable energy installations has been very dynamic in the last 20 years, both in a negative and in a positive way," the DGB said, arguing that many more jobs could be created in the sector again.

Development in the segments operation and maintenance overall has been positive, with the number of jobs growing constantly since the year 2000, especially in the onshore wind industry. Thanks to the large installed capacity of renewable power sources, employment here will be less susceptible to political decisions, the DGB argued. However, 60 percent of jobs in the renewables sector are still in production – "and the lowest point here might not have been reached yet," the union warned. The DGB also said that other analyses have given quite different levels of employment in the sector, arguing that a better definition and standardisation of what is counted as jobs in the renewables industry is needed. A study by the SPD-affiliated Friedrich-Ebert-Foundation (FES), for example, put the number of jobs in 2018 at 284,000 and estimated that employment could grow to 400,000 by 2040. "But this prognosis is based on much higher renewables expansion levels than we currently see," the DGB said.

The union concluded that "employment in the renewables industry is still massively influenced by the political agenda," meaning that regulatory changes instantly translate into layoffs or hires. In order to stabilise employment levels in the sector, better planning security and reliable expansion paths for renewable power are needed, it argued. 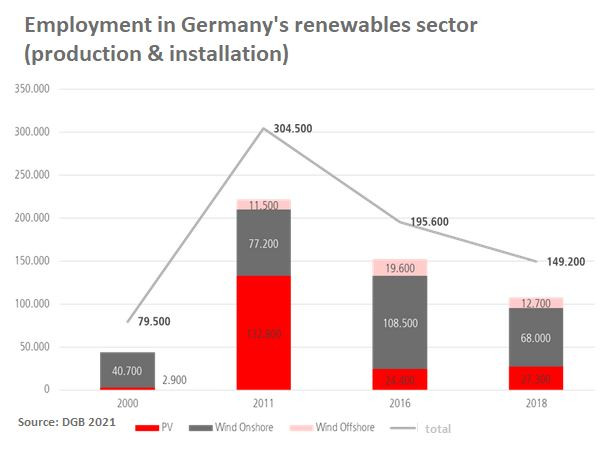