Day 11 at COP26: Germany and other EU countries call for nuclear-free taxonomy 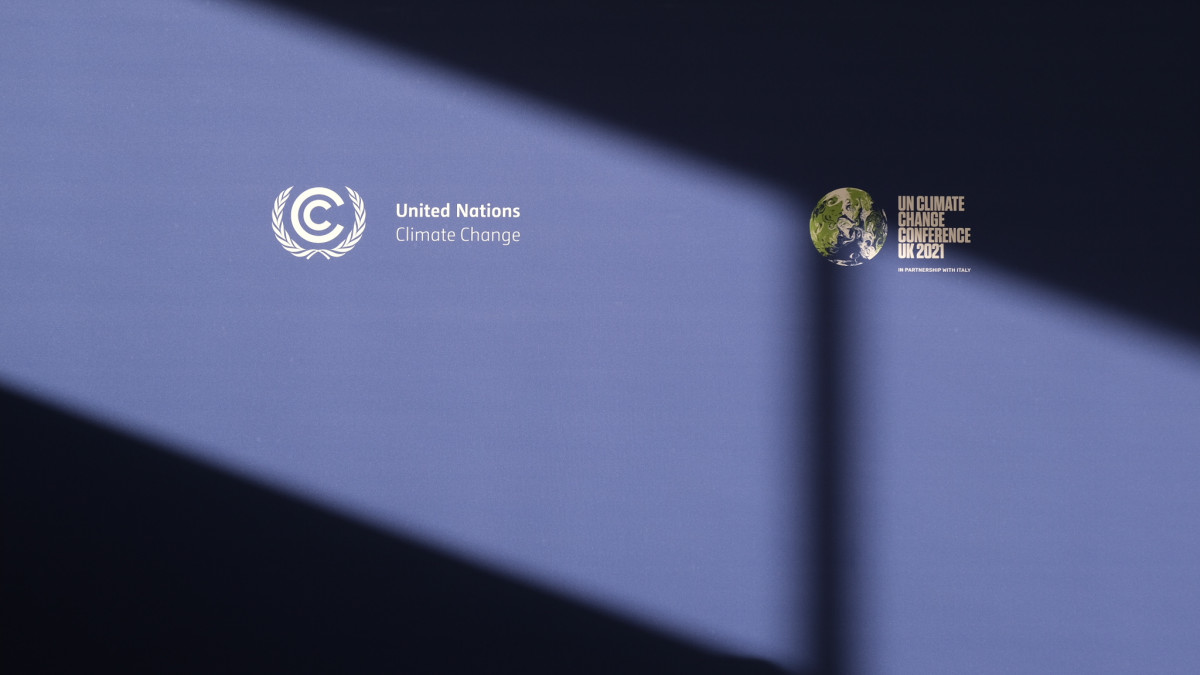 After a week of political announcements, ministers this week join their negotiators to hash out the nitty-gritty of the Paris Agreement rulebook and eyes are on a possible solution for carbon markets under Article 6. Meanwhile in Germany, the era of “climate chancellor” Angela Merkel is coming to an end and newly elected forces – including a strong Green Party – are negotiating the course of the next government coalition. CLEW tracks the latest views and comments from German officials, NGOs and other relevant news bits at the conference in Glasgow in a daily blog. 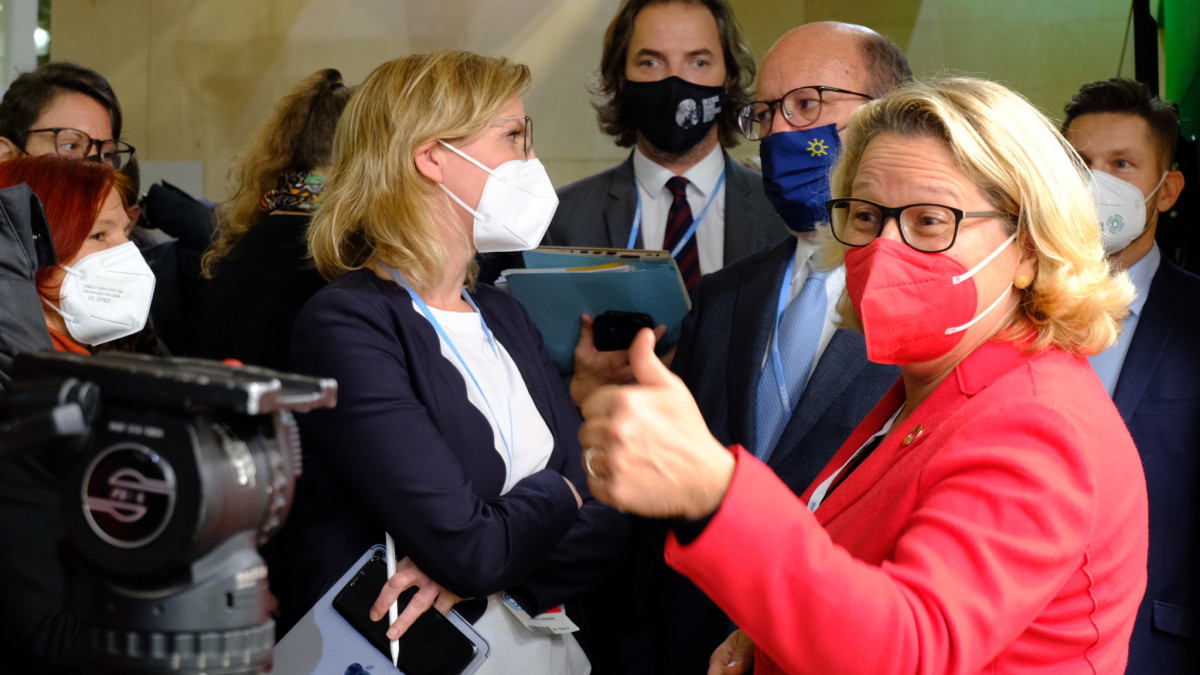 Germany and other EU countries call for nuclear-free taxonomy

Germany and four other EU member states (Luxembourg, Austria, Portugal and Denmark) have called for a nuclear-free EU taxonomy for sustainable investments on the sidelines of the UN climate summit in Glasgow. The group issued a “Joint Declaration for a nuclear-free Taxonomy” during a press conference at the German pavilion.

“Nuclear power cannot be a solution in the climate crisis,” said German environment minister Schulze. “It’s too risky, too expensive, and too slow to contribute anything to climate action in the decisive decades of the 2020s and 30s.”

Germany has led the call to keep nuclear out of the European Union’s green finance taxonomy for some time, countering an initiative of several other EU member states under the leadership of France to give nuclear power a greater role in the EU’s plans for decarbonisation and the greening of the financial system. The European Commission is set to come out with a proposal soon, which EU member states will then decide on with a majority vote, said an environment ministry spokesperson. In a tweet posted after a recent EU summit, during which leaders debated the taxonomy in the context of the bloc’s wider response to soaring energy prices, European Commission President Ursula von der Leyen said the EU needs renewables but also “a stable source, nuclear, and during the transition, gas. This is why we will come forward with our taxonomy proposal.”

While the German minister did not comment on the role of gas – a fossil fuel the current and prospective future government see as an essential transition fuel until enough renewables capacity is available – the other ministers also rejected labelling fossil gas as sustainable.

“Fossil gas cannot be a sustainable investment, either” said Austrian climate and environment minister Leonore Gewessler. “Just because something is less bad, it doesn’t mean it’s an option. We must label dirty and risky technologies as what they are.”

Germany’s last nuclear power plant will go offline at the end of next year. Given its parallel phase-out of coal power, Germany bets on a fast expansion of renewables and natural gas plants as a bridging technology. But renewables expansion in the country has been sluggish in the past years and Germany is facing opposition regarding its emphasis on gas, which many countries also reject to include in the EU taxonomy.

Later the same day, a panel debate at the German pavilion showed that the partners of Germany’s prospective next government coalition do not see eye to eye on the question of including gas. Minister Schulze came out in favour, saying “We support gas as a transition fuel and a way to replace coal in emerging countries. If we cannot finance gas, then coal will be prolonged.”

However, Green Party politician Jan Philipp Albrecht, Schleswig-Holstein state energy minister and part of the coalition negotiating team, said simply including fossil gas would be “market distortion to the detriment of renewables.” He cautioned that it is decisive to differentiate between fossil gas and green gases and the relevant infrastructure.

Beyond oil and gas alliance launched – without German participation

Ten countries and subnational jurisdiction have joined the first government-led initiative to phase-out the production of oil and natural (fossil) gas. The initiative, launched by the governments of Denmark and Costa Rica was supported by France, Greenland, Ireland, Québec, Sweden and Wales (as full members) and California and New Zealand as associate members.

The alliance aims to increase the attention paid to an oil and gas production phase-out in international climate dialogues and “create an international community of practice on the issue”.

Large oil and gas producing countries such as Saudi Arabia or the U.S. are absent from the list of supporters, as are Germany and the UK. It is “weak” of Germany not to join the alliance, Green Party MP Lisa Badum told Clean Energy Wire. But on the other hand, seeing that a country like France which is supporting nuclear energy, if not fossil fuels, was part of the initiative made the whole undertaking less credible, she added.

“The fossil fuel era has to come to an end, not because there aren’t any fossil fuels left in the ground but because governments decide to do the right thing,” Dan Jørgensen, Denmark’s Minister of Climate, Energy and Public Utilities said at a press conference in Glasgow. He added that the Beyond Oil & Gas Alliance (BOGA) is the first state-led initiative targeting the fossil fuel phase-out. Denmark itself is one of the EU’s largest oil producers and decided to end all production by 2050.

“The commitment made by these first movers is an essential first step towards a just transition away from fossil fuel production but is in itself insufficient to meet the challenge ahead,” NGO 350.org said in a press release.

The German government has welcomed a declaration of deeper cooperation on climate action by the U.S. and China, and has offered to support emissions reduction efforts. In order to limit global warming to 1.5 degrees, a “rapid race to catch up in climate action is needed this decade,” said environment ministry state secretary Jochen Flasbarth. “The necessary progress must come above all from the largest emitters.”

“Our hopes lie in the fact that China is now also taking on this responsibility and wants to reduce its emissions more strongly in cooperation with the U.S.,” he said. Germany had a long history of “intensive climate and environment cooperation” with China and would be happy to “help ensure that the greenhouse gas reductions are really substantial enough to make the necessary contribution to the 1.5-degree path.”

In a surprise announcement, China and the United States vowed to work together to slow global warming. Among other things, the world’s two largest CO2 emitters intend to cooperate on regulatory frameworks and environmental standards related to reducing emissions of greenhouse gases in the 2020s, and on curbing emissions of methane, a very potent greenhouse gas. Observers were split as to whether the declaration would help to ensure an ambitious outcome at the Glasgow conference or was designed to deflect from other issues and too vague to ensure tangible action.

The European Union has to take on a more active role in the negotiations at the UN climate summit, said policy analysts from the think tank European Council on Foreign Relations (ECFR). “As COP26 draws to a close, the moment for the EU’s climate leadership begins,” said Susi Dennison, head of the ECFR’s European power programme. The EU should use the power of its market and its investments abroad to push countries for more action, she added. However, the bloc is not yet a geopolitical force equal to the U.S. – one that can credibly threaten to use all aspects of its economic power to reinforce its position in international negotiations, she said. Instead, “European climate power comes from a capacity to enact change at a more practical level, through the EU’s interactions with countries of all kinds.”

NGOs have criticised that the EU has become invisible in the talks, but German environment minister Svenja Schulze told Journalists that the EU was a motor for progressive climate action and a strong presence in the negotiations.

Mats Engström, visiting fellow at ECFR, said the EU has a role to play in bridging “the North-South trust gap”. “Such action should include further upscaling of climate financing, strengthening green tech cooperation, and promoting low-carbon infrastructure,” he said.