At 45.3 percent in August 2016, the share of diesel cars in all newly registered passenger cars in Germany was at its lowest since March 2012, due to the emissions scandal, according to a study by the CAR Center Automotive Research of the University of Duisburg-Essen. “Diesel slowly falls out of grace with car buyers. The negative news reports unsettle. […] Dieselgate has left its mark,” says the study. 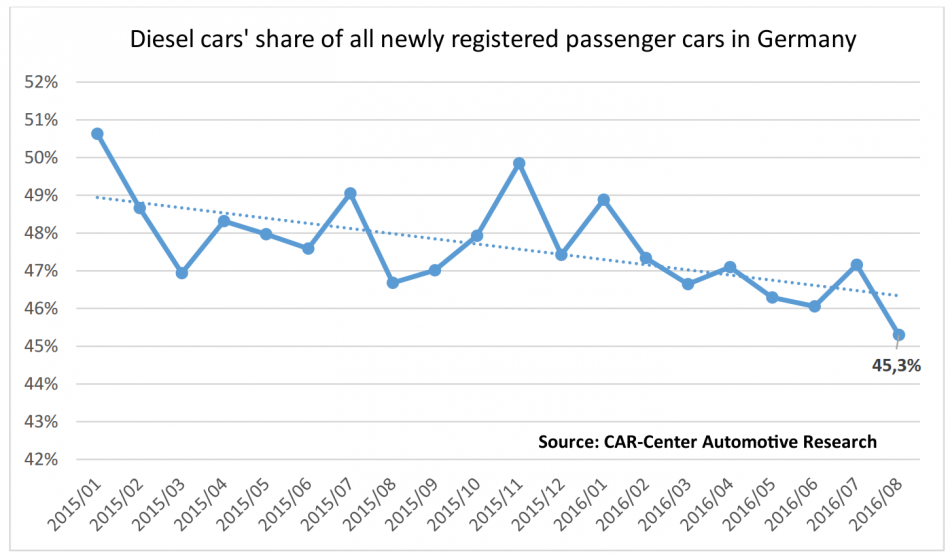 “Race to the permit”

Small wind power projects are hurrying to receive all necessary permissions to build their wind parks before the switch to an auction-based system for the state support for wind power facilities, writes Sebastian Latzel in Rheinische Post. The new system will come in at the beginning of 2017. Local projects will then be at a disadvantage compared to large investors, as the tender process involves high planning and application costs, the article says.

For background read the CLEW dossier on the reform of the Renewable Energy Act.

“The big CO₂ illusion of the federal government”

The targets of the Paris Climate Agreement can only be reached with the help of the Carbon Capture and Storage (CCS) technology, writes Daniel Wetzel in Die Welt. The 1.5° target was “ambitious to such an extent that it cannot be attained without huge underground CO₂ repositories, or risky geo engineering”, writes Wetzel. He adds that the federal government would have to overcome the public opposition to CCS.

“Opposition at the electricity frontier”

German grid operator 50Hertz is installing phase shifters to stop excess electricity from spilling over into neighbouring countries like Poland, writes Andreas Mihm in Frankfurter Allgemeine Zeitung. Electricity current normally takes the path of least resistance, but if the direct route is congested it will take a detour, sometimes through neighbouring countries. These loop flows have caused diplomatic controversies in the past, writes Mihm. The phase shifters – some of which have already been installed near the Polish-German border – can raise electrical resistance to divert power elsewhere.

The Association of Energy Market Innovators (BNE) and the renewable power provider LichtBlick welcome plans by the Federal Network Agency (BNetzA) to lower grid fees by decreasing the return on equity operators invest in Germany’s grid infrastructure, writes Jürgen Flauger in Handelsblatt. “The Energiewende must no longer be misused as the justification for sensational profits in this monopoly area. For energy customers, decreasing interest rates finally means relief in the billions of euros,” BNE managing director Robert Busch said in a press release, presenting a study by Leuphana University of Lüneburg. The Federal Network Agency regulates interest rates on operators’ investments in grid infrastructure. Last week, grid operators protested against the plans by BNetzA president Jochen Homann.

Read the press release by BNE and LichtBlick in German here.

Find the study commissioned by BNE and LichtBlick in German here.

Find background in the CLEW dossier The energy transition and Germany’s power grid.

Several German bicycle associations are demanding a buyer’s premium for new electric bicycles, akin to the premium the federal government introduced for e-cars earlier this year, writes Philipp Vetter in Die Welt. Critics argue that such support does not make sense: “For many, the e-bike is an alternative to the normal bicycle. This switch increases the environmental impact, instead of lowering it,” Clemens Fuest, president of the Institute for Economic Research (Ifo), told Die Welt.

“Germany’s Energiewende: a renewable revolution on the ropes”

With the reform of the Renewable Energy Act (EEG), “Germany’s once vaunted renewable energy strategy looks to be running out of steam,” writes Nnamdi Anyadike for the global energy industry website power-technology.com. "Despite its success in creating a large, guaranteed market for renewable power - and being the legislative role model for several other countries - the German Government has now decided to scrap the FIT [feed-in tariff] system of administered prices for wind and solar power,” writes Anyadike.