Env min Hendricks: "Nothing less than transforming our society" 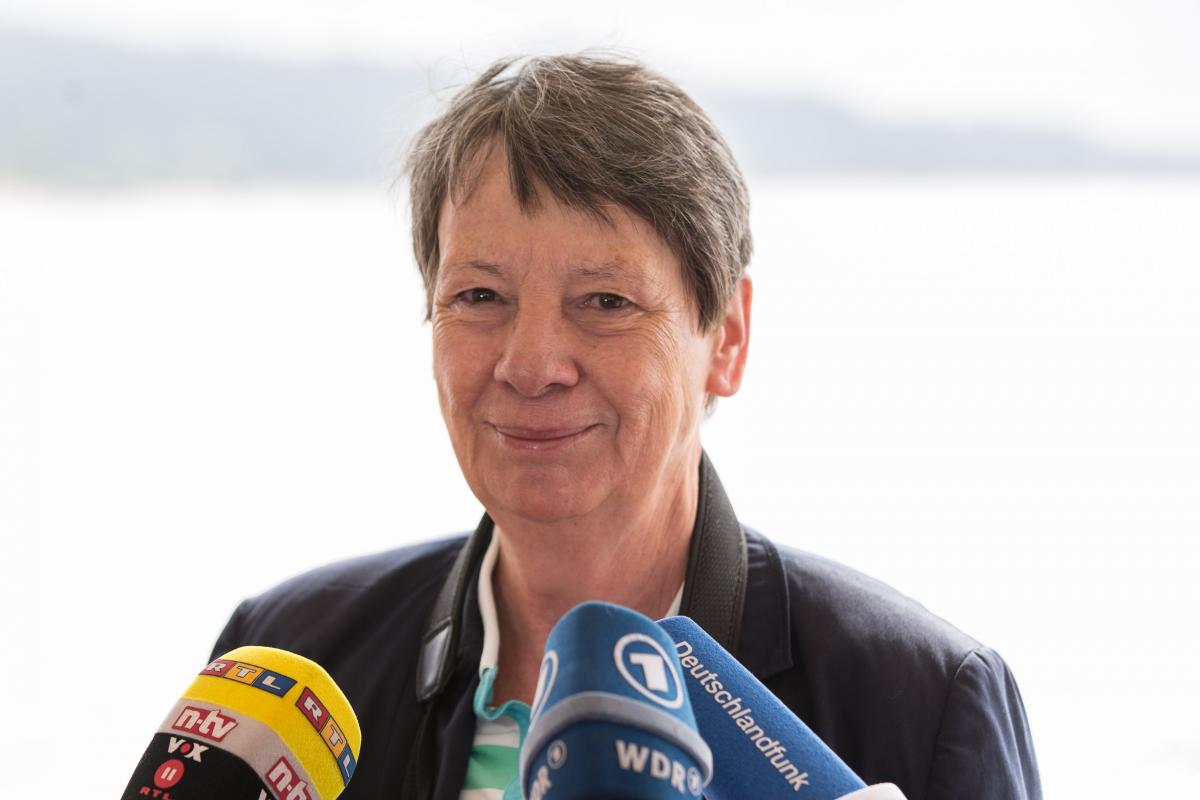 Barbara Hendricks has been heading Germany's environment ministry since 2013. Source:BMUB
Environment minister Barbara Hendricks has been at the helm of Germany's climate protection efforts for the past four years. During her tenure, the country has contributed substantially to brokering the Paris Agreement and put forth its first national climate action plan, she told the Clean Energy Wire during the ministry's summer tour at the end of July. However, the Social Democrat (SPD) says Germany's energy transition barely has started to engage all relevant sectors - and will fundamentally transform society.

CLEW: Ms. Hendricks, your four-year term as Germany’s environment minister is approaching its end. What do you consider your greatest achievements during this time in climate policy, both internationally and at home?

Hendricks: In international climate policy, we have successfully given a lot of impetus for reaching the Paris Climate Agreement. In the follow-up to Paris, at the COP in Marrakesh, we managed to get the so-called Partnership on nationally determined contributions (NDCs) off the ground together with Morocco. This project is running quite well, and a couple of industrialised countries have joined ranks with us. Together, we seek to assist countries of the global south to implement their own NDCs. This is a very important intermediate result, and I think we’ve made a lot of progress on it.
Also, we are going to prepare the upcoming COP. Germany is the technical host, and the presidency is shared with Fiji, as you know. At the climate conference in Bonn, we want to highlight the vulnerable role of island nations to the world, and I think we’re well on our way to preparing a good COP.
As far as national climate policy is concerned, I must emphasise that Germany as the first country in the world came up with a climate action plan, back in November 2016 at the COP in Morocco [See the CLEW factsheet]. The plan clearly outlines our 2050 goals, and says what we will have to do by 2030 to achieve them. It is a clear decision to organise life and work in Germany in a practically greenhouse gas neutral way by 2050.

Is there anything that you regret or would have liked to do better during your term?

Of course there is. You always have to deal with diverging interests that are weighed differently by different parts of the government. As environment minister, you have more serious and far-reaching ambitions in climate protection than, for example, the transport ministry.
However, I’m satisfied that the entire government has agreed on setting emissions reduction aims for 2030 in all sectors, including industry, agriculture, and transport. This is binding on all other parts of the government and for all sectors - for the first time ever, which is a great success. But this also means that we can’t put the entire burden on the energy industry. The other sectors need be held accountable as well. So far, in agriculture and transport, sadly, almost nothing has happened to date [See this CLEW article on Germany's rising emissions].

Climate protection has been a stated aim of both governing parties since the signing of their coalition agreement in 2013. Why did it take until late 2016 to agree on a climate action plan?

We wanted our Climate Action Plan to be developed in the light of the Paris Agreement. As the Paris Agreement turned out to be far more ambitious than many people expected, this approach was actually quite helpful in our negotiations with the other ministries. But nevertheless, we still had to surmount some reservations.

Do you think these frictions could resurface when it comes to implementation?

Yes, they will, without a doubt. We talk about nothing less than transforming our society and, evidently, this is going to be a big challenge.

Which sectors do you think will be especially affected by the plan, and which will be reluctant to change?

Let’s look at the energy sector again: what holds Germany back from at least devising a plan for halting coal-fired power production?

Our climate action plan does say that we need to come up with a plan for – or chart a path towards – phasing out coal [See the CLEW factsheet]. It doesn’t come as a surprise that this will still take some time, but we have to describe how we intend to do it. That’s what you do if you have a distant goal. But the reason why this hasn’t happened yet is that we still need a debate within our society on how that goal can be reached.
This debate must include everyone: workers, local businesses, and others involved in regions where coal mining plays a key role, such as in Lusatia, so that they can adapt appropriately. And, of course, energy security is a factor as well. We’re exiting nuclear energy by 2022, and we must ensure that this works out too [See the CLEW dossier].
It is clear that there will be no coal-fired power production in 2050, our target year for climate neutrality. Today, I can’t say how much in advance we will reach that point, but the sooner we start to work out the necessary steps the better.

What would these steps entail?

Well, first we must provide planning security for everyone involved: for investors, companies, and workers. Second, we have to build up alternative energy sources, both to achieve security of supply and to employ those people who formerly worked in the coal industry. We can’t just make a tabula rasa and leave a barren land behind, that’s no proper transformation.
Transformation has to be informed by a public debate, and must seek to leave nobody behind. You know, we have to be careful not to make climate protection an elite project. We still have a very high degree of public support for this project in Germany [See the CLEW factsheet], and we can’t let people think that ‘they don’t care about me’. The commission for structural change that starts its work next year is supposed to advance this debate.

So the first steps towards a coal exit are being taken already?

We’re making gradual progress, some of our lignite plants are already designated to be put into a capacity reserve. But we’ve decided against announcing when exactly the last plant will go off the grid. Instead, we want to outline how it can be done. That’s more important than saying, for instance, that we’ll be out by 2030, like the Green Party does [See the CLEW factsheet]. They don’t explain how they want to get there.

Turning to another subject: the upcoming diesel summit is expected to make Germany’s carmakers abide by environmental standards, and help them regain their customers’ trust. Do you think these goals are feasible?

The summit can help put our carmakers back on their track [See the CLEW article]. A first step will be to update the vehicles’ software, which ultimately will lead to improved air quality. But this is a first step only. It must be followed by clear guidelines how cars that already are on the road can be retrofitted beyond software updates, by mechanical changes. For this, we need clear commitments by the companies on how they intend to do that.
And it must be made clear that the customers can’t be the ones footing the bill. This is important for the industry to regain its reputation [See CLEW's dieselgate timeline]. And I think we as a government must improve and build up our state control institutions, and must help reduce air pollution in cities by electrifying our public transport fleet. The government will have to assume its responsibility here.

Is the government ready to exert pressure on the carmakers?

Yes, we will for sure come up with tighter requirements.

What can the government do to reduce emissions in the transport sector without keeping it dependent on the car companies’ goodwill?

We’ll definitely have to improve our public transportation schemes. In the cities, we have to step up connection intervals, and the settlements in the countryside need to become better connected to the cities. This is a task that primarily concerns Germany’s federal states. It would not only improve our climate efforts, but could also help us reduce the development imbalances between cities and the countryside. But this task cannot be solved in two or three years only.