Climate & CO2 Cars
Following intense lobbying by German carmakers, the EU has proposed car emission targets that will be insufficient to meet the country’s climate targets in the transport sector, according to environmental organisations. Critics said the carmakers are putting their own future at risk by pushing for less ambitious emission targets.

The EU proposal on Wednesday called for a reduction of 30 percent in average car fleet CO2 emissions by 2030 compared to 2021, with an interim goal of minus 15 percent by 2025. It did not include binding e-car quotas, which had been under discussion.

Climate expert Viviane Raddatz from environmental organisation WWF Germany said the new targets were not strict enough to reach the government target of reducing emissions in the transport sector by 40 to 42 percent by 2030.

“The new EU limits – which are the central tool for climate protection in the transport sector – cannot deliver this target,” Raddatz added.

Germany has made significant progress in increasing renewables’ share in the national power supply as part of its shift to a low-carbon future, dubbed the Energiewende, but there has been no progress in cutting emissions in the transport sector of the world’s fourth largest economy. 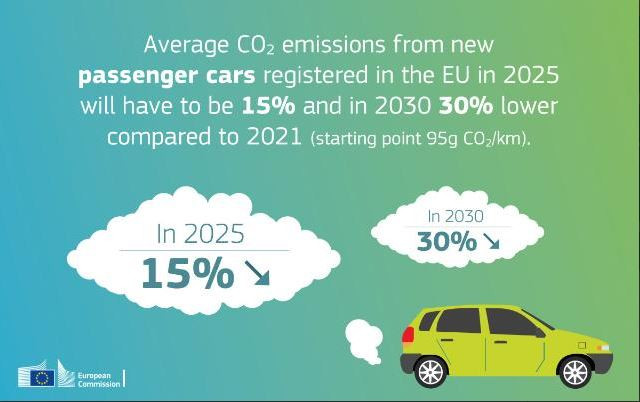 Christian Hochfeld, head of transport think tank Agora Verkehrswende*, said Germany would have to introduce further measures on a national level to reduce emissions in the transport sector.

“If these proposals become law next year, we won’t be able to reach the desired emissions reductions in Germany’s transport sector,” Hochfeld told the Clean Energy Wire at the COP23 climate conference in Bonn. “In that case, we would have to think about additional national measures much more than previously anticipated, such as taxes and levies, to reach our 2030 climate targets.”

The EU proposals coincide with negotiations to form a new government in Germany as well as with the COP23 climate summit. The Green Party leadership said this week that it would relinquish its prominent election campaign demand to phase out internal combustion engines by 2030 in newly registered cars for the sake of moving the stagnant coalition talks forward.

German car industry association VDA said in a statement that the emission targets were hard to meet and would put carmakers at a disadvantage in global markets.

“From today’s perspective, it is more than questionable whether the proposed CO2 targets are achievable. That will depend largely on how fast customers will accept alternative engines in the coming years and how fast public infrastructure is built.”

A concerted lobbying effort by German carmakers was crucial in watering down the EU targets, according to media reports and clean transport lobby organisation Transport & Environment.

The auto industry wields large influence in Germany because it is a true giant of the economy: Its 1,300 companies employ more than 800,000 people, according to official statistics [For further details, read the CLEW dossier BMW, Daimler, and VW vow to fight in green transport revolution.]

German foreign minister Sigmar Gabriel had told EU commission president Jean-Claude Juncker that he is against any toughening of car emissions targets by 2025, warning that stricter rules would cost jobs and growth, according to media reports.

But Peter Mock, European managing director at the International Council on Clean Transportation (ICCT), told German media that preventing an e-car quota was an “own goal for the car industry. The Chinese are leaving us behind in e-mobility,” Mock said.

In a first reaction to the new EU proposals, Mock told the Clean Energy Wire: “From a technical perspective, faster progress is definitely possible. Our studies show that a more ambitious CO2 target can contribute to a rising share of electrified vehicles, and that it would even lower carmakers’ costs of achieving the target in comparison to a scenario with more combustion engines.”

Hochfeld also said lobbying for weaker emission limits was not in the long-term interests of the German car industry because other countries like China were moving ahead much faster.

“Firstly, low emission vehicles and their share in the market will be crucial for their long-term competitiveness. Secondly, other national measures will have to make driving a car in Germany much less attractive if the new limits become reality,” Hochfeld said. “China is the world’s largest car market and it will heavily impact what’s happening here. It could turn into a disadvantage for the German and European car industry if the targets are not ambitious enough.”

“The weak CO2 limits extend the expiry date for the dirty diesel and secure short-term profits. In the medium term, European carmakers fall behind in technology. China and the US are already the driving forces in e-mobility.”

* Like the Clean Energy Wire, Agora Verkehrswende is funded by the Stiftung Mercator and the European Climate Foundation.