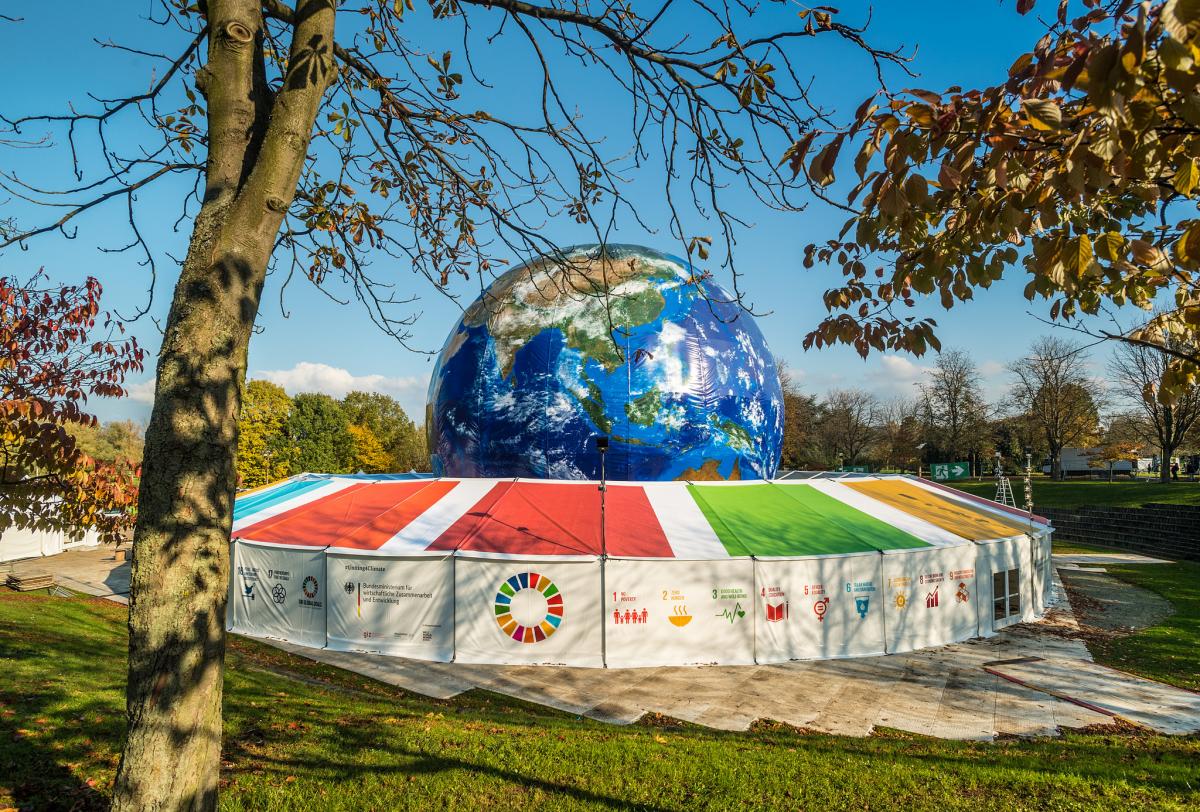 At 24 metres, the German government's Climate Planet is the world's largest model of the earth. Inside, visitors at this year's UN climate conference COP23 in Bonn find out more about the development of the climate and watch a documentary on the evolution of the earth. Photo: © BMUB / Dominik Ketz.
Talks in Bonn as technical as expected but also “unexcited, friendly and positive”, says German negotiator / Developing countries call for voluntary reporting / US should remain part of COPs / German taxpayers are financing the climate crisis - report / French and German businesses want global CO2 price / Making the COP climate-friendly

Negotiations at the 23rd UN climate conference in Bonn continued to be “unexcited, friendly and positive” on day two, German state secretary Jochen Flasbarth told journalists at a morning press briefing. “These are technical negotiations of great political significance.” Talks on the implementation guidelines of the Paris Climate Agreement had started on Tuesday and turned out to be “as extensive as expected”. One point of contention in the talks is the treatment of developed and developing countries when it comes to how to report climate progress in the future. The Paris Agreement foresaw an equal treatment of all countries, said Flasbarth, but the demand for voluntary reporting by developing countries has already come up again. The good news was that this happened in a “very constructive atmosphere”, said Flasbarth.

German negotiators are not in favour of a petition by African campaigners to eject the US delegation from the climate talks in Bonn. In light of President Donald Trump’s announcement to pull his country out of the Paris Agreement, the Pan African Climate Justice Alliance argued the country had no right to be involved in negotiations on how to implement the deal, Climate Home reported on 7 November.

But the German delegation wants to exercise caution with regard to the US, which is still party to the agreement. “They can formally leave in three years at the earliest, so it’s their right to take part in the negotiations,” Germany’s chief UNFCCC negotiator Karsten Sach told the Clean Energy Wire. He added that “it is in our interest to have the US on board, as they are a big economy and a large country. It is in our interest, if we can push forward the transformation also via their integration [in the Paris Agreement negotiations],” said Sach.

“The United States are part of the negotiation groups, but there is absolutely nothing extraordinary to tell you,” state secretary Flasbarth told journalists about the US delegation’s current attitude at the talks. US representatives took part as usual, but acted more restrained than at previous COPs.

“One day, we will hear the sentence, ‘Friends, we are back again,’ from the US,” said Flasbarth, and added that it was better not to set up unnecessary hurdles now. At the same time, the German delegation expected that the administration would be true to its announcement and leave the Paris Agreement, he said.

Speaking at an event about partnerships with Small Island Develpment States (SIDS), Flasbarth lauded the ambitious climate action of these states. “Your NDCs are really heroic. Given your situation, it cannot be taken for granted that in your NDCs [nationally determined contributions] you address not only adaptation – which is in a way logic – but also mitigation in a very ambitious way.”

Germany should be among the wealthier countries leading the way in shutting down early and quickly its coal mines to help reach global climate goals, says a new report by NGO Oil Change International and 350.org, presented at the COP today.

To be able to “credibly claim climate leadership in the global context”, Germany should close existing lignite mines within 10 years, support a credible and just transition for workers and residents in the lignite regions, ban new oil and gas development, end public finance for fossil fuels by no later than 2020 and scale up international climate finance.

“German taxpayers are financing the climate crisis because their government continues to provide handouts for fossil fuel production abroad,” said report co-author Alex Doukas of Oil Change International. “As a champion of clean and renewable energy at home, it is deeply hypocritical that Germany is still pouring billions into dirty energy beyond its borders.”

The German coal exit is one of the most heatedly discussed topics in the current coalition talks that aim to form a new federal government. [Also check out the article Greens ready to make climate policy concessions in coalition talks]

Representatives of small island states most affected by climate change effects had a direct message for the COP’s technical host. “Germany’s coal mining exports destruction to the Pacific and the world,” said George Nacewa, “climate warrior” from the Fiji Islands. Climate change posed a direct threat to the islands and its inhabitants.

Governments should refrain from “national solo efforts regarding energy sources and CO2 prices”, the Federation of German Industry (BDI) and its French counterpart, Mouvement des Entreprises de France (MEDEF) said today. Businesses in France and Germany believed that market mechanisms such as an international CO2 price were the best method to keep global warming from exceeding 2°C. As a first step it would make sense to introduce such a price in the G20 states, they said.

"We want to have the most climate-friendly COP to date"

As little waste and food waste as possible, few paper printouts, organic and regional food and offset travel emissions are supposed to make Bonn the most climate-friendly UN climate conference to date, said state secretary Flasbarth at the press conference.

The German Environment Ministry (BMUB) and the UN Climate Change Secretariat are striving to achieve certification under the particularly stringent Eco Management and Audit Scheme (EMAS). Under EMAS, a voluntary instrument originally developed by the EU to support businesses in improving their environmental performance, all environmental impacts are analysed in order to minimise adverse effects where possible, said BMUB in a press release.

There were very emotional reactions on the topic of emissions compensation, said UNFCCC spokesperson Nick Nuttall. “But you have to get realistic about this. We are living in a world where you cannot have a society yet where everything is super low carbon.” People still wanted to physically get together at conferences like the COP and until that changed, one would continue to have to worry about compensation.