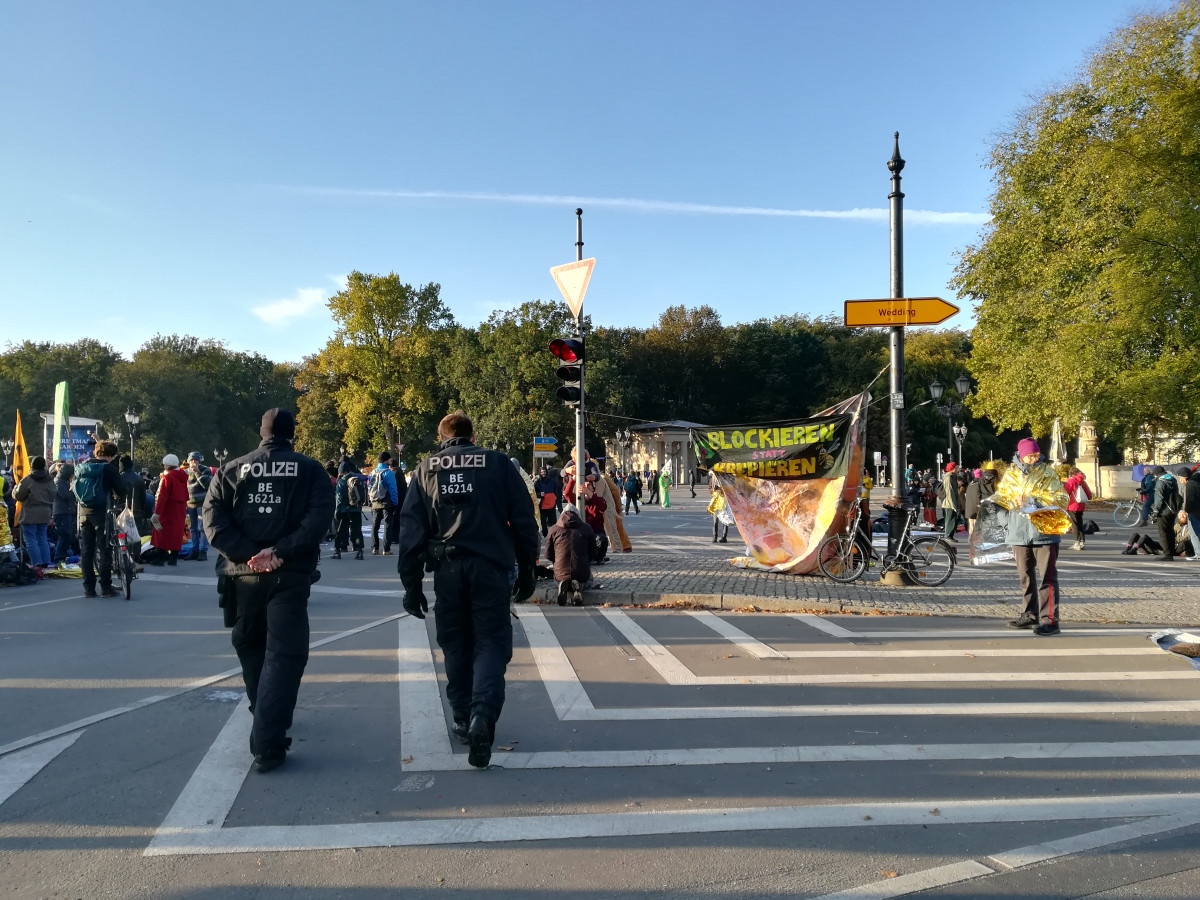 Climate activists from Extinction Rebellion have begun two weeks of blockades and acts of civil disobedience by occupying two main traffic intersections in Berlin, demanding that Germany's government "tells the truth" about the threat posed by climate change. Berlin authorities have said they will tolerate protests as long these stay peaceful while a federal government representative said "dangerous" interventions in traffic are not acceptable. [Update adds developments on 8 October, quotes by activist Judith Gröpper]

Climate activist movement Extinction Rebellion has blocked a main traffic junction near the government district of Berlin and set up a protest camp in front of the seat of the German parliament in order to "bring attention to the threat of the collapsing climate and destruction of ecosystems". Another blockade at Potsdamer Platz, another central intersection, started at about 12pm. The movement had announced two weeks of protests with plans to occupy main roads and "paralyse" the German capital and other major cities around the world, starting on 7 October.

"It appears that demonstrations won't make politicians listen to the science so we are going one step further and saying, we want to peacefully commit civil acts of disobedience, block roads, and finally put pressure on the political decision-makers," climate activist Timm von Schmude told Clean Energy Wire at the Großer Stern traffic intersection, which he and other protesters had occupied since the early morning.

More than 3,000 people were estimated to have taken part in demonstrations by the end of Monday, October 7. Overnight, Berlin's police had attempted to remove the blockade on Potsdamer Platz but eventually decided to retreat. Around 6am on Tuesday, members of the police again started clearing Potsdamer Platz while Großer Stern remained occupied by activists. At this point in time, no arrests had been made and the atmosphere at both blockades was reported to be peaceful, characterised by friendly interaction between activists and police. "I have never experienced a protest like that before in Berlin. Police were smiled at, rioters sorted out. Over 3,000 people: no arrest. The organisation is professional and remarkable – despite many protesting for the first time," commented Julius Betschka from Der Tagesspiegel, on Twitter. 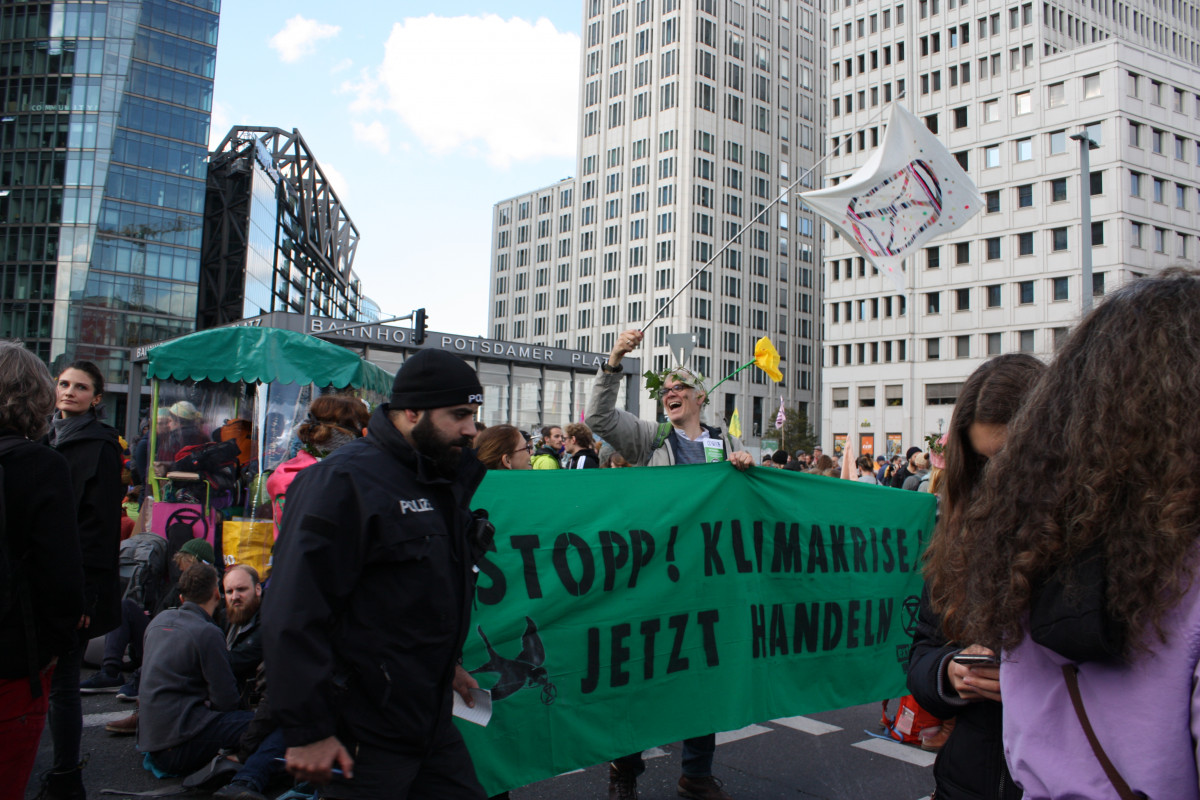 Our second demonstration site at Potsdamer Platz is now being set up.

Extinction Rebellion demands that the German government "tells the truth" about "the ecological crisis" and declares a climate emergency. It also calls on the government to "act now" to reach net-zero greenhouse gas emissions by 2025 and set up a “Citizens’ Assembly” of randomly selected people supported by experts to make binding climate action decisions, alluding to the Irish citizens' assembly as a role model. Germany’s official target so far has been to reduce emissions by 80-95 percent by 2050. The government is currently in the process of passing a climate protection law and a climate package, which many activists say is not ambitious enough.

Berlin's senator of the interior Andreas Geisel said the blockades would be observed and allowed to continue "for a while" as they could be regarded as spontaneous demonstrations, permissible under the right to demonstrate, wrote Der Tagesspiegel. If violence was used or critical infrastructure such as the airport became affected, the police would have to intervene. Head of the Federal Chancellery Helge Braun, from Merkel's CDU, criticised the blockades, saying "we all share the concern about climate protection and the climate targets, but if you announce dangerous interventions in traffic and things like that – that's of course not okay”.

Judith Gröpper, activist at Potsdamer Platz, said she had been asked many times about Extinction Rebellion's approach and whether it might turn people against the climate action movement. "It remains to be seen," she answered. "But our goal is not only to block roads and disturb the city. The goal is to reach as many people as possible. I simply hope that these images, when they go on television, through the world, will perhaps achieve a peaceful mobilisation of people." Gröpper was disappointed with the German government "lagging behind the civilian population" and called its newly agreed on climate package "downright ridiculous".

While protests were ongoing in Berlin, activists from Extinction Rebellion also demonstrated in other cities across the globe, including Sydney, Melbourne, Amsterdam and London. In London and Amsterdam, a number of activists have been arrested. Extinction Rebellion originates in the United Kingdom, where activists blocked several London bridges in November 2018.