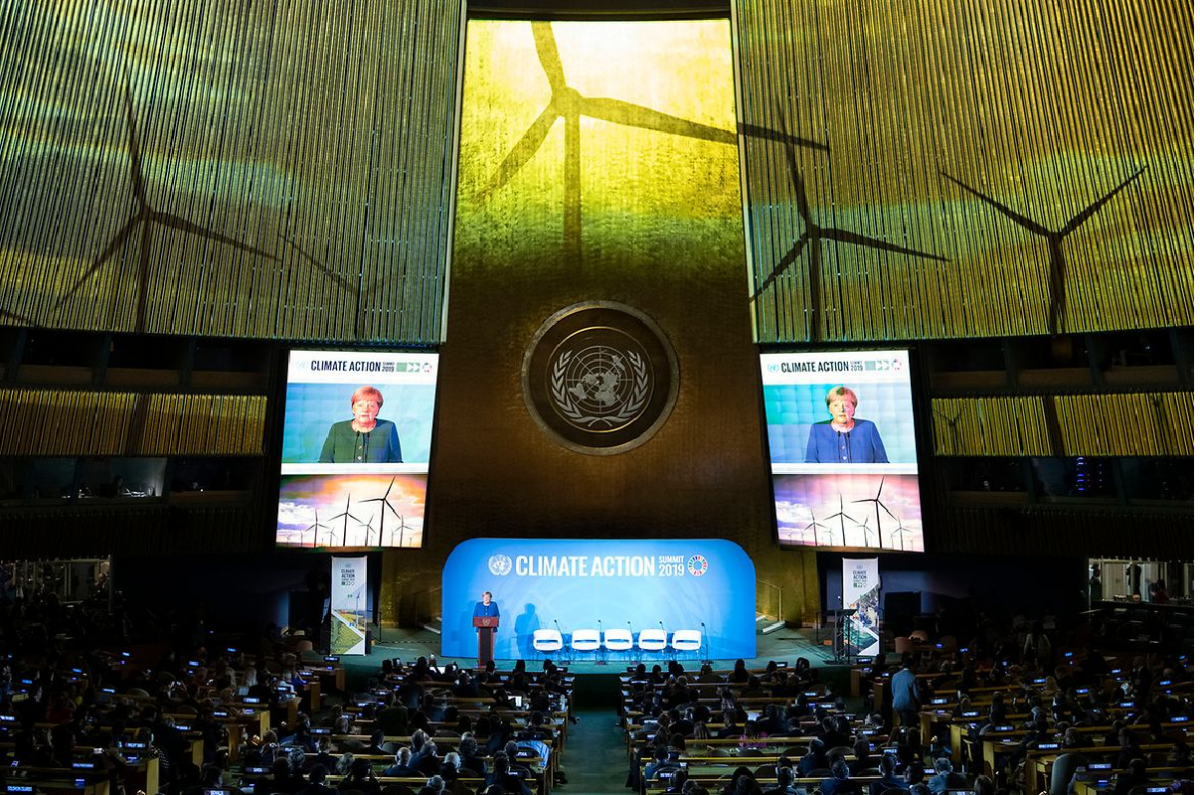 The German government has presented a draft of Germany’s first-ever major Climate Action Law, which assigns flexible annual greenhouse gas budgets to economic sectors for the years 2020-2030, but does not make long-term climate targets legally binding. The law is part of the climate package Chancellor Angela Merkel’s grand coalition decided on 20 September, alongside a programme of measures and a set of legislative reforms. Analysts and NGOs claim that the law is weaker than an earlier draft and that a lack of sanctions if targets are missed means the law will fail to ensure Germany lives up to its 2030 commitments. Stakeholders have until Tuesday (8 October) to comment on the draft, and the federal cabinet is set to decide it one day later. [UPDATE adds chancellor Merkel's reaction to criticsm]

“It cannot be said that there is a weakening of essential points,” the environment ministry said in a message on Twitter, because the “crucial core of the project in terms of climate action” - the annual sector targets – continue to be part of the law.

Chancellor Angela Merkel also weighed in on the criticism, reported Reuters. Speaking at the launch of a centre for education on climate in the southern German town of Sinsheim, Merkel said: "The question of monitoring is very decisive in the climate protection plan. I want to say clearly that this monitoring mechanism will be anchored in the plan in a crystal clear way, otherwise I would not let it be approved. This is due to happen on Wednesday."

The Climate Action Law is part of the climate package for which Merkel’s grand coalition decided key points on 20 September. Together with a programme of measures in all sectors (Climate Action Programme 2030), a CO2 price in transport and buildings, and several legislative reforms, it is meant to ensure Germany reaches its 2030 targets.

After a prolonged boom in renewable energy, Germany's planned transition to a low-carbon, nuclear-free economy – the famed Energiewende – has slowed in recent years. The country is set to miss key national energy transition targets in 2020 – among them reducing greenhouse gas emissions by 40 percent – and CDU/CSU and SPD have now put all focus on reaching the 2030 goals. Merkel set up the so-called climate cabinet – a group of ministers with responsibilities in key climate policy fields – earlier this year to decide on necessary legislation.

As in an earlier draft of the climate law, the government is authorised to change sectoral emissions budgets by executive decree, allowing for some flexibility as to what each sector must contribute to the overall goals. 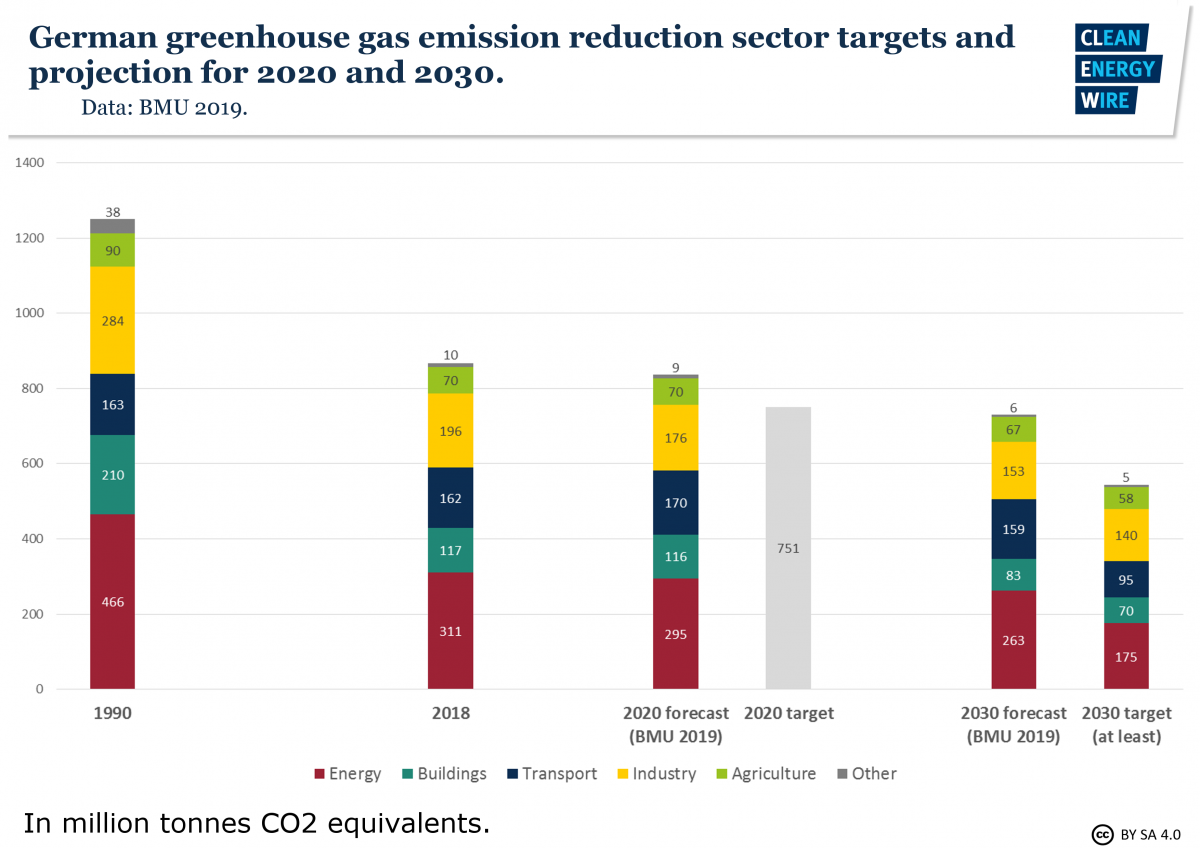 NGOs, however, renewed their criticism that the plan does not provide for control and sanctioning mechanisms for sectors that are off track. Without these, the government could not reliably meet its own 2030 emissions reduction target, said Sascha Müller-Kraenner of NGO Environmental Action Germany (DUH).

The draft states that the responsible ministries have to present an emergency programme, should their sector fail its target, which the government would then decide.

While German government struggles with its final draft of a national climate law (#Klimaschutzgesetz) the real battles are fought in EU #climate policy.
Obligations stemming from EU targets/legislation affect GER much more than non-binding national targetshttps://t.co/kCK8A3gjlt

Compared to the February version, the changed draft has weakened the tasks and rights of a planned council of independent experts, now called “Expert Commission for Climate Questions”. The group would not be able to make recommendations to individual ministries how emissions in sectors under their responsibility could be cut.

In an earlier draft, Environment Minister Schulze had called for an ambitious greenhouse gas reduction goal of “at least 95 percent” and greenhouse gas neutrality by the year 2050. These paragraphs have been omitted from the current text. However, the provision on the law's purpose states that it rests upon the Paris Climate Agreement and the commitment Germany made at the UN climate action summit in New York on 23 September 2019 to “pursue” the long term target of greenhouse gas neutrality by 2050.

DUH’s Müller-Kraenner criticised that not including binding targets for 2040 and 2050 means that companies in Germany are "left out in the rain" as they cannot adapt their investments in new low-carbon technology to a reliable regulatory framework. The changes would turn the government's climate plan into a "toothless tiger” Müller-Kraenner said, calling on the government to revise the draft again.

Germany’s current official national target is to reduce greenhouse gas emissions by 80-95 percent by 2050, compared to 1990 levels. Analyst Oliver Geden, from the German Institute for International and Security Affairs (SWP), said Germany would likely only announce a national net-zero target for 2050 after the European Union makes its decision.

Since the publication of this earlier draft in February 2019, the discussion among European Union member states to agree climate neutrality by 2050 has gathered speed. Germany’s government continuously resisted calls by European neighbours to sign on to such a pledge, but Merkel changed course earlier this year. The government’s climate package from 20 September states “Germany supports the goal of greenhouse gas neutrality in Europe by 2050”. However, three EU member states have yet to sign on to the pledge.

Depending on the future distribution of obligations under the Effort Sharing regulation and the EU Emissions Trading System (ETS), Germany might have to set a target that goes beyond reducing its own greenhouse gas emissions completely, e.g. by applying technologies to extract CO2 from the air, SWP’s Geden wrote in a message on Twitter.

Stakeholders are given time until Tuesday (8 October) to comment on the draft, and the federal cabinet is set to decide it one day later.