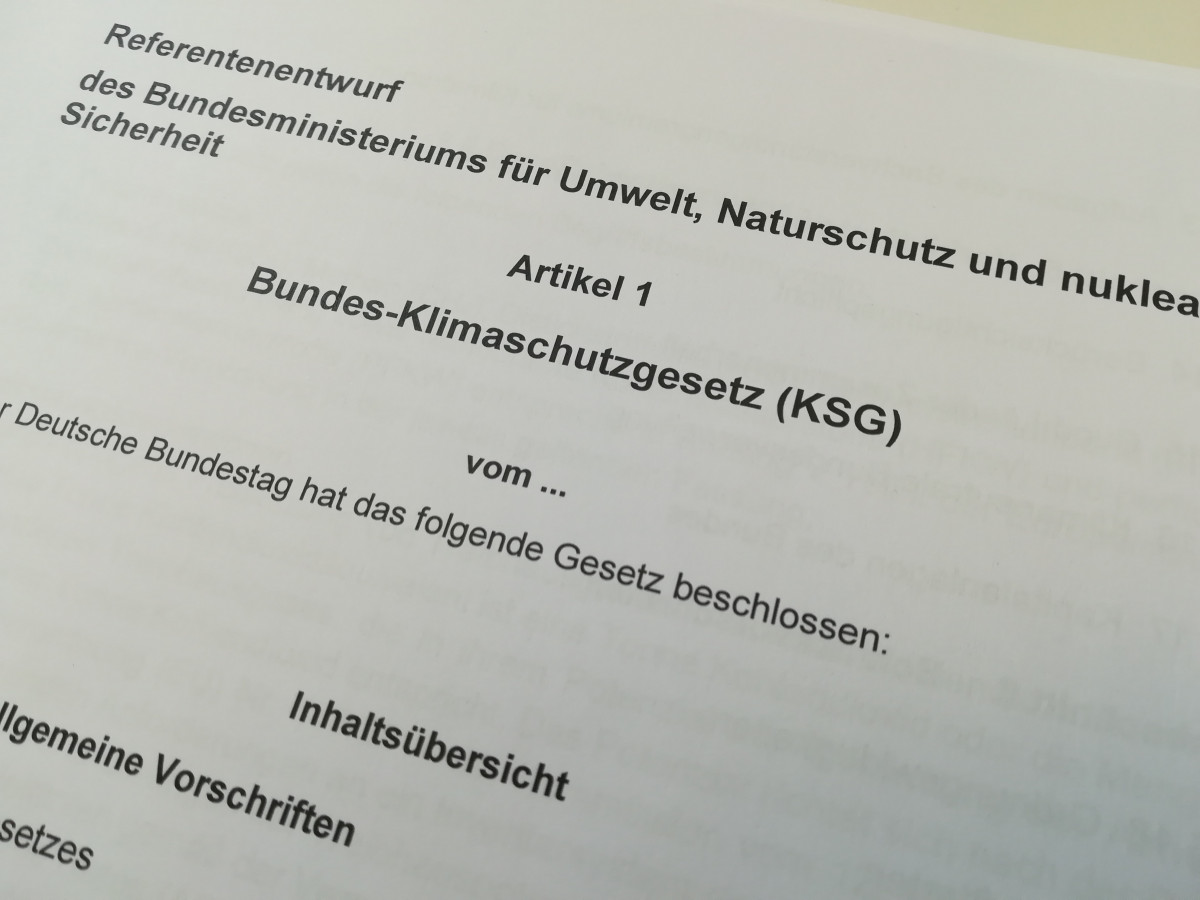 German environment minister Svenja Schulze is calling for an ambitious greenhouse gas reduction goal of “at least 95 percent” by the year 2050 compared to 1990, in a draft of the highly anticipated Climate Action Law, seen by Clean Energy Wire. The text also calls for greenhouse gas neutrality by mid-century by removing the equivalent of remaining emissions from the atmosphere. Analysts say it is uncertain whether the draft will become law in its current form, as the law-making process has only just begun and some members of Chancellor Angela Merkel's conservative CDU/CSU alliance have already criticised key elements. [Update adds details, reactions and analysis.]

Germany's environment ministry (BMU) is calling for a tightening of the country's 2050 climate targets in a draft of the highly anticipated Climate Action Law, seen by Clean Energy Wire. The proposal says Germany should cut greenhouse gas emissions by “at least 95 percent” by mid-century and calls for greenhouse gas neutrality by 2050. This means the equivalent of any remaining emissions would need to be absorbed and either stored or used. [Read the factsheet Germany's Climate Action Law begins to take shape for details on the draft]

The proposal for the 2050 target is likely to generate heated debate within the government coalition and in parliament. Currently, the country aims to cut greenhouse gas emissions by "80 to 95 percent" by 2050. But Chancellor Merkel said in 2017 Germany must decide on an exact target in the current legislative period. The difference between an 80-percent scenario and a 95-percent scenario is significant. In a 2018 study, the Federation of German Industries (BDI) has said fulfilling the upper end is only realistic if other industrialised countries make comparable efforts.

The draft, which Social Democratic (SPD) environment minister Svenja Schulze sent to the chancellery for early coordination, is in for a rough ride in the legislative process over the coming months, and the outcome is uncertain. Should the chancellery approve, it will be debated among relevant ministries, then sent to parliament. It has already drawn heavy criticism from parts of Merkel’s conservative CDU/CSU alliance and the business-friendly Free Democrats over the past days. However, it was welcomed by parliamentarians from governing coalition partner SPD, as well as the Greens and the Left Party.

German media has questioned whether Schulze is strong enough to follow through on the high demands of her first draft. She has in the past openly called for greater ambition, but then had to bow to guidelines from the chancellery. In December 2018, she abstained in a vote on CO₂ limits for trucks in the European Council, despite her wish to agree with a proposal on the floor.

“Under these circumstances it seems to me highly unlikely that the grand coalition proceeds with the new climate law,” political analyst Arne Jungjohann told Clean Energy Wire. Schulze’s decision to submit the draft without a general agreement with the coalition partner is “an indication for a tactical move. The SPD wants to demonstrate leadership and raise its profile on the issue,” he said.

Germany now faces many months of heated political debate over the planned new Climate Action Law. After months of coalition talks, Merkel's government promised in its 2018 treaty to ensure the country reached its 2030 greenhouse gas reduction targets by enshrining them in law by the end of 2019. Both coalition partners are under pressure after a series of losses in regional elections, and ahead of the European Parliament election in May and in three Eastern states in autumn. At the same time, the government needs to implement the recent proposal by its coal exit commission to put an end to mining the fossil fuel in Germany.

Still, the law could receive some tailwind against the backdrop of the “Fridays For Future” protests by tens of thousands of teenagers across Europe and in Germany, who skip school on Fridays to demand action on climate change – and by a German public that remains strongly in favour of the country’s transition to a low-carbon, nuclear-free economy.

Ministries to be financially responsible for reaching targets

Discussions of the Climate Action Law do not always refer to a single law, but rather a package of measures and legislation. The package is expected to consist of two main elements: a main framework climate action law, and a programme of measures to help ministries reach the targets for their respective sectors. The text seen by Clean Energy Wire is the first draft of the framework law.

Core elements of the draft include an independent seven-person expert body for climate issues, set up by the federal parliament to examine the effectiveness of climate action measures, and publish annual reports with recommendations. The text also stipulates that state institutions must take the law into account for all their decisions and planning, and that the federal administration aims to become climate-neutral by 2030. Additionally, federal institutions must explain how their capital investments take into account climate targets as well as resulting risks from climate change.

However, the major goal of the 65-page draft (including annexes) from the environment ministry is to enshrine into law Germany’s greenhouse gas reduction targets for the years 2020, 2030, 2040 and 2050. It also divvies up these targets between economic sectors (energy, buildings, transport, industry, agriculture, waste and other), as established in Germany’s Climate Action Plan 2050. 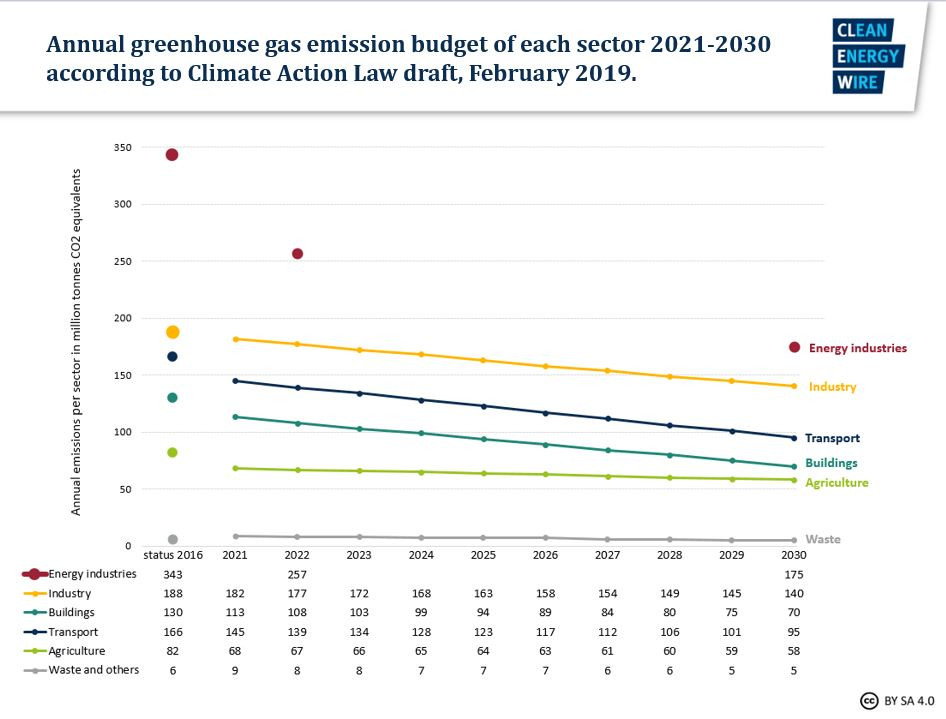 The sector targets will be broken up into annual emissions budgets, and the ministry most responsible for the economic sector is also responsible for ensuring they are reached. If targets are missed, Germany might have to buy emissions allocations from European neighbours, as stipulated in the EU effort-sharing regulation. The costs should be covered by the budgets of the responsible ministries, writes the environment ministry in the draft – a provision that has come under fire by conservative politicians.

Some politicians from Merkel’s conservative alliance have come out against a framework climate action law over the past days. “We don’t want a framework law which – in addition to bureaucracy, external supervision, ministry responsibility and planned economy – offers only things that do nothing for climate action,” Georg Nüßlein (CSU), deputy head of the CDU/CSU parliamentary group in the Bundestag, told German radio Deutschlandfunk.

The draft is an “empty shell”, said Anja Weisgerber (also CSU), climate action representative of the conservative CDU/CSU parliamentary group in a press statement. She criticised that the text “does not save a gram of CO₂, because it doesn’t contain concrete measures” for emissions reduction.

However, this is not the goal, writes the environment ministry in an explanation that accompanies the draft. It says that the framework climate action law is meant to enshrine the “goals and principles of climate policy. […] The law does not immediately save CO₂, but instead puts climate policy as a whole on a solid foundation and makes it binding.”

Weisgerber says the government should concentrate on introducing cost-efficient measures that lead to the highest possible CO₂ reduction for every euro invested. “We must not get entangled in disputes about sector targets, budgets and sanctions.”

SPD party head Andrea Nahles supported Schulze’s action. “It’s good that Svenja Schulze is abiding by the coalition agreement,” she said. “It would be even better if the [conservative CDU/CSU] alliance did so, too.”

The draft from the environment ministry is “worse than expected”, said Lukas Köhler from the market-liberal, business-friendly Free Democratic Party (FDP). “Instead of strengthening climate policy through expanding emissions trading, Svenja Schulze wants to carry the planned climate economy too far through national CO₂ budgets for the EU ETS sectors industry and energy,” he wrote on Twitter.

Other opposition politicians welcomed the text. “It’s a strong legislative draft,” said Lorenz Gösta Beutin, climate and energy policy spokesperson of the Left parliamentary group, in a message on Twitter. His counterpart from the Green group, Lisa Badum, promised “our full support, if Mrs Schulze means business.” Now, Angela Merkel – who has often been dubbed “climate chancellor” -- had to “make the law her own”, Badum told Süddeutsche Zeitung.

Merkel had earned herself the nickname “Climate Chancellor” during her first term in office between 2005 and 2009, when she put the topic firmly on the international agenda. However, many observers have questioned her commitment in recent years after her government failed to make significant progress on the reduction of greenhouse gas emissions, and postponed the country’s 2020 reduction target and dampened ambitions on a European level. Merkel has already stepped down as CDU party head and will soon leave the stage of world politics when her chancellorship is over. Her climate policy legacy is uncertain.

The draft stops short of proposing answers to how the climate can be saved “at reasonable costs from a political, economic and socially just point of view,” said industry association BDI in a statement. The organisation wants the government to propose how the “billion-euro investments for the future” can be guaranteed without endangering Germany’s role as a business location. “The draft law does not provide sufficient answers to these questions.”

The German Renewable Energy Federation (BEE) said the law would provide dependability for everyone involved and a positive dynamic for all sectors. “At least 95 percent less CO₂ by 2050 - a strong signal for a shift towards clean, renewable energy sources and greater efficiency,” said BEE president Simone Peter.