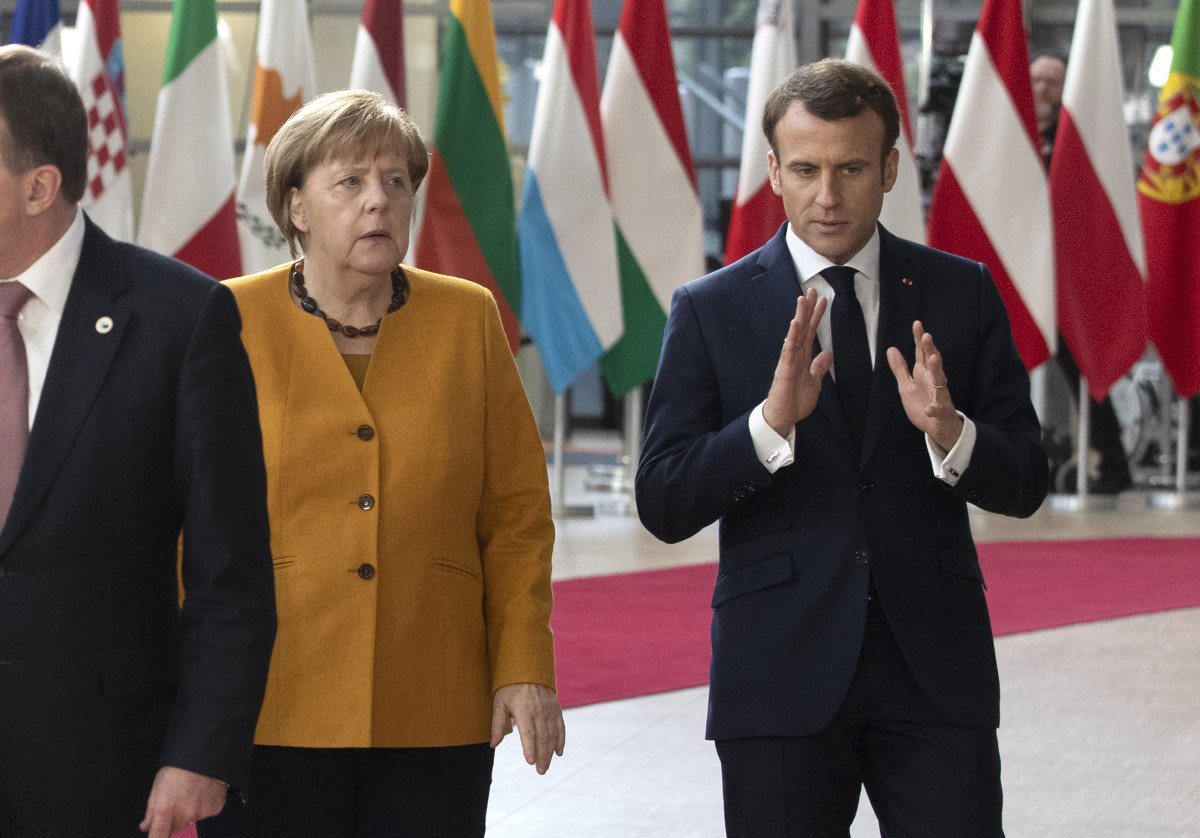 France is one of several countries pushing for climate neutrality in the EU by 2050; German Chancellor Angela Merkel (left) and French President Emmanuel Macron at the European Council summit in Brussels on 22 March. Source: European Union 2019.

European leaders did not call for climate neutrality by 2050 at today’s summit in Brussels, despite several countries including France suggesting it to be included. Germany is among a group of countries rejecting a tougher wording on emission goals, according to media reports, although the country's own draft Climate Action Law includes the same target.

The conclusions from a meeting of EU heads of state and government omit the call to strive for climate neutrality by as early as 2050. The body wasn't able to agree on changes to the wording of the document which had been proposed by several member states ahead of the meeting in Brussels.

Leaked documents, first reported by EurActiv and seen by Clean Energy Wire, show that some member states, including France and the Netherlands, tabled amendments to the Council’s draft conclusions for today’s meeting, calling for “climate neutrality by 2050 in line with the 1.5 degree objective of the Paris Agreement”.

However, a group of countries including Germany and Poland are resisting a 2050 deadline, Frédéric Simon reported for EurActiv. The group “opposes any time-bound commitment to the EU’s climate neutrality objective,” Simon writes.

A spokesperson for Germany's government declined to comment on the media report, adding that climate action was a “key issue” for the German government.

“2050 is not included in the final conclusions,” a Council spokesperson told Clean Energy Wire. “There was a discussion about this, and we are trying to reconcile the different positions and find common ground.”

The text now emphasises the importance of the EU submitting an ambitious long-term strategy by 2020 “striving for climate neutrality in line with the Paris Agreement.” In the 2015 Paris Climate Agreement the international community had agreed to achieve a balance of human-caused greenhouse gas emissions and removals by sinks “in the second half of this century”. Many EU governments are now calling for more ambition and want to pin down this date to 2050.

Speaking at a meeting of the economic council of the Christian Democratic Party (CDU), energy and economy minister Peter Altmaier said on Friday: “I’m against toughening up climate targets for 2050 as long as we don’t know whether we will achieve the current targets,” according to Energate News.

With the conclusions from today’s meeting, the European leaders were expected to provide guidance on the overall direction and political priorities, to enable the European Union to submit a long term strategy in line with the Paris Agreement by 2020. In November 2018, the European Commission had called for a climate neutral Europe by 2050 in its first draft for this strategy. The European Parliament has already said it supports the Commission’s push.

Now, the European called on the Council to intensify its work on a long-term climate strategy ahead of a further discussion in the European Council in June 2019.

The German climate cabinet’s objective is to ensure all ministries take effective measures to cut emissions, and that Germany’s Climate Action Law is passed this year.

A draft of the law released in February includes the target of reaching net-greenhouse gas neutrality by 2050 – almost exactly the wording the German government is said to have opposed in Brussels this week. The draft law also includes the goal of reducing greenhouse gas emissions by “at least 95 percent” (compared to 1990).

An environment ministry spokesperson said on Friday that the targets were now “under discussion”, referring to the legislative process, which the government aims to conclude by the end of the year.

The only amendment Germany had tabled to the “climate change” section of the European Council document is the inclusion of a new paragraph saying that “all Member States strive to take ambitious action to meet the non-ETS emission targets 2021-2030, supported by an effective EU framework, and asks the Commission to regularly report on progress and further need for action.”

While this does not include a call for more ambitious targets, it would actually put additional pressure on Germany itself, which is currently expected to overshoot its greenhouse gas budgets under the EU effort-sharing regulation. However, it was not included in the final text.

While presenting itself as progressive on climate action both at home and on the global stage, Germany has repeatedly blocked more ambitious climate action at the EU level. Merkel actively prevented tougher limits on car emissions on several occasions, and did not support raising the EU’s 2030 greenhouse gas reduction target from 40 to 45 percent.

The European Union should aim for climate neutrality by 2050, and Germany “should side with the ambitious states” of the union, the German Renewable Energy Federation (BEE) said in a press release. “How urgent it is to keep global warming at 1.5 degrees […] has been shown repeatedly by scientists,” BEE president Simone Peter said, calling for climate neutrality by 2050 to be included in the planned German Climate Action Law.