The number of electric cars on German roads increased significantly last year, while major markets like the U.S. and China recorded slower growth. That's according to a survey by the Center for Solar Energy and Hydrogen Research Baden-Württemberg (ZSW). "Germany bucked the international trend as the number of new registrations continued to rise," the researchers said, adding that registrations rose 61 percent last year compared to 24 percent in 2018. Germany is now third worldwide with 108,600 newly registered electric cars, overtaking Norway with 81,540 new e-car registrations. But in Norway, 57 percent of new registrations are electric, compared with 5 percent in China, 3 percent in Germany and 2 percent in the U.S, the survey found. China and the US remained the world's largest electric car markets, despite slight decreases to 1,204,000 registrations in China and 329,500 in the USA.

“Although the growth rate for newly registered electric vehicles is relatively high in Germany, the market continues to lag behind,” said ZSW's managing director Frithjof Staiß. “This development will have to pick up a lot more momentum to reach the German government’s goal of seven to ten million electric vehicles by 2030."

German carmakers continue to trail the competition in global e-car sales, the survey found. Tesla was the top manufacturer of electric cars, having delivered 361,000 e-cars in 2019. It’s followed by the Chinese carmakers BYD, Baic and Saic. BMW and VW are fifth and sixth in the global market with 115,000 and 93,000 registrations respectively, followed by Hyundai and Nissan.

The successful transformation of the car sector is seen as a crucial challenge for Germany, both to reach the country’s climate targets and to maintain its position as a technologic leader in the industry. 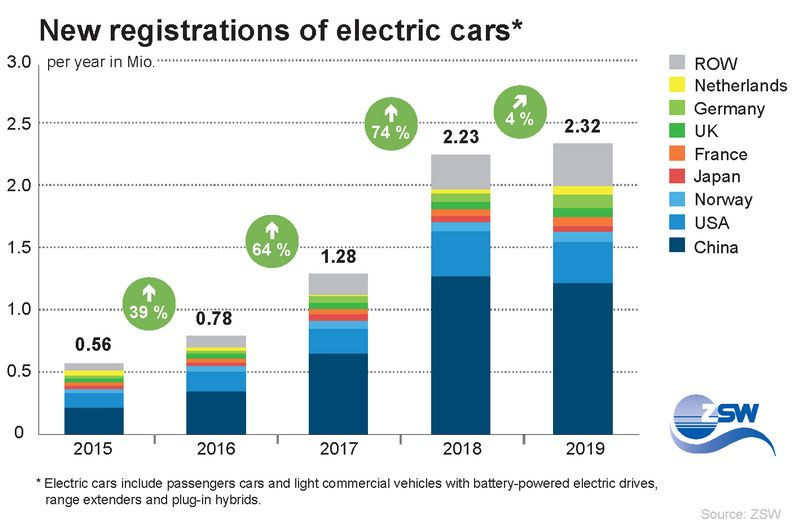