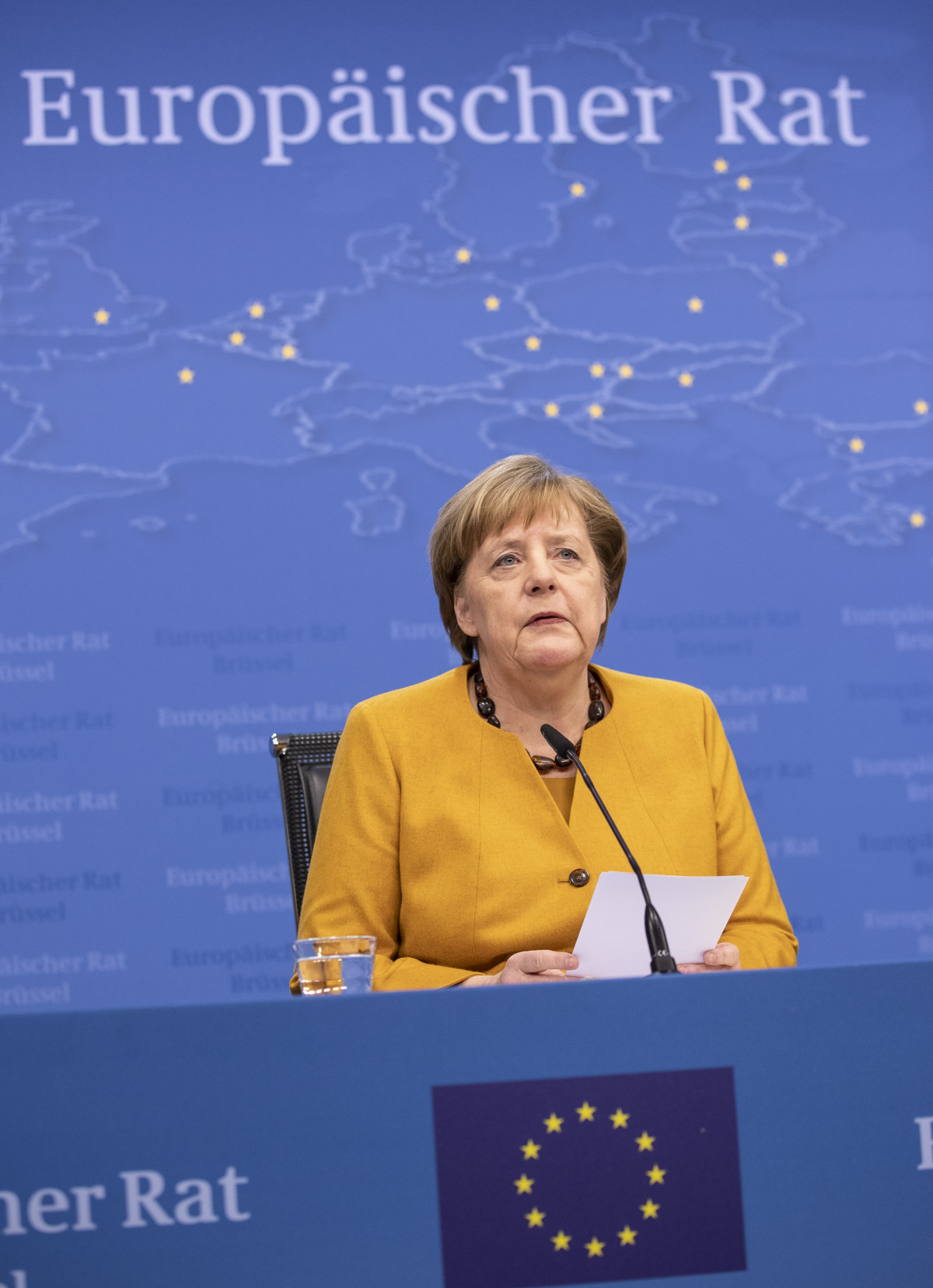 The German government has long resisted calls by European neighbours to sign on to a net-zero 2050 pledge. Photo: European Union 2019.

Germany will join a growing group of EU countries to support the pledge to aim for carbon neutrality by 2050, increasing the likelihood EU leaders will agree to the goal at a meeting this week (20-21 June), several media outlets report. Documents show that Germany has thrown its weight behind an EU-wide target to cut net carbon dioxide emissions to zero by mid-century, after having resisted such calls by several neighbouring countries, including France, for months. Angela Merkel’s spokesperson Steffen Seibert largely confirmed the media reports. [Update adds Seibert's statement.]

Germany looks set to back an EU-wide target to cut net greenhouse gas emissions to zero by 2050, according to leaked documents from the upcoming European Union leaders meeting this week (20-21 June).

An earlier draft summit statement had suggested there would be no agreement on the plan. But with Germany on board, a green light for the plan looks more plausible, writes Sam Morgan for EurActiv.

The leaked German government position for the summit’s draft conclusions, seen by Clean Energy Wire, states: “The European Council invites the Council and the Commission to advance work on the conditions, the incentives and the enabling framework to be put in place to support the fair transition to a climate-neutral EU by 2050.”

Angela Merkel’s spokesperson Steffen Seibert largely confirmed the media reports. “The Chancellor has made it clear that we want to have a discussion on how we in Germany - and this also applies to Europe - can be climate neutral by 2050," Seibert said at a regular government press conference. "In line with this, we were involved in the discussions in Brussels in the run-up to the European Council meeting. We expressed ourselves along these lines in regards to the long-term goal of greenhouse gas neutrality and demanded that this year, 2019, it be clarified how the path to greenhouse gas neutrality can be achieved by 2050. We therefore welcome the fact that the European Council is considering how we can achieve greenhouse gas neutrality by 2050.”

A lack of German support has so far been a major hurdle. Angela Merkel’s government has long resisted calls by a group of European neighbours, including France, to sign on to a pledge to reach net-zero emissions by mid-century. Germany’s current aim is to cut greenhouse gas emissions by "80 to 95 percent" by 2050.

It was only in May of this year that Merkel signalled a turnabout. At the Petersberg Climate Dialogue she said her recently set up “climate cabinet” would debate how Germany could reach climate neutrality by mid-century. Should her ministers find a “sound” way to achieve net-zero greenhouse gas emissions by 2050, Germany would be in a position to officially support the pledge, Merkel had said.

Environment minister Svenja Schulze has been pushing for Germany to aim for climate neutrality by mid-century for some time. Her first draft of Germany’s planned Climate Action Law – which is meant to ensure that Germany reaches its 2030 targets – includes a call for climate neutrality and a 95 percent greenhouse gas reduction by 2050. However, the draft is heavily disputed within the government coalition, with some conservative politicians flat out rejecting it.

Ahead of this week's #EU Council meeting, #Germany gives in and joins the call of other Member States for #netzoro emissions by 2050. This is a major strategic shift https://t.co/1K8HgRc8lg #ClimateAction #nomorePillepalle #EUCO #SB50Bonn

That is why Merkel has set up the climate cabinet to produce agreements. After months of weekly student climate protests (Fridays for Future) and a slump in EU elections in which climate policy played a decisive role for voter decisions, Germany’s government coalition is under pressure to deliver. The climate cabinet has announced key policy decisions by September on how Germany can ensure it reaches its 2030 goals.

Germany’s decision to support a net-zero 2050 pledge would represent a “major strategic shift”, wrote Brigitte Knopf, Secretary General of the Mercator Research Institute on Global Commons and Climate Change (MCC), in a message on Twitter.

Miguel Arias Cañete, EU climate commissioner, welcomed Germany’s support for the 2050 target. “It is very much needed and hopefully it will now translate into an ambitious deal next week. Let’s get it done,” he told the Financial Times.

In an opinion piece for Süddeutsche Zeitung, Michael Bauchmüller said that Germany’s turnabout is also a success made possible by the Fridays for Future protesters. However, a commitment to climate neutrality by mid-century does not save the climate, he wrote. “If Europeans are serious, sooner rather than later they will have to form a big alliance for a CO₂ price, they will have to reform their agricultural subsidies in a climate-friendly way and review every euro they invest in new infrastructure.”

It is a full week for international and German climate policy. Before EU leaders get together in Brussels on Thursday, government representatives from signatories to the Paris Climate Agreement meet in western German Bonn to debate details on how to implement the landmark treaty, and prepare the upcoming UN climate conference in Santiago de Chile in December. Thousands of Fridays for Future protesters are set to take to the streets of Aachen on 21 June, and activists from the anti-coal movement Ende Gelände have announced mass action of civil disobedience in western lignite regions.

All signatories to the Paris Climate Agreement from 2015 are due to present long-term climate action plans by the end of 2020. At the same time, they must also update their current pledges to the Paris Agreement, known as nationally determined contributions (NDCs).

This week’s meeting in Brussels is the last one by EU leaders ahead of a UN summit in September, aimed at increasing global climate action. “A signed and sealed deal on climate neutrality would be a huge boon to the EU’s green credentials ahead of [the summit],” writes Morgan in EurActiv.

UN secretary general António Guterres has invited world leaders to a climate action summit in New York on 23 September 2019, with the objective of boosting ambition. In a recent guest article in the Guardian, Guterres said he wants all leaders to arrive “with concrete, realistic plans to enhance their nationally determined contributions by 2020, in line with reducing greenhouse gas emissions by 45 percent over the next decade, and to net zero by 2050.”

Finding an agreement to increase the EU’s current 2030 target of cutting greenhouse gas emissions by 40 percent over 1990 levels will be a tougher nut to crack than securing support for the 2050 plan. Government sources told Clean Energy Wire they did not expect EU leaders to agree to ratchet up the goal at this week’s summit.

EU climate commissioner Miguel Arias Cañete has said current policies have the bloc on track to beat its 2030 target, meaning the EU “would be in a position” to increase its Paris goal. German Chancellor Angela Merkel, however, has criticised Cañete’s push to officially raise the EU’s 2030 goal, and said she is “not so happy” about the proposal.