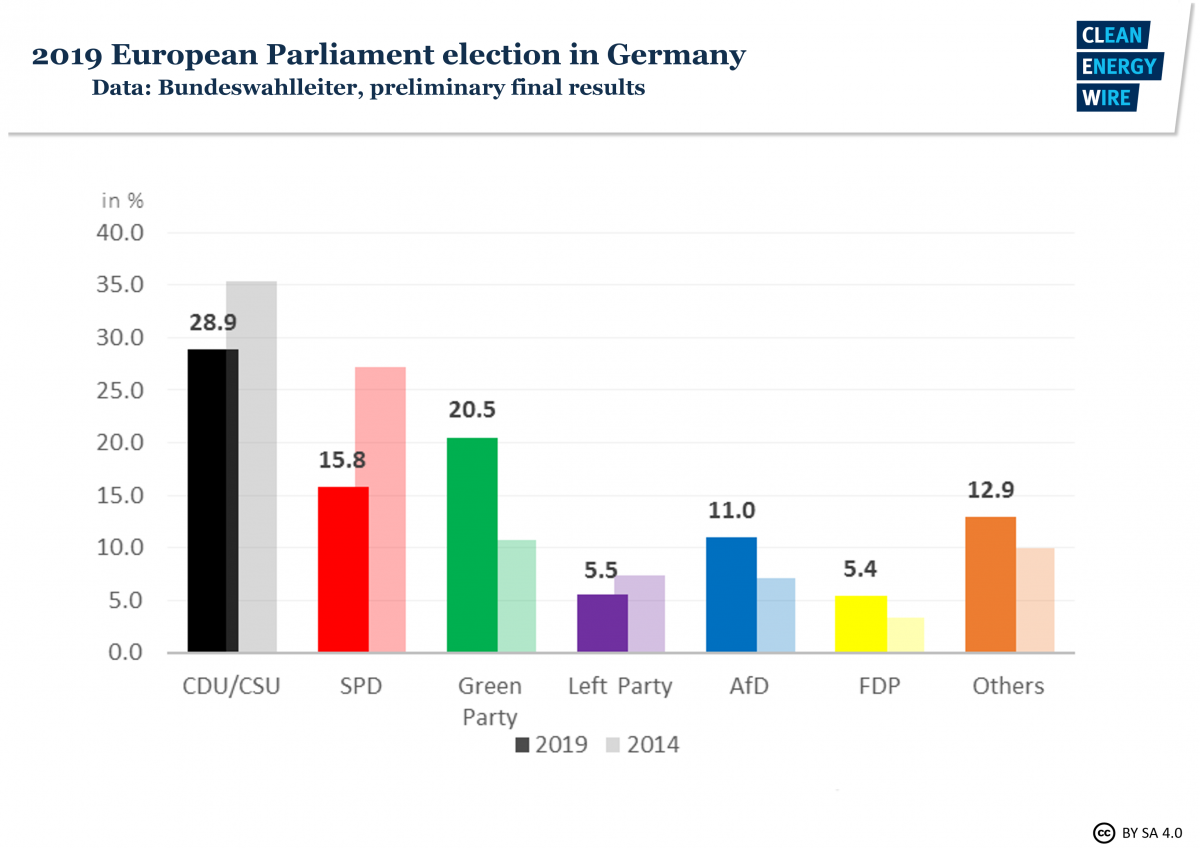 Germany’s ruling parties have taken another blow in the European elections, further rattling the fragile government coalition, as voters increasingly turn away from the established forces in the political centre. Against the backdrop of the highest turnout in EU elections in Germany since reunification, support for the Greens surged amid concerns over the global climate crisis, putting the party in second place. Chancellor Angela Merkel’s conservative CDU/CSU alliance remains the strongest force despite suffering significant losses, while the coalition partner Social Democrats (SPD) slumped to a record low in nation-wide elections. Some commentators called the vote a “climate election” as exit polls showed it to be the defining issue, while others pointed to a growing divide between urban and rural areas, as well as between eastern and western federal states. The SPD was also dealt a historic defeat in regional elections in Germany’s smallest and least populous state of Bremen, losing the majority for the first time in more than 70 years. In a surprise move on the day after the election, SPD environment minister Svenja Schulze sent her disputed climate action law draft to other ministers for coordination – just two days before Germany’s climate cabinet meets this week to debate way to reach 2030 goals. [Update adds climate action law dispute.]

German Chancellor Angela Merkel’s government parties have slumped again in the European Parliament election, which ramped up the pressure on an already fragile coalition and left the Green Party as the clear winner of the vote.

Against the backdrop of the highest turnout in EU elections in Germany since reunification (61 percent, compared to below 50 percent in 2014), Merkel’s conservative CDU/CSU alliance remained the strongest force despite its worst result in nationwide elections ever. The Social Democratic Party (SPD) continued its downward trend and finished third behind the exceptionally strong Greens, who even won most voters aged 60 and younger.

In the previous federal election, the CDU/CSU and the SPD still managed to secure a majority, but the so-called “Volkspartei” – meaning parties that reach beyond traditional voter groups and draw support from all strata of society – are on track to lose that title as the political landscape in Germany is becoming more and more fragmented.

The SPD’s decline in recent years has been met with criticism from the party’s left wing, which grows increasingly wary of the government alliance with Merkel’s conservatives. In a position paper written before the election and seen by public broadcaster ARD, several Social Democrats attach conditions to the grand coalition’s future, such as deciding the planned climate action law before the end of 2019.

Leading a “green wave” taking place in some other European nations as well, such as France and Ireland, the German Green Party came in second with more than 20 percent of the vote. It nearly doubled its result from 2014, and won over more than one million voters each from the conservatives and the SPD, compared to the last national election.

The success was apparently also due to the party’s popularity especially among young voters. Thirty-six percent of Germany's first-time voters chose the Greens, more than three times as many as voted for Merkel's conservatives, according to a poll by infratest dimap.

The poll also showed that the environment and climate topped the voters’ list of reasons for their decision. Forty-eight percent said that it played the largest role in their choice, trailed by other issues, such as social security and immigration.

For months, young activists from the Fridays for Future movement have been calling for more action against climate change with weekly protests across the EU, and put pressure on their governments to step up their climate ambition. The movement has left a noticeable mark on Germany’s political debate on climate, putting particular pressure on the parties in Chancellor Merkel’s government coalition. Days before the EP election, Merkel’s CDU came under additional pressure for its cack-handed response to a video published by a 26-year-old youtuber, who attacked the party for its record on issues important to younger people, including climate policy.

“This election was the first climate election,” Christoph Bals, policy director at the environmental NGO Germanwatch, commented in a statement on the vote. Many people in Germany are fed up with the government’s hesitation on climate policy, said Bals. “The election analyses show that the CDU/CSU and the SPD will lose the young people if they do not finally push through decisive climate action measures.” 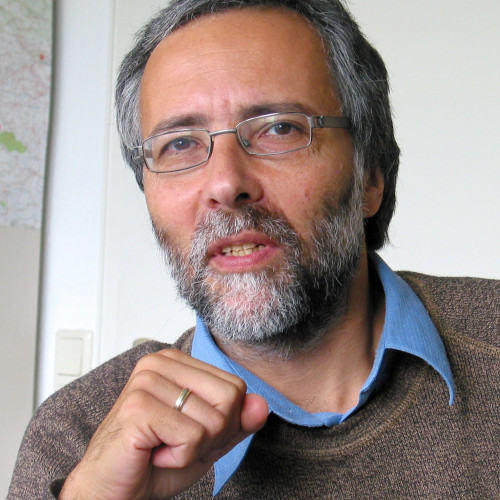 This election was the first climate election.

As a consequence, both CDU and SPD blamed their disappointing results at least partly on the poor communication of climate policies, said the Economist’s Berlin correspondent Tom Nuttall in a tweet.

In an interview with public broadcaster ARD, CDU head Annegret Kramp-Karrenbauer said that her party would continue to try and reach younger voters. However, “at the moment it’s true that we can neither credibly explain how to reach climate goals as a government, nor are we where we want to be as a party in our responses,” she said. Speaking at a press conference after results came in Sunday night, Kramp-Karrenbauer said the party leadership would meet in the coming days “to talk about how we can make advances in climate policy.”

Coalition partner SPD also sees the need to intensify action on climate. “We see that the population is putting the issue of climate protection right at the top,” deputy parliamentary group leader Matthias Miersch told the news agency dpa. The government has to decide the planned climate action law this year, he added.

Germany is under pressure to meet its goal of cutting greenhouse gas emissions by 55 percent by 2030, and Merkel’s government promised in its coalition agreement to introduce legislation by the end of 2019 to make sure the country reaches its climate targets. Social Democratic environment minister Svenja Schulze  presented a draft Climate Action Law in mid-February, which was met with criticism from its CDU/CSU coalition partner as it aims to enshrine existing CO₂ reduction targets for each economic sector into law and hold the individual ministries financially responsible.

To end the deadlock within the government, Merkel has set up the so-called climate cabinet, a group of ministers with key responsibilities for climate issues, which is to come up with climate action proposals by the end of the year. It’s unclear what will become of Schulze’s draft law, as the chancellery has not released it to other ministries for coordination – a regular next step in the legislative process.

In a surprise move – backed by the results on the day after the election – Schulze has now sidestepped Merkel and sent the draft to her cabinet colleagues seemingly without chancellery consent. “As the responsible minister for climate action, I can no longer show consideration for the sensitivities in the [conservative CDU/CSU] union,” she wrote on Twitter. “I cannot justify wasting any more time on this.”

The chancellery did not immediately reply to a request for comment.

“As the responsible min, I can no longer show consideration for the sensitivities in the [conservative CDU/CSU] union” https://t.co/lzbZHyTY6u

With the election results fresh on everyone’s mind, the ministers are scheduled to meet for the second time this week (29 May). Each ministry is supposed to present first proposals for measures on how to reach the targets in the individual economic sectors.

The simultaneously held regional and local elections across the country largely underpinned the EU election trends: weak centre parties with particularly big losses for the SPD, a surge in Green Party support and strong showing by the AfD, especially in the eastern states and rural areas.

First projections show that the SPD dropped to second place for the first time in more than 70 years in the elections in Bremen, Germany’s smallest and least populous state. The result could cost the party the decade-long reign in the city, as the CDU looks set to have won the largest share of votes. Coalition talks are bound to be difficult. The Green Party is a possible partner for both the CDU and the SPD, and it could end up as the kingmaker in the debt-ridden state. Both the CDU and the SPD have announced their intention to quickly initiate coalition talks. 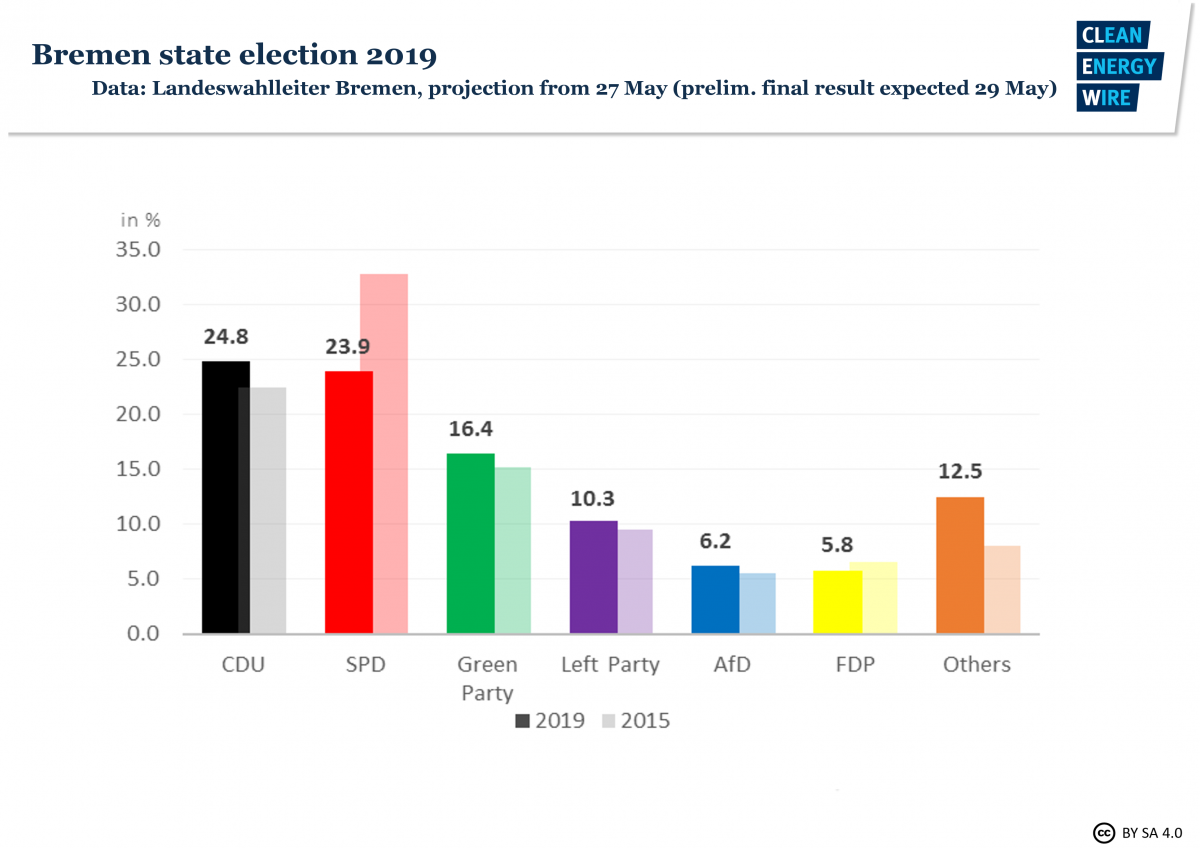 With a growing anti-establishment sentiment in an increasingly divided country, the far-right populist AfD was able to make significant gains. In Baden-Wuerttemberg, the party won the largest share of voters among workers, prompting public broadcaster SWR to write: “The AfD is apparently the ‘labour party’. 31 percent of workers voted for it, only 12 percent for the SPD.”

The AfD also fared especially well in the eastern German states in the EU election. It won in several electoral districts, and was even the strongest party in the states of Brandenburg and Saxony.

Together with the EU vote, residents in these states also elected new local councils and some mayors. While the Christian Democrats were able to win most of the contests in the lignite mining states of Saxony, Saxony-Anhalt and Brandenburg, the AfD gained massively and was able to come in first in a few votes.

The elections can be seen as a test for this autumn’s regional elections in some of these states. Climate and energy policy is set to play a key role, as it is also affected by the country’s plans to end coal-fired power production over roughly the next two decades. Economically weak regions in the east, in particular the mining region of Lusatia, still very much depend on coal as a source of income and jobs, and the AfD is exploiting anti-government sentiments to discredit the fossil fuel phase-out and the expansion of renewables as imposed ordeals. However, energy transition technology is also gaining ground in the eastern states and is becoming a growing industry in many municipalities.

Fridays For Future: Students protest for climate action ahead of EU election