Fridays For Future: Students protest for climate action ahead of EU election 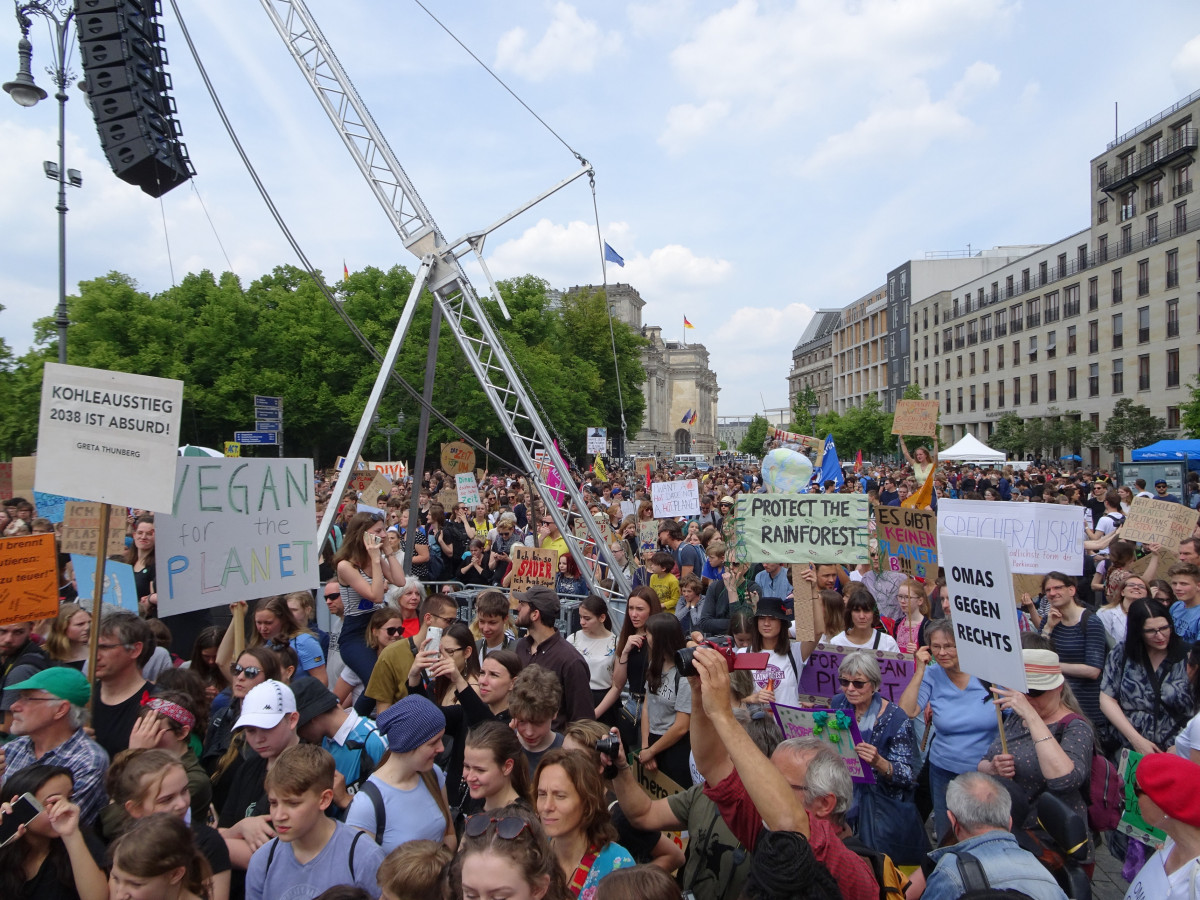 “I Hope a Party that takes climate seriously will be elected. In my opinion, the CDU has not done enough for the climate,” student Nina (14) told CLEW in Berlin. Source: CLEW/Clermont 2019.

Young climate activists across Europe took to the streets Friday to demand more ambitious climate action from politicians two days ahead of the main day of the EU elections. In Germany, “Fridays For Future” students protested in more than 200 cities, with record numbers of participants reported for example in Hamburg. The movement has left a noticeable mark in Germany’s political debate on climate, putting particular pressure on the parties in Chancellor Angela Merkel’s government coalition. Merkel’s CDU has come under additional pressure for its cack-handed response to a video by a 26-year old youtuber, who attacked the party for its record on issues important to younger people, including climate policy.

Tens of thousands of students and climate activists in Germany have joined protesters in more than 100 countries across the globe to demand from their governments more ambitious action on climate change.

At least 10,000 people, from toddlers to grandmothers, demonstrated near the Brandenburg Gate in Berlin on Friday, two days before the main day of the European elections.

“I’m convinced that everything we have done up until now will have a strong influence on the European elections,” said mother of three Claudia Prage. She temporarily gave up her job this past January to help found #parentsforfuture.

For months, the “Fridays for Future” climate strikes have brought students to the streets across Europe to demand more action on climate change. The protests were inspired by 16-year-old Thunberg, who began protesting in August 2018. In March 2019, German activist Luisa Neubauer joined student organisers from across the continent, including Thunberg, for a rally at Berlin’s Brandenburg Gate and announced that the movement would focus on the European elections.

“I’m convinced that everything we’ve done up until now will have a strong influence on the #EUelections2019,” says #parentsforfutures Mom of 3, Claudia Prage #ClimateStrike #Fridaysforfutures ⁦@cleanenergywire⁩ pic.twitter.com/9XkZ7A4qwt

The young activists, many of whom are not yet eligible to vote this weekend, called on youth across Europe to make their vote count. “If you, like me, are determined to bring attention to the ongoing climate crisis […], then going to vote is one of the most powerful things you can do,” said Swedish Greta Thunberg, who started the movement almost a year ago, in a message on instagram. “This is your chance as a young European citizen to have a say on what issues are prioritised in the EU for the next five years.”

Many analysts agree that the result of the EU elections will influence the future EU course on crucial energy and climate policy decisions.

The movement also issued a call in several European papers for a global strike day beyond the students' movement on 20 September as a start of a climate action week. “We’re asking adults to step up alongside us,” says the appeal signed by Thunberg and 46 youth activists from many countries.

In Germany, the movement planned strikes in more than 200 cities. The organisers said that Germany’s second largest city Hamburg saw a new record with some 17,000 protesters, while some 12,000 took the streets in Cologne. 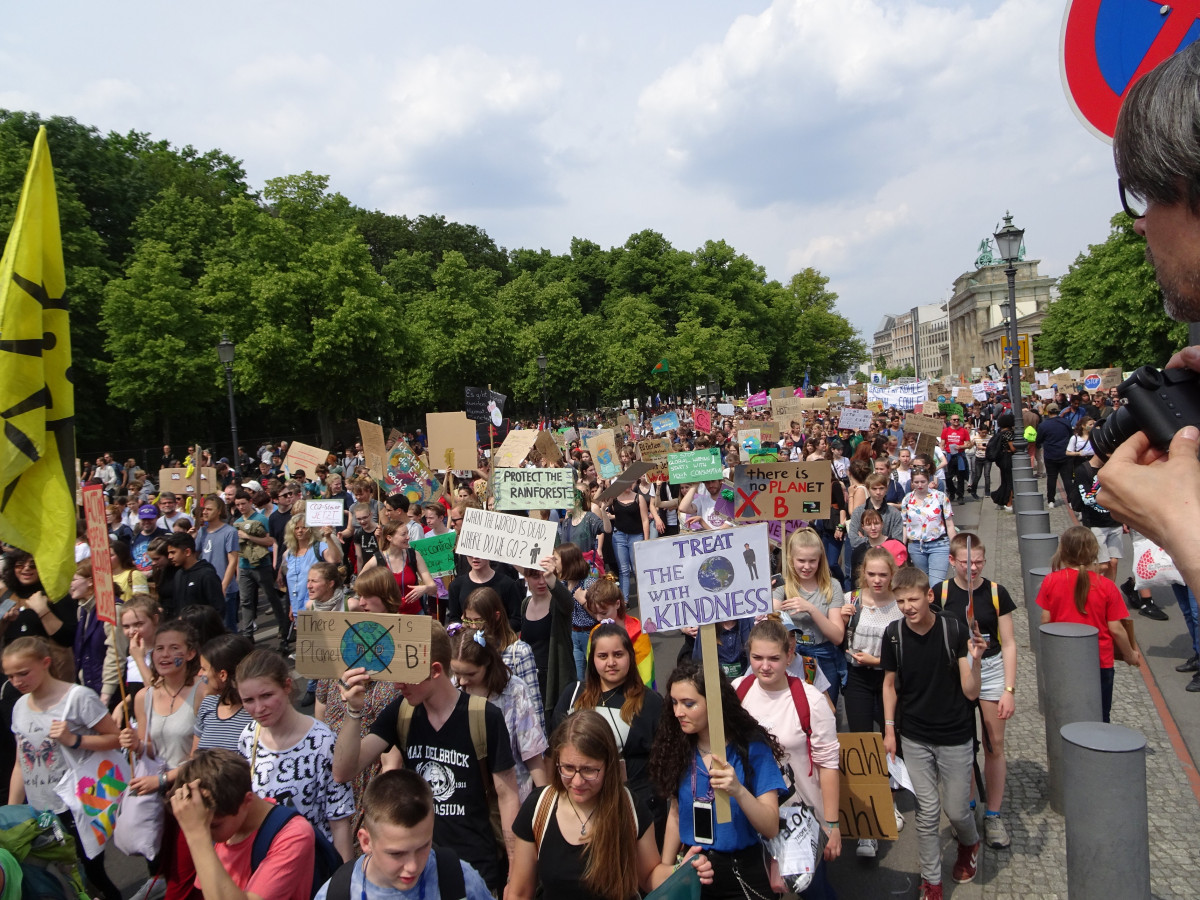 Between intervals of climate-themed rock music to stir up the crowd of mostly young people in Berlin, climate scientists confirmed what many of the demonstrators expressed in their chants and on their signs: that more needed to be done.

“The government is not doing enough to keep up with the Paris accord,” Stefan Rahmstorf, Head of Earth System Analysis at the Potsdam Institute for Climate Impact Research spoke to the crowd. “Germany is the 6th largest country with double the average co2 emissions in the world. The CDU says we have to make compromises but we cannot compromise with the Paris accord.”

#GretaThunberg effect here in #Venice and all over place in #Italy, like #Milan, #Rome, #Bergamo and #Bologna. They ask only a thing: solve #climatecrisis.#ClimateStrike #FridaysForFuture #EUelections2019 pic.twitter.com/6tCoj7UTui

The Fridays for Future movement has left a noticeable mark in Germany’s political debate on climate, putting pressure on the parties in Chancellor Merkel’s government coalition of conservative CDU/CSU alliance and the Social Democrats, struggling to agree on the details of the promised climate protection law and still due to present legal details for the planned coal exit. The CDU has come under additional pressure for its cack-handed response to a video by a 26-year old youtuber, who attacked the party in a nearly 1-hour long video with over 7.5 million viewers for its record on issues important to younger people, including climate policy.

Commentators have taken the party’s first condescending and then helpless reaction as another sign that it was out of touch with younger voters, a view shared by 77 percent of those surveyed in a poll for conservative daily Die Welt. The youtuber Rezo doubled down with a second video in which he and over 70 fellow youtubers called on young voters to make the EU election a vote on climate and support only parties with a clear stance for climate action.

Fourteen-year-old pupil Nina echoed the views at the protest in Berlin. “I hope a party that takes climate seriously will be elected. In my opinion, the CDU has not done enough for the climate,” she told Clean Energy Wire.