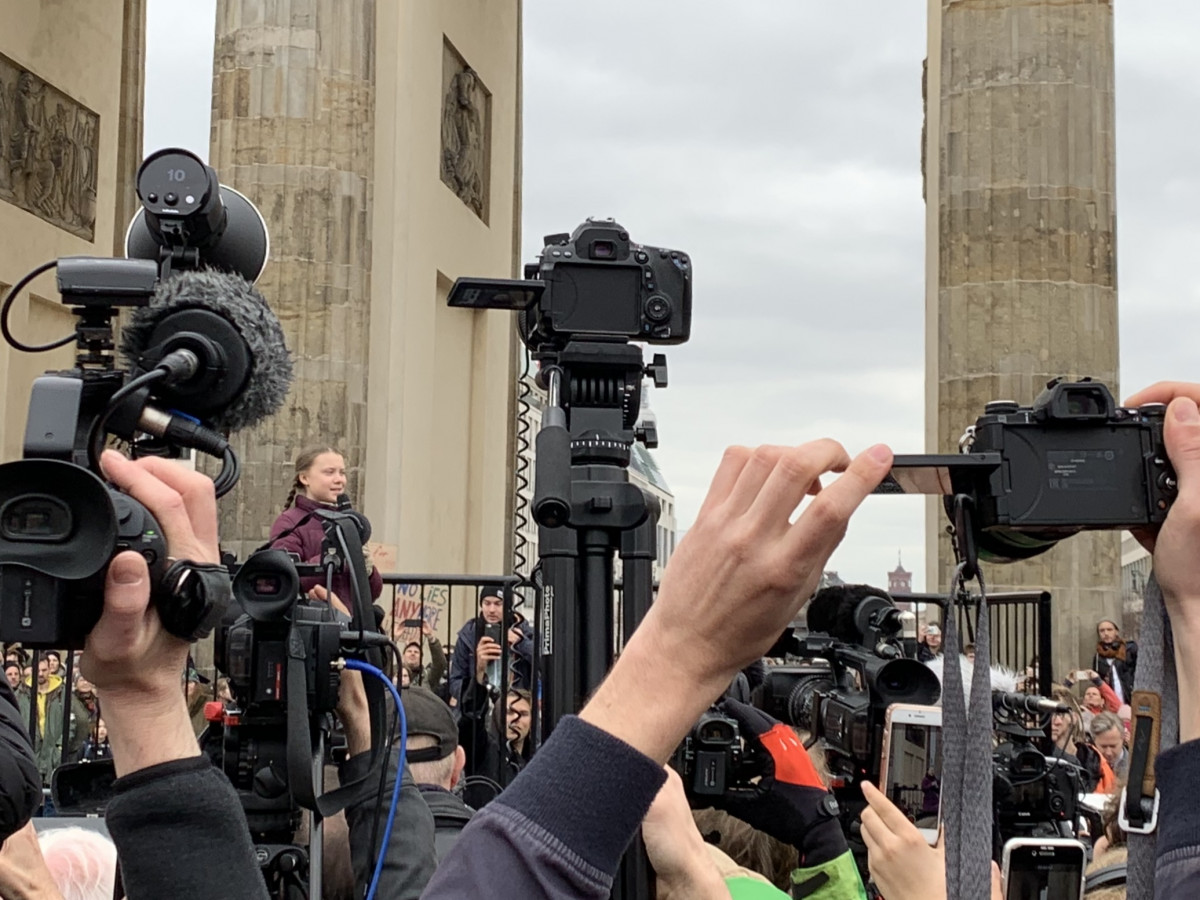 Swedish climate activist Greta Thunberg was met with a swarm of cameras and thousands of supporters when she spoke at Brandenburg Gate in Berlin on March 29, 2019. Photo: Rachel Waldholz

Swedish activist Greta Thunberg visited Berlin on Friday, joining thousands of young people who took to the streets in the most recent "Fridays for Future" school strike demanding more action on climate change. Protesters again gathered in front of Germany’s economy and energy ministry before marching to the iconic Brandenburg Gate, where the 16-year-old activist spoke for about two minutes. She was joined on stage by young climate activists from across Europe, who pledged to make climate change a central focus of the upcoming European elections. “The older generations have failed tackling the biggest crisis humanity has ever faced," Thunberg said.

Greta Thunberg, who became an international symbol when she launched her own "school strike" to demand climate action in Sweden last year, told a crowd of thousands of protesters in Berlin that they must keep up the pressure on politicians.

"When we say to them that we are worried about the future of our civilization, they just pat on our heads, saying ‘Everything is fine, don’t worry,’" Thunberg told the crowd.  "But we should worry. We should panic. And by panic, I don’t mean running around screaming. By panic, I mean stepping out of our comfort zones. Because when you are in a crisis, you change your behavior."

"We want a future. Is that too much to ask for?" Thunberg said, before promising the crowd, "We still haven’t seen anything yet. This is only the beginning of the beginning. "

After Thunberg spoke, German organizer Luisa Neubauer brought student activists from across Europe on stage to announce the new focus on the European Parliament elections, scheduled for May.

“We are saying, 'Europe we’re coming,'" Neubauer said, speaking in both German and English. "We are going to make the European elections about the climate. We’re not letting borders separate us. And we’re not letting them steal our future!”

According to newspaper Tagesspiegel, Thunberg also planned visit the Potsdam Institute for Climate Impact Research (PIK) near Berlin to learn about the latest developments in climate research.

Thunberg has become an international symbol as hundreds of thousands of schoolchildren around the world have joined "school strikes" following her lead. Meanwhile, a study from research institute ipb analysing the background of participants at the demonstrations across Europe found that they are indeed dominated by school students, many of whom took to the streets on 15 March for the first time ever. The researchers interviewed protesters in nine countries and found that nearly 58 percent of protesters were female. Almost 53 percent of participants were aged 14 to 19 and nearly 70 percent said that Thunberg had inspired them to take part in the protests. Around 85 percent said they are confident that political action can still curb climate change.

The Fridays for Future school strikes for more rigorous climate action have initiated a broad debate in Germany over the effectiveness of its climate policy and the role of young people in pushing for political action. While Chancellor Angela Merkel has openly supported the students, critics have called her “hypocritical," arguing that her government is not taking ambitious enough action on climate change. Others have argued that she is undermining school authorities by giving tacit approval to students who skip school for the protests.