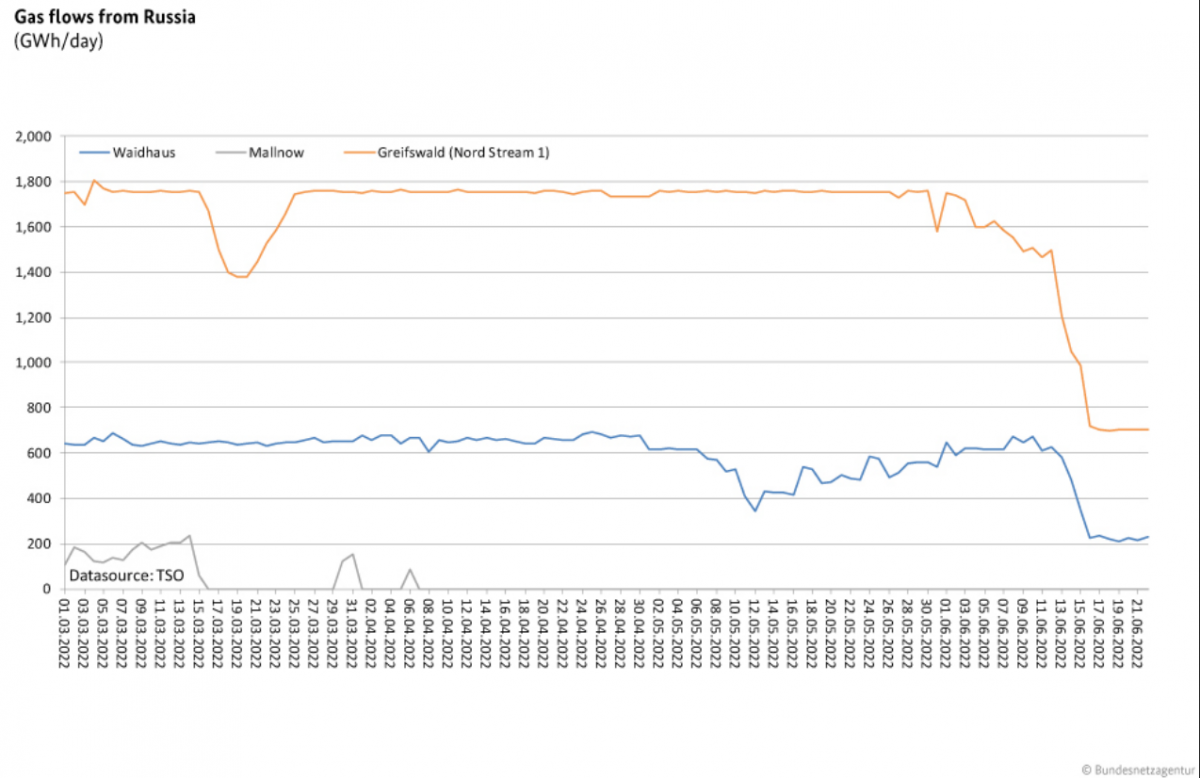 Flows from Russia to Germany have dropped significantly since mid-June 2022. Source: BNetzA

The German government has launched the second of a total of three escalation stages of its national gas supply security plan, which was drawn up in reaction to Russia's invasion of Ukraine. After triggering the first "early warning" stage shortly after Russia's attack began in February, the reduction of gas flows from Russia to Germany since mid-June led the energy ministry to launch the second "alert stage," which is supposed to prepare gas consumers for further rising prices and possible supply bottlenecks while still largely relying on market mechanisms. The country's grid agency warned avoiding critical supply shortages would depend on the success of gas saving efforts and intra-European gas trading, while industry representatives said skyrocketing prices could not be shouldered by companies alone.

Citing a “tense situation” following last week's Russian supply cuts, Germany’s economy and climate ministry (BMWK) has sounded the official alarm by triggering the second phase of the country’s gas emergency plan, the so-called 'alert' stage. The ministry also in charge of energy policy attributed the move to the reduction in gas supplies from Russia that began on 14 June as well as the continued high price level on the gas market. Germany’s gas storage facilities are 58 percent full. “However, should Russian gas deliveries via the Nord Stream 1 pipeline remain at the low level of 40 percent, a storage level of 90 percent by December can hardly be achieved without additional measures,” the ministry said. Calculations by the federal network agency (BNetzA) showed that most scenarios for next winter include a gas supply deficit in Germany, depending on how much national consumption could be reduced and on how much gas continues to be exported to neighbouring countries. Energy industry representatives highlighted the need for solutions on how crisis-induced additional costs for gas procurement of suppliers can be shared by all consumers.

The "alert" stage is triggered by a serious disruption to gas supplies, but still relies on market mechanisms to remedy the situation. It's only in the ultimate "emergency" stage that the state would directly intervene in the gas market to secure supply to "protected customers," such as private households, small businesses and hospitals - possibly at the expense of large industrial consumers.

“Even if gas quantities can still be procured on the market and stored, the situation is serious and winter will come,” added economy and climate minister Robert Habeck. “We mustn't delude ourselves: cutting gas supplies is an economic attack on us by Putin. It is clearly Putin's strategy to create insecurity, drive up prices and divide us as a society. We are defending ourselves against this. But it will be a rocky road that we as a country now have to walk. Even if you don't really feel it yet: we are in a gas crisis.” Prices are already high and Germany must brace itself for further increases, he stressed. “This will affect industrial production and become a major burden for many consumers. It's an external shock.” Habeck also warned that after the scheduled maintenance of gas pipeline Nord Stream 1 in July (11.07 – 25.07) where flows are reduced to zero for around 10 days every year, Russia could decide to prolong the cut; while scenarios by the Federal Network Agency (BNetzA) already include the case that deliveries are not resumed at all after the July maintenance work.

Apart from saving gas and increasing the import of liquified natural gas (LNG) in response to this, the climate ministry is also looking into repurposing the tubes of unused gas pipeline Nord Stream 2 for creating an LNG terminal on the Baltic coast, according to reporting by Der Spiegel.

Industry group BDI said that calling the alert level was the obvious response to the increasingly tense supply situation, adding that a solution on how crisis-induced additional costs for gas procurement of suppliers can be shared by all consumers had to be found.

The association of municipal utilities VKU also warned that the rules for safeguarding customers from price hikes, while at the same time preventing insolvencies among utilities, would have to be amended.

The network agency BNetzA said gas prices had in some cases increased sixfold in the past months, even though most customers in the country had not yet been affected by that and currently would only see effects caused by price increases occurring last year, well before Russia’s invasion was launched. These had already inflated prices by up to 80 percent, but current developments could see prices for gas climbing much higher, BNetzA head Klaus Müller told public broadcaster ARD. These “gigantic price jumps“ would likely not be passed on to customers one-by-one, but households could still expect their heating bills to triple, depending on the individual situation of the buildings they live in, Müller said.

NGO Greenpeace said that consistent energy saving is now the order of the day and called on the government to end all subsidies that keep gas consumption high, i.e. by the installation of new gas heating systems and the support for combined heat and power generation with gas and to make efficiency building renovations mandatory.

The scenarios calculated by the BNetzA for Germany’s gas supply situation next winter show that even if deliveries through Nord Stream 1 remain at the 40 percent level, having storages 90 percent full by 1 November is only possible if one assumes that intra-European gas deliveries are no longer complete and that gas consumption this winter is 20 percent below normal. Three out of the seven scenarios calculated by the BNetzA conclude that there will be a gas deficit at some point next winter. “The decisive factor is the reduction of domestic consumption in order to secure security of supply and the necessary supply of neighbouring countries,” they write.

Replacing Russian gas is set to be a major focus at this week’s G7 summit in Bavaria’s Schloss Elmau.