Germany's ranking in the World Economic Forum's Energy Transition Index has slid to 20th this year from 17th last year. "It demonstrates a strong enabling environment, ranking 11th on the 'transition readiness' sub-index," the WEF told Clean Energy Wire. "Prior to the disruptions of COVID-19, Germany demonstrated a strong commitment towards the exit from coal, and the decarbonization of industry through the development of infrastructure for Hydrogen. Affordability of energy services for households is a potential challenge, highlighting the debate on distribution of costs of energy transition. The current climate of economic uncertainty has further exacerbated affordability concerns," it added. The highest-ranking countries were Sweden, Switzerland, and Finland.

The WEF ranked Germany 45th in system performance, broadly unchanged from last year. Germany scored particularly poorly in industry power prices (ranking: 110th of a total of 115 countries ranked) and household power prices (89th), and CO2 per capita (96th), according to the WEF's country scorecards. In contrast, it came first in renewable energy regulation, investment in energy efficiency, and infrastructure & innovative business environment. The index has been criticized in the past for putting too much focus on price developments, especially as industry power prices in Germany are notoriously hard to quantify.

"Progress among the world’s 10 largest energy consuming countries has been mixed. Emerging centres of demand such as China and India show strong improvement, while the trend has been moderately positive in Germany, Japan, the Russian Federation and South Korea," the WEF said. The organisation said the COVID-19 crisis risks derailing long-term progress, and has already hit energy systems by eroding global energy demand, creating unprecedented oil price volatility, delaying or stalling investment and projects, and creating uncertainty for millions of energy-sector workers. WEF urged countries to invest in innovation in order to overcome the current economic crisis. "Evidence from an analysis of public investment in R&D in Germany during the economic crisis of 2008‑2009 indicates spillover effects on production, value‑add and employment worth twice the initial investment," the WEF said. 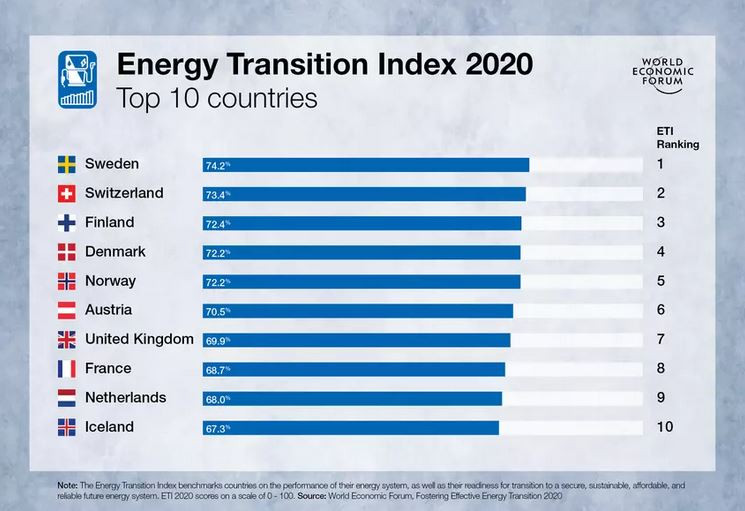 What German households pay for power