Gov advisors say Energiewende will only thrive in European framework

The German government’s Energiewende advisors say the country must put much greater emphasis on the project’s European dimension to achieve the shift to renewables and the necessary emissions reduction during the next decade. The group calls for a joint European energy transition monitoring scheme that promotes best practice and helps the country adopt policies from abroad in areas where it lags behind. Greater Energiewende cooperation would help protect the climate, increase power supply security, and make the transition cheaper for everyone, the experts say.

The German government’s advisors agree that a European dimension is indispensable for the country’s energy transition strategy, and it must be heeded in order to successfully manage the shift from a fossil-fuel based to a renewables-based energy system. “Germany’s Energiewende is embedded in a European Energiewende and its ambitious goals for 2030 and beyond,” the expert commission tasked with monitoring the energy transition’s progress says in its opinion on the federal economy ministry’s latest Energiewende Monitoring Report [Read an analysis of the report's other findings here].

In its non-binding advisory opinion on the ministry’s 6th Energiewende Monitoring Report, which was published on 27 June, the group argues that the upcoming EU legislative package on integrating national energy systems across borders and improving international political and academic cooperation on issues related to the energy transition are key to achieving meaningful emissions reduction, while maintaining economic prosperity and a secure power supply. The Energiewende experts particularly endorse the European Commission’s proposal to establish a regular energy transition monitoring system across Europe, in which the participating countries can give detailed accounts of their emissions reduction ambitions and outline the steps they plan to take.

“We face quite similar problems in many countries in the world. Exchanging our experiences in energy transformation in a uniform monitoring format could achieve a lot,” the government advisors’ group leader, economist Andreas Löschel, told the Clean Energy Wire. Löschel argued that an international approach to Energiewende monitoring practiced by the German government could help spread best Energiewende practices to other countries, and also help the German government learn from the growing number of examples as countries around the world set out to overhaul their energy systems.

The expert group says that European countries must define their related goals jointly and must coordinate their climate and energy policy moves to avoid duplication of work. “We want to learn from one another – and not just sell the Energiewende as a ‘success model made in Germany’ to other countries,” the advisors say. The German government could greatly benefit from an independent international monitoring commission that would evaluate progress across Europe, especially since many countries fare much better than Germany in particular energy transition categories. “It seems absolutely justified to systematically observe the energy and climate policies of other countries and to adopt elements if applicable,” the government advisors say.

The group also criticises the negligence of the German government regarding the struggles other nations face in coping with the influx of excess German wind power in the transnational power grid. “The renewables expansion in combination with the lack in grid expansion on Germany lead to a disintegration of the European domestic market,” they warn.

Germany has increased the share of renewables in its energy mix to about a third over the past two decades by financially supporting investments in wind turbines, solar panels, and other forms of renewable energy generation through a surcharge customers pay with their power bills. While the carbon emission of Europe’s largest economy was on a steady decrease initially, it then remained practically unchanged for almost a decade, prompting criticism that the costly transition from fossil and nuclear power to more sustainable energy sources fails on its primary objective of reducing CO2 emissions. Among the greatest obstacles are Germany’s continuously high share of coal-fired power production and the transport sector, whose emissions have been on the increase and which is currently the subject of intense debate as the EU is about to introduce new emissions limits for the car industry, Germany’s biggest industrial sector. 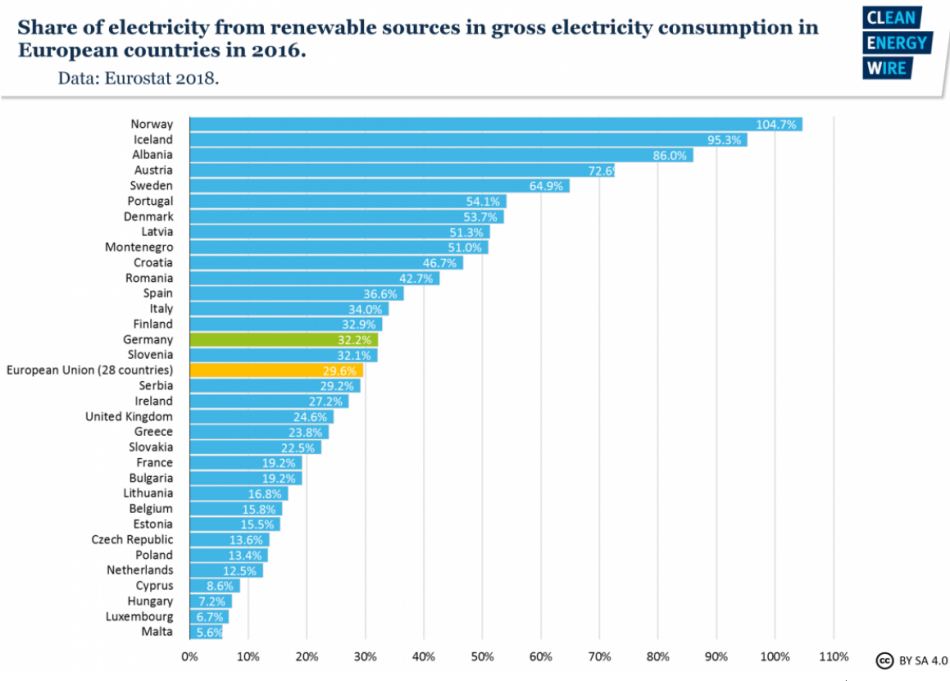 International climate activists like former US Vice President Al Gore have praised Germany for its merits in making renewable energy sources competitive for the benefit of the whole world. But on the very first day of Germany’s newly installed coal exit commission, Gore warned that stagnating emissions levels could indicate that “now comes a time where Germany is at risk of being left behind.”

The government advisors’ Energiewende Monitoring Report backs this assessment by saying that, apart from renewable energy generation, Germany will have to “make greater effort to comply with its binding national EU contributions to meeting the 2020 emissions reduction targets.” While the EU as a whole has already met its 2020 target of reducing greenhouse gas emissions by 20 percent compared to 1990 levels, the German government has recently had to officially abandon its more ambitious national target of 40 percent, as time is running out close the current gap of more than 10 percentage points.

In the report, the government advisors also emphasise that supply security and price stability - the other key priorities for the energy transition besides emission reduction - can be much better guaranteed in a European context than in a predominantly national setting. “The European power market is a reality and contributes to supply security,” the advisors say. This is thanks to the fact that the German market is embedded in a European context through its neighbours as well as via Sweden and Norway.

As a result of this increasing interconnection, the balancing effects on intermittent renewable power production are much stronger in a large geographical area like Europe than in a single country.“ Doldrums and peak demand do not occur in all countries at once.” Its reliable grid connection to its neighbours also enables Germany to reduce its installed generation capacity and curb the Energiewende’s total costs. The experts say that, alongside renewable energy integration, Germany should also pursue a more transparent and pan-European approach to its natural gas supply [See the CLEW dossier on The role of gas in Germany's energy transition]. Germany currently pushes for completion of the contentious Russian gas pipeline Nord Stream 2 despite objections from several of its EU neighbours.