The production of renewable energy in Germany dashes to a new record output, providing more than 40 percent of the country's power supply in the first half of 2018. Yet, the good news for proponents of Germany's trademark Energiewende come as the government is embroiled in an unprecedented quarrel over migration policy that has brought the coalition to the brink of collapse. As experts warn that climate and energy policy are marginalised in German politics, the recent launch of a commission to find a path to end coal-fired power geneneration has fuelled hopes that the country's recent lacklustre record on emissions reduction will improve, too.

With a total net output of 113 terawatt hours (TWh) since January, the renewables share was nearly nine percent higher than during the same period last year and over a third higher than in 2014.  Between January and June, wind turbines produced 55.2 TWh, making them the strongest renewable energy source in the German power mix second only to lignite plants, which produced 66.7 TWh.

The good news for German renewables expansion come amid a tough quarrel in the conservative camp of the country’s government over migration policy, which has slowed policy making in other areas, including energy and climate. The “chaotic” strife between Chancellor Angela Merkel’s conservative CDU and its Bavarian sister party CSU over Germany’s treatment of refugees and asylum seekers prevents that any progress is achieved in other fields, energy policy newsletter Tagesspiegel Background says.

“It’s especially frustrating that the industry is ready to tackle a big, climate-friendly investment cycle,” the authors say. Disregarding warning calls from industry and policy observers, the quarrel reached a critical point on 1 July, when CSU party leader and federal interior minister Horst Seehofer offered to resign if Merkel does not adopt several migration policy proposals his party proposed. 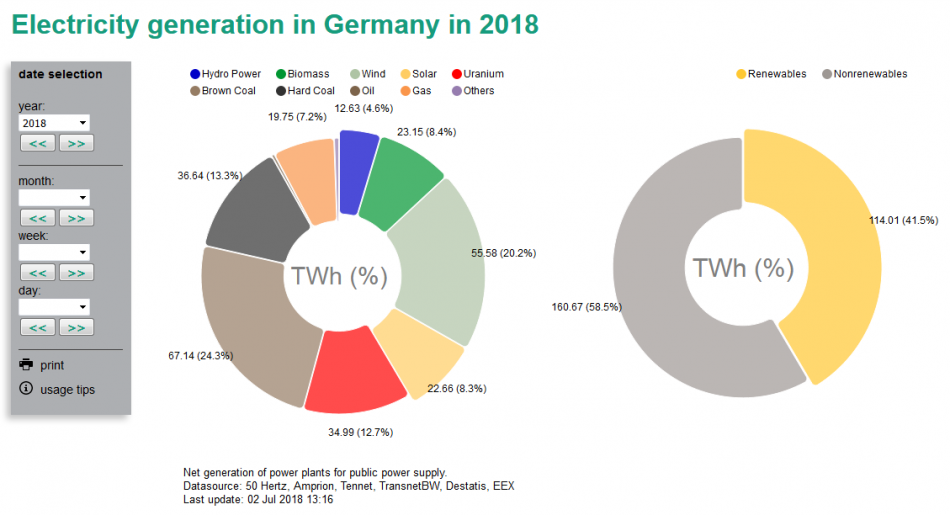 Also the government’s monitoring report on the Energiewende, Germany’s dual shift from nuclear and fossil power sources towards renewables, says the project becomes increasingly neglected. “If you look at the developments throughout the last year, it becomes clear that today the energy transition is not assigned the same political priority as it used to have some years ago,” the advisor group’s head, Andreas Löschel, told the Clean Energy Wire. He warned the Energiewende must not lose public acceptance due to its high costs and little success in emissions reduction.

The advisors say that apart from successful renewables expansion, the likely failure to meet the national 2020 climate target and the ramifications 2030 target standing out as major shortcomings of current Energiewende management. Germany’s emissions have practically stagnated in recent years, partly due to a sustained period of economic growth and partly due to excessive transport emissions, which have even gone up recently, and its heavy reliance on coal in the power mix.

Germany’s renewable energy industry is worried that the expansion of wind, solar and other regenerative sources could lose momentum and that the country will not meet its ambitious 2030 target of reaching a renewables share of 65 percent in power consumption. Companies are particularly worried that two special auctions for wind and solar power capacity that the government coalition promised in its coalition treaty will not take place early enough to guarantee a stable expansion path.

The government says that any further efforts in renewables expansion hinge on a commensurate expansion of the grid [See the CLEW dossier on The energy transition and Germany’s power grid] but critics say the government struggles to set up a legal framework because political infighting consumes much of its resources.

One of the few concrete energy and climate policy projects the government has achieved so far has been the launch of Germany’s coal exit commission. Coal-fired power production remains the most important energy source in Germany, with hard coal and lignite-fired plants together contributing 37.6 percent to the power mix. According to the figures released by Energy Charts, hard coal use dropped by more than 20 percent but the use of lignite was reduced by less than two percent during the first six months of 2018.

Securing a stable power supply hinges on the development of grid capacities and storage technology, as Germany‘s renewable power capacity expansion continues. In the first half of 2018 offshore wind power fed 9.1 TWh and solar power plants 22.3 TWh into the grid, over 12 percent more than in the same period one year before. Shortly after 12 noon on 6 May, over 50 percent of Germany’s total power generation came from solar power alone. Hydropower contributed another 12.5 TWh, and bioenergy plants 23 TWh.

Weather conditions in Germany have been very favourable for renewable power production in recent months. While strong winds allowed the country to briefly cover 100 percent of its power demand from renewable sources for the first time ever at the beginning of January and again in early May, unusually sunny weather since April has boosted renewable energy production. According to Bloomberg news agency, July will likely witness new output records for solar power in the country.

Germany has exported a total of 22 TWh of electricity since January, 14 percent less than in 2017. The country still was a net exporter for 86 percent of the time since the beginning of the year. Most power exports went to the Netherlands and most imports came from France but most of the imported power was passed on to yet other countries as Germany is Europe’s main electricity transmission hub. The average wholesale power price climbed from 34.05 euros per megawatt hour (MWh) to 34.75 euros/MWh, Energy Charts said.

Fraunhofer ISE specified that while the share of renewables in net power generation - the mix that power customers draw from their sockets - was over 40 percent, the respective figure in gross power production stood at only 38 percent. Gross power generation includes own generation by industrial companies as well as on-site power used by the plants to operate - none of which end up in the public grid.