Factsheet
The price tag for Germany’s energy transition is one of the project’s most controversial aspects. Estimates on how much money the country will eventually have to invest in the shift to renewables and the good-bye to nuclear power vary wildly to this day. But the overall economic costs and benefits of the Energiewende will always remain elusive, because any assessment involves unavoidable guesses on what would happen to the world’s fourth largest economy without an energy transition. Additionally, any serious calculation must also consider the extent to which the Energiewende will eventually lower the economic and social costs of climate change.

The energy transition’s costs have been a political hot potato since the early days of the so-called Energiewende in Germany. But the debate has shifted considerably in recent years. While some early detractors called the entire enterprise into question for economic reasons, Germany’s national climate targets - and more recently the Paris Climate Agreement – have firmly established that doing nothing to counter climate change is no longer an option. This is why serious arguments about costs today do not question the energy transition as such, but rather focus on the economic effectiveness of current policies, and on the questions of who pays, and who will benefit? 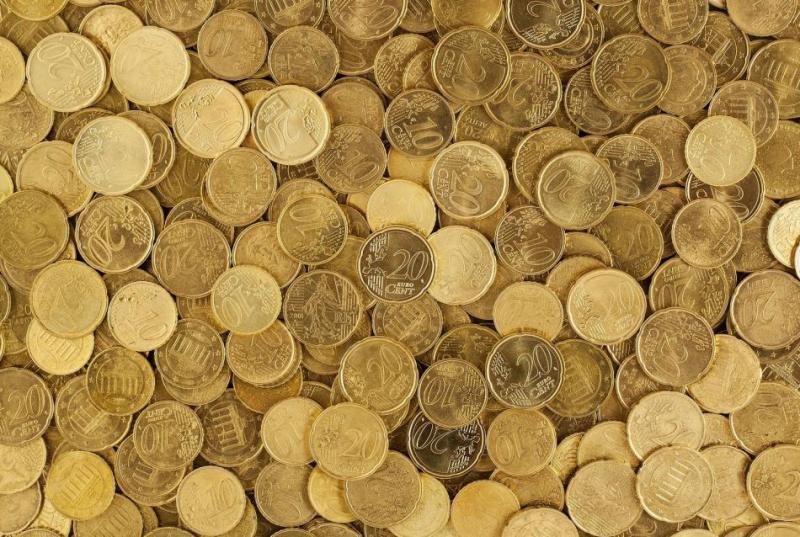 Critics argue that the government’s current plans  to phase out nuclear and fossil fuels are prohibitively expensive, and will undermine Germany’s status as an industry powerhouse; while proponents insist that it is a comparatively modest investment that will pay for itself, translating into benefits rather than costs in the longer term. [Find more details in the dossier The energy transition’s effects on the economy]

Discussions about the energy transition’s price tag are fanned by a peculiarity of Germany’s payment system for the rollout of green energies: power consumers pay a renewables surcharge with their bills. This method might be more transparent than many alternatives based on direct state subsidies, but it also elicits public debates about the costs. [For more details, read the factsheets What German households pay for power and Industrial power prices and the Energiewende]

The debate about the costs associated with the energy transition is not limited to Germany. For example, similar questions are being raised in France, Britain, and the Netherlands, and organisations like the International Renewable Energy Agency (IRENA) and the International Energy Agency (IEA) have also analysed the investment needs for low-carbon energy systems. Many studies have also attempted to put a price tag on the projected damages from climate change to show the economic benefits of mitigating it in the first place.

From a scoop of ice cream to trillions of euros

Former Green environment minister Jürgen Trittin famously said in 2004 that the burden placed on households by the renewable energy surcharge would amount to “only around one euro per month, the price of a scoop of ice cream.” But the renewables boom of the following years has quickly inflated the renewables surcharge, making Trittin’s figure obsolete and an easy target for ridicule.

The current economy and energy minister, Peter Altmaier, caused a stir in 2013 when he said during his time as environment minister that “the costs of the Energiewende and of the transformation of our energy supply could add up to around one trillion euros by the end of the 2030s” without policies in place to lower the costs. He explained that legal commitments to support renewable energy alone would add up to about 680 billion euros by 2022, and that the costs of grid extension, back-up power generation capacities, research & development, electric mobility, and the modernisation of buildings would have to be added to this figure.

Altmaier’s ministry later said that his cost estimate was “not based on a detailed calculation, but rather indicates a possible magnitude.” Advocates of ambitious climate protection countered that Altmaier vastly overestimated the cost of renewables, and that he neglected expenditures on conventional power stations, environmental damages, and climate change in general that would be necessary without the Energiewende. If these avoided costs were taken into account, the whole project would generate economic benefits rather than costs, according to the Energiewende’s proponents.

The trouble with price tags

The debate about Altmaier’s contentious estimate reveals the problems associated with quantifying the costs of the Energiewende. Adding up the money spent on renewables, and on phasing out nuclear power, only results in a sum that shows the energy transition’s investment needs. But a calculation of the Energiewende’s true overall economic costs must also take into account the projected savings. This inevitably involves the comparison with a “counterfactual” or “business as usual” scenario that answers a hypothetical question: “What would have happened if Germany had not embarked on the Energiewende at all?” In other words, it is key to quantify the extent to which investments represent true additional costs, and to determine whether they are outweighed by economic gains.

This comparison involves countless assumptions: What would have happened to economic growth, employment, and energy prices without the energy transition? Which expenditures on power stations, grid infrastructure, buildings, cars, or machinery would have been necessary anyway? What would have been the additional costs to the environment and the climate?

Because of these uncertainties, the German government said, in early 2018, that the total costs of the Energiewende are unknown. “The Energiewende’s costs can only be calculated by comparing an energy system in transition to another one that does not include this feature.” The government added that a cost calculation would also have to include follow-up costs “caused by environmental pollution, damages to public health, and the long-term consequences of unabated climate change.”

However, Germany’s Federal Court of Auditors (BRH) has repeatedly criticised the government for failing to come up with an overview of expenses associated with the Energiewende, such as the renewables levy, grid fees, administrative staffing, and lost revenue due to tax rebates. According to the court, the controlling and coordination of Energiewende-related costs is insufficient and fails to address “fundamental questions.” [For details, read the article Government lacks overview of Energiewende costs – auditors]

Back in 2017, energy think tank Agora Energiewende* compared five comprehensive studies on the additional costs of the Energiewende, which assess “business as usual” scenarios in the context of energy transition-related investments. Some of these studies arrive at opposite conclusions on whether the Energiewende will bring added costs or benefits, mainly because they make different assumptions about the future costs of fossil fuels, technologies, interest rates, and CO2 emission rights.

But, according to the think tank, the studies (compiled by think tanks EWI, Prognos & GWS; Fraunhofer ISE; Fraunhofer IWES; as well as Fraunhofer ISI & the Institute for Applied Ecology) come to six common positions despite their different assumptions: 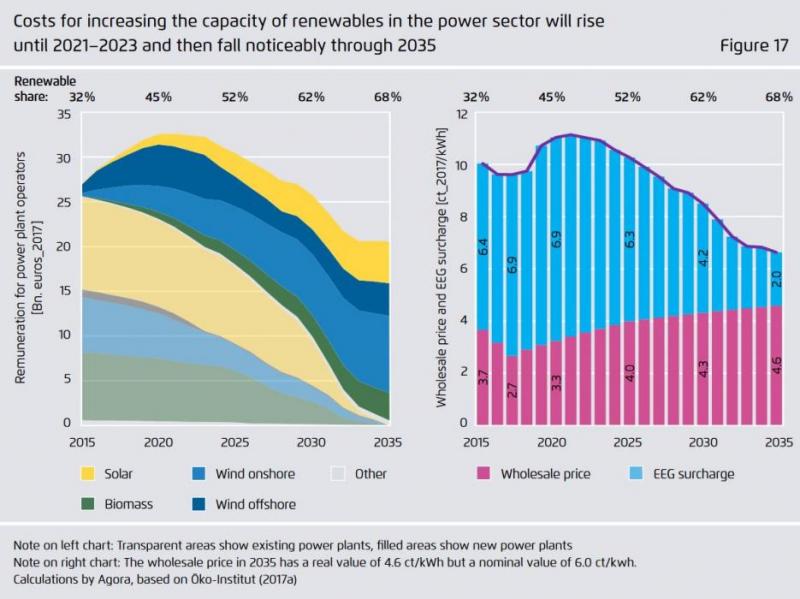 Other authors also stress that the amount of renewable energy support paid by consumers through their power bills (currently around 25 billion euros per year) is largely due to Germany’s role as a pioneer – the country embarked on the project when renewable energy prices were many times higher than they are today. Since support payments are fixed for 20 years, this approach has created a “backpack” of costs the country still carries today. For example, renewable energy support totalled 24 billion euros in 2015 because of past commitments. Calculated at 2015 wind and solar tariffs, this sum would have shrunk to 10 billion euros.

This is why a paper published by former utility manager Thomas Unnerstall says that the high costs of the Energiewende in Germany should not put other countries off the shift to a low-carbon future. “There [is] no doubt that the German Energiewende, at first sight, does not serve as an encouraging example in this respect,” Unnerstall argues. “A closer look at the costs of the German energy transition, however, reveals that around 75 percent of them are due to two particularities of the Energiewende that do not hold true for other energy transitions: the politically enforced nuclear phaseout, and the fact that Germany massively expanded renewable energies at a time when they were still very expensive.”

As Unnerstall correctly points out, Germany still faces an as yet unspecified bill for its use of nuclear power. The costs of decommissioning nuclear power stations – Germany plans to switch off the last one in 2022 – and storing radioactive waste will likely exceed 65 billion euros, according to environment ministry estimates. [Find all the details in the factsheet Nuclear clean-up costs.] 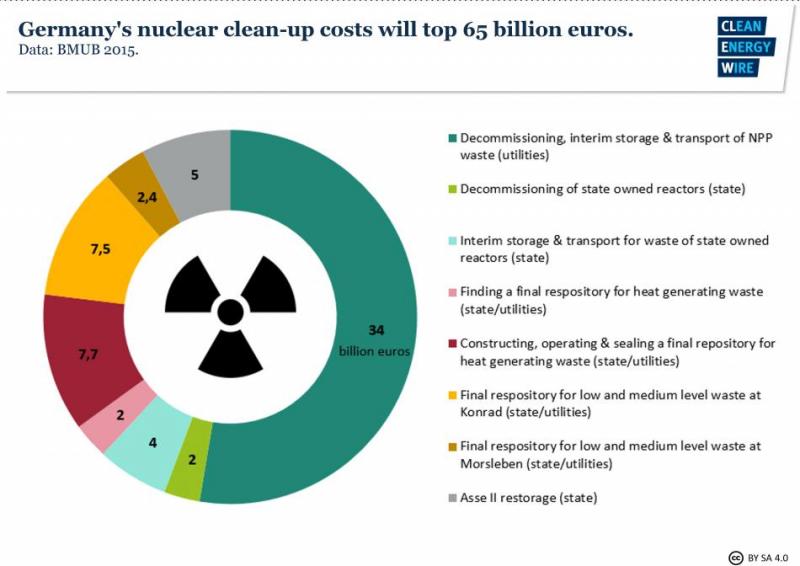 In early 2018, German industry contributed a highly anticipated landmark study to the debate about the costs and benefits associated with the Energiewende. The Federation of German Industries (BDI), the country’s most important industry association, has concluded that as long as Germany’s efforts to reduce emissions do not put energy-intensive businesses at a disadvantage on the global markets, “industrial companies will benefit from ambitious climate protection.” [For more details, read the article German industry says protecting climate can benefit economy and the dossier The energy transition’s effects on the economy.]

The BDI study – conducted by management advisers Boston Consulting Group (BCG) and the consultancy Prognos – says that cutting emissions by 80 percent by 2050 (the lower end of Germany's climate targets) - would require cumulative total investment of 1.5 trillion (1,500 billion) euros. The authors stress that this figure should not be construed as “cost”. “We are talking about investment, not additional cost,” according to BCG managing director Philipp Gerbert. He also says the study does not take into account the cost of inaction on climate change, such as adaptation costs. “Even without the external costs of climate change, we arrive at a slightly positive effect on the economy,” Gerbert says.

That 1.5 trillion euros figure translates into around 45 billion euros per year. Reducing emissions by 95 percent (the high end of Germany's 2050 climate targets) would require total investment of about 2.3 trillion euros, according to the BDI study.

A study conducted by the Energy Systems of the Future (ESYS) at the National Academy of Science and Engineering (Acatech) shows comparable results, arguing that a successful energy transition, including the decarbonisation of transport and heating, will require annual investment of between 30 and 60 billion euros – equivalent to between one and two percent of GDP – over the next three decades. Costs might be even higher if the conditions turn out to be less favourable, but could also be lowered by “setting up a smart framework,” such as a uniform CO2 price for all sources of emissions.

A 2016 study published by the Institute for Competition Economics (DICE) at Düsseldorf University for the Initiative Neue Soziale Marktwirtschaft (INSM), a business lobby group, also lamented that the Energiewende policies currently in force are not cost-efficient, and called for more market-based mechanisms. It also estimated that investment needs in the power sector alone would amount to 520 billion euros by 2025, with the renewables surcharge being the largest driver of costs by far.