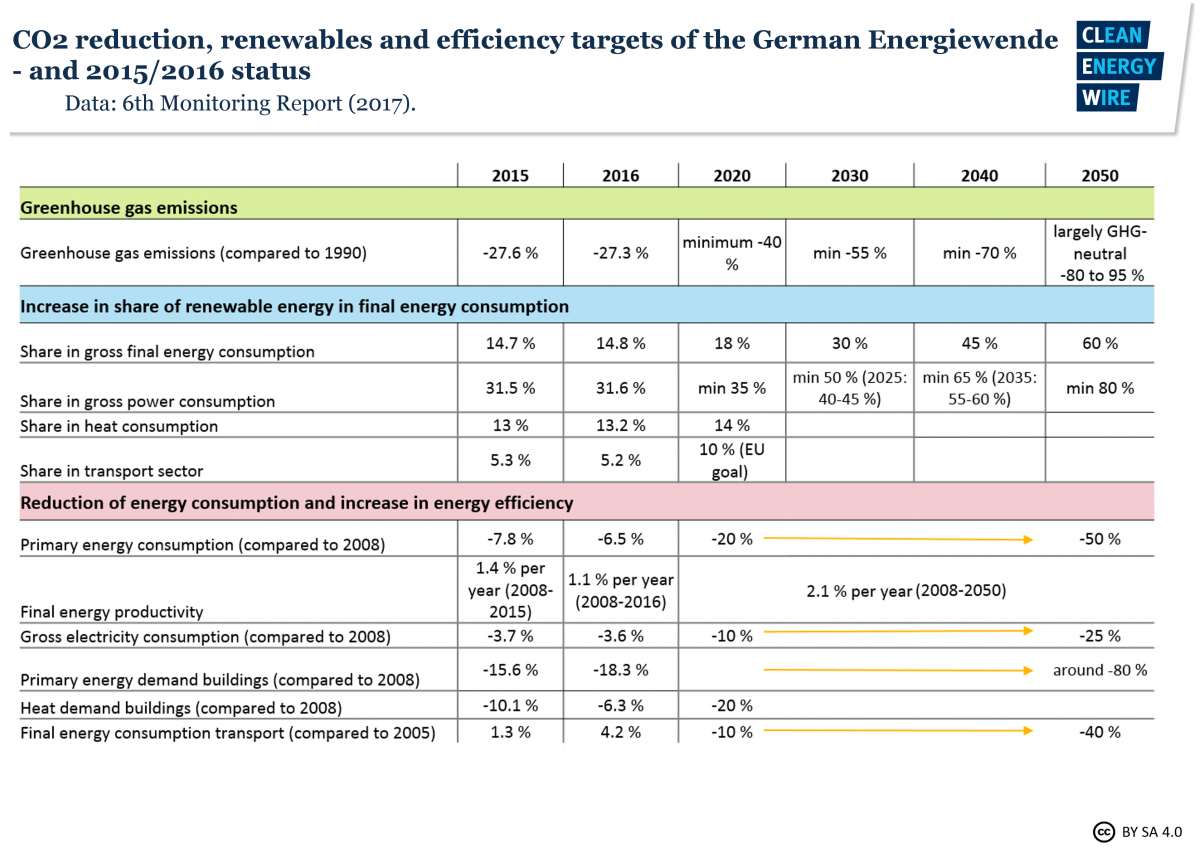 Germany will likely fail on many of its self-imposed energy transition targets, says the government-appointed expert commission tasked with monitoring the progress of the German Energiewende in its opinion on the federal economy ministry’s 6th Monitoring Report. Among the three elements of the government's so-called energy policy target triangle - supply security, affordability, environment and climate – the monitoring commission noted the biggest failure in addressing climate protection sufficiently. Energy transition policy must receive a higher political priority, Andreas Löschel, head of the expert commission, told the Clean Energy Wire. While overall support for Germany’s energy transition policy remains high, approval by those directly affected could be at risk.

Germany will likely miss several of its key energy transition goals, according to leading experts commissioned by the German economy ministry (BMWi) to monitor the progress of the country’s energy transition process.

The experts have already warned that the country risks considerably missing its 2020 greenhouse gas reduction goal, and now they look at the 2030 target. “With the current dynamics, reaching the 2030 target is likewise not possible,” the experts write. Emissions would have to be reduced three times as much between 2017 and 2030 as they were between 2000 and 2017.

In its non-binding advisory opinion on the ministry’s 6th Energiewende Monitoring Report, which was published on 27 June, the expert commission said that Germany also lags behind in lowering energy consumption, increasing energy efficiency, and expanding the power grid.

After a little more than 100 days in office, the coalition government faces sharp Energiewende criticism from the energy industry and environmental organisations, which call on the government to make progress on renewables expansion, emissions reduction and European climate targets. A crisis between Chancellor Merkel's CDU and its Bavarian sister party CSU has put important Energiewende policies on halt.

Germany’s energy transition from coal and nuclear power towards renewable sources - known as the Energiewende - has seen the share of wind, solar and bioenergy rise, but emissions reduction in Europe’s industrial powerhouse has stagnated during the past decade, leading the government to officially wave goodbye to its 2020 climate target and set up a task force to decide on a phase-out path for coal. 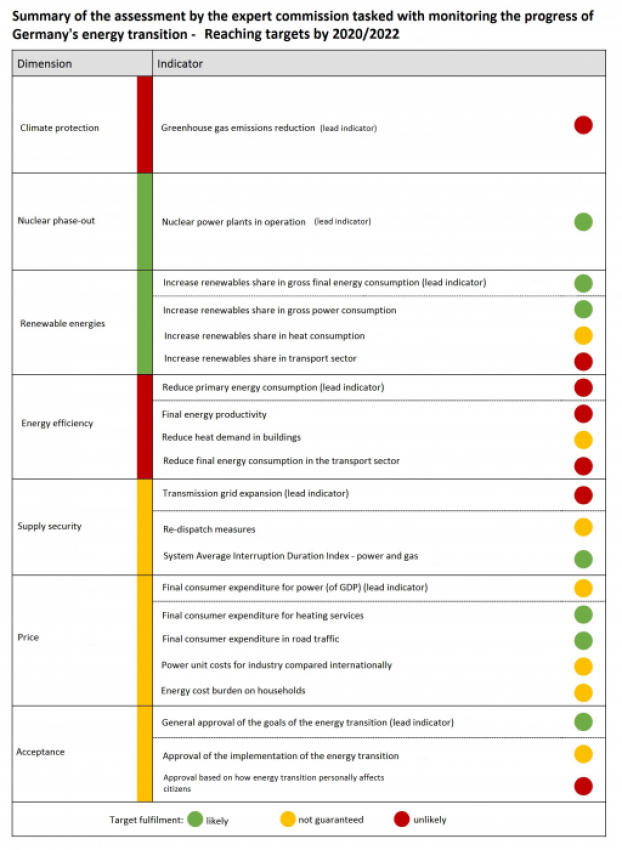 Energy transition policy needs higher political priority, Andreas Löschel, head of the expert commission, told the Clean Energy Wire. “If you look at the developments throughout the last year – we’re focusing on 2016-2017 in this report – it becomes clear that the energy transition does not have the same political importance today as it had a couple of years ago.” Löschel welcomed the new government coalition’s decision to set up the commission tasked with charting the path for the country’s exit from coal, and its plan to introduce a climate protection law.

However, the necessary instruments are still missing, and there has not been much progress in sectors such as transport and buildings, he said. “The government needs to initiate concrete measures, which are lacking for now.” A reform of the energy taxes and levies system, including the introduction of a price on CO₂, is necessary, but the more complex changes are still not being tackled, said Löschel, reiterating his call for a reform as laid out in the previous reports.

The energy pricing system should clearly be based on greenhouse gas emissions, which are the dominant driver of climate change, write the experts in their opinion. Currently, CO₂ price signals differ greatly across the sectors, with high price signals for electricity, compared to low price signals for oil and gas used for heating. Some energy prices include climate-related elements, for example the European Emissions Trading System (ETS) in electricity production, while others do not.

A price on carbon emissions could also have spared the new coal commission a lot of its work, said Löschel. “The exit from coal would happen driven by market forces, and the commission could concentrate on the regional policy aspects.”

Economy and energy minister Peter Altmaier (CDU), however, has recently said that there won't be any changes to the fees and taxes payable on heating energy and electricity during this term. Changing the levies on power and heat is a “poisoned” issue, Altmaier said. He said he hadn’t seen any convincing solutions yet, adding that the topic was not broached in the coalition treaty.

The government has tasked four independent academics with expertise in the fields of energy and economics with assessing the progress of the Energiewende project. In 2012, they released their first report, in which they took stock of the project and advised the government on policy measures aimed at reducing the country’s carbon emissions while simultaneously phasing out nuclear power production.

Due to the protracted coalition talks after the federal elections of September 2017, publication of the report was postponed until now, and the government decided not to release a more in-depth progress report with provisions on the Energiewende’s future. This will be published simultaneously with the 7th Monitoring Report. In November 2017, the experts published an interim report, calling for a CO₂ price and further action in the transport sector.

Since the current 6th Monitoring Report is still based on data from 2016 – even though several facts for 2017 are already available – the experts call on the government to follow up with the full progress report without delay “to close this gap quickly” and to come up with measures to avoid failure on the Energiewende’s key goals.

This year’s government assessment of the status quo is “remarkably frank,” Löschel told the Clean Energy Wire. In the previous report, for instance, the government had still left open whether Germany would reach its 2020 greenhouse gas reduction target. This year’s monitoring report is more realistic and manages to highlight the critical issues, said Löschel.

“Still, we pointed the finger on several areas, which is our job after all,” said Löschel. In the monitoring report itself, the German government positively highlights the high share of renewables in power consumption and the security of the country’s power supply.

According to the expert opinion, it is true that Germany is well on track to successfully phase out nuclear power and increase the share of renewables in power consumption to target levels. However, without “decisive progress” in grid expansion, the government endangers future renewables expansion and “risks critical situations regarding supply security,” the experts write. In the coming years, however, power imports could ensure security of supply in Germany.

They also say that the goal of increasing the intensity of competition in renewables auctions could not be reached in all areas. In the upcoming onshore wind power auctions, there might not be sufficient competition due to a lack of approved locations. This is an issue especially in light of the planned additional auctions as laid out in the coalition agreement.

Both the government and the expert commission single out transport, and say that considerable effort will be needed to reverse the current negative trend in the energy transition process. The share of renewables remains low, and final energy consumption in transport rose by 2.9 percent in 2016 compared to the previous year.

“It is to be expected that the 2020 target of reducing final energy consumption by 10 percent compared to 2005 will only be reached by 2030 under the current framework conditions,” writes the German government in its report. According to the experts, the gap towards reaching the 2020 target equalled the annual energy consumption of 10 to 11 million passenger cars in Germany. The measures laid out in the coalition agreement to tackle this and the issue of high CO₂ emissions are “very vague,” they said.

All previous monitoring reports and expert opinions have lamented little progress on energy efficiency, and this year is no exception. Raising final energy productivity and reducing primary energy consumption both fall short of Germany’s goals. “Energy productivity would have to be increased by a factor of four to reach the 2020 target,” write the experts.

In their view, such a development cannot be expected, as only private households show a reduction in final energy consumption, while it stagnates in industry and has even increased in transport.

This assessment contrasts with the new international ranking published by American Council for an Energy-Efficient Economy (ACEEE), in which Germany came first together with Italy for being the most energy efficient countries among the world’s 25 largest energy consumers.

Acceptance by those personally affected at risk

The share of final consumer expenditure on electricity fell slightly between 2015 and 2016, from 2.3 percent to 2.2 percent, as lower market prices balanced out an increase in taxes and levies. This could help secure the widespread acceptance of Germany’s energy transition among citizens, which has been high for years.

"We believe that public acceptance needs to become an important indicator for any meaningful Energiewende monitoring – especially since we haven’t even implemented the most controversial measures yet," Löschel told the Clean Energy Wire.

While overall public support for the Energiewende continues to be high, the expert commission says that approval by those who are directly affected by its implementation remains at risk. "The question is whether there will be support if people realise that the energy transition does not only produce winners and cannot be had free of charge," said Löschel.