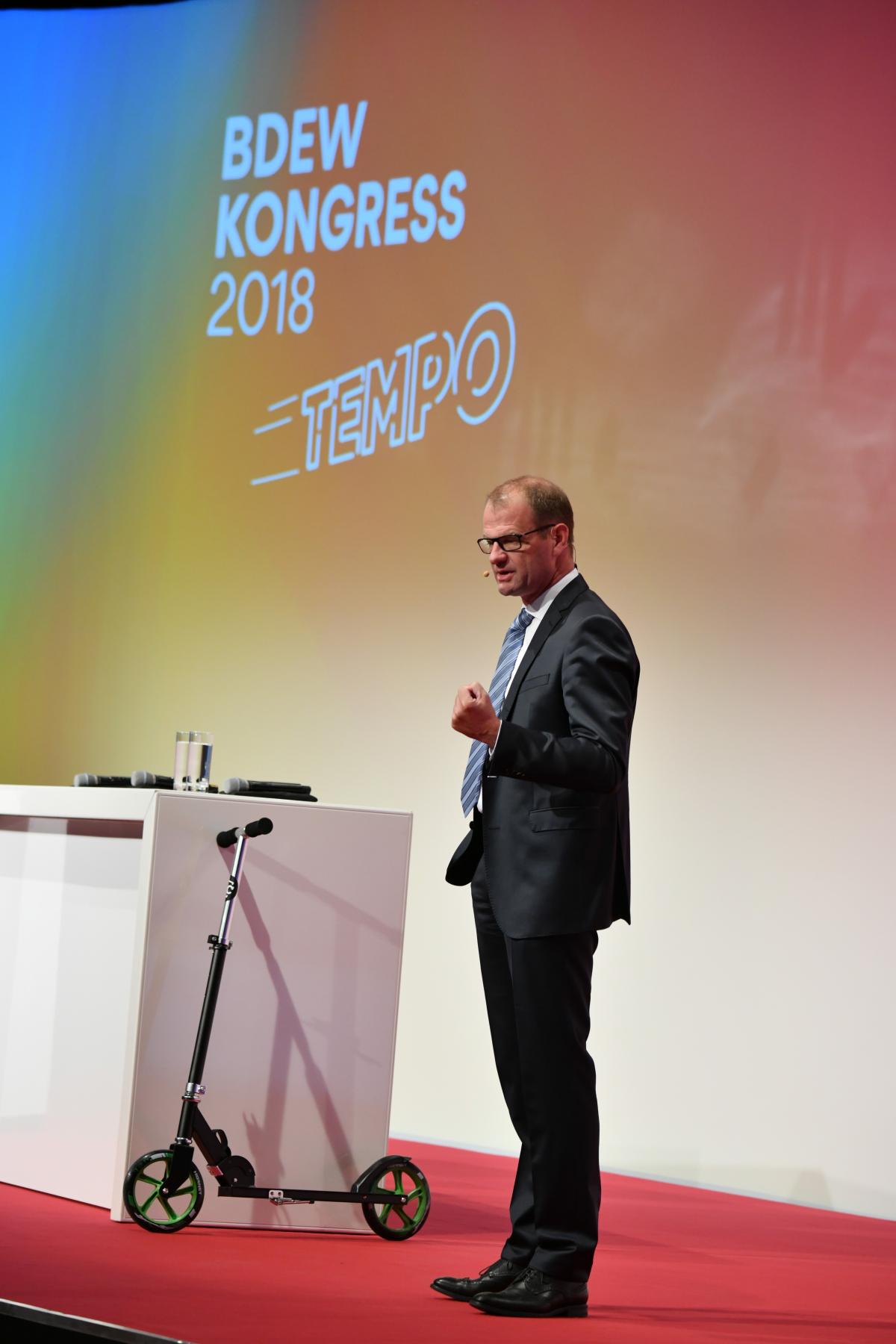 BDEW executive director Stefan Kapferer speaks at the BDEW congress 2018 in Berlin. Photo: BDEW
Germany’s policymakers have not kept pace with the energy industry’s rapid transformation caused by the Energiewende, and must catch up urgently, according to the utility association BDEW. The utilities also say that Germany needs a coal exit that is fast enough to reach its climate target for 2030. [UPDATE with comments by energy minister Altmaier]

The country’s government has fallen behind in the transformation in the energy industry triggered by the energy transition, and must now speed up its policy making processes to support the sector in reaching emissions reduction goals, the executive director of the utility association BDEW, Stefan Kapferer, told the group’s annual conference in Berlin.

“We are at a standstill, and we cannot afford this,” Kapferer said about Chancellor Angela Merkel’s new government. By now, industry, rather than the government, has become the main driver of the energy transition, including the exit from coal-fired power generation. “The industry has already entered the path of reducing its coal use, this process is well underway.” BDEW’s new president, Marie-Luise Wolff, told the Frankfurter Allgemeine Zeitung newspaper that the coal exit must not come too late for the country to reach its 2030 climate goals.

Energy minister Peter Altmaier mostly reiterated known government positions in his speech at the conference. The country had to step up the extension of power grids in order to speed up the roll-out of renewables as envisioned in the government coalition treaty, Altmaier said. Cabinet should pass a law to speed up grid extension after the summer recess. “The government stands by the 2030 climate target,” he said. “We haven’t given up on the 2020 target,” he said. “But there is a gap of 8 percentage points,” he said referring to the government’s latest climate protection report. “Anyone who looks into this seriously knows that you cannot close such a gap with the push of a button.”

Germany’s new coalition government has been under pressure since its decision to postpone the long-standing 2020 goal of reducing greenhouse gas emissions by 40 percent compared to 1990 levels. The coalition has also faced criticism for the delays in establishing a commission tasked with charting a path toward the country’s coal exit, and has further irked environmentalists by dragging its heels on more ambitious climate and renewable targets for the European Union.

Altmaier stressed that higher ambitions had to be underpinned with precise measures in order to ensure credibility. “The interesting thing is that the debate we had on Monday in Luxemburg was characterised by many saying: 'Let’s have higher goals but with a lower degree of reliability and a lower degree of measures,'” Altmaier said. [Find more details in the article Clear steps must underpin EU renewables goal - German energy minister]

BDEW head Kapferer urged energy minister Peter Altmaier, who was scheduled to address the conference later on 13 June, to speed up the renewables build-up, as well as the extension of the power grid, rather than continuing with the current spat between the two coalition parties about which of the two needs to go first. The industry also needs a more secure future for the combined heat and power plants, as well as rules on storage that would allow this key element of the Energiewende to play a more prominent role.

Finally, Kapferer reiterated the industry’s long held view that the country was heading into difficulties in terms of supply security in the 2020s, once the nuclear phaseout is completed and the coal exit gets under way. In his opinion, Germany should not just rely on backup capacity from other European countries, as many of its neighbours are also about to shut down their nuclear and coal-fired power plants. Kapferer said Germany would need new gas-fired power plants to provide backup to the fluctuating renewable energy sources, such as wind and solar. The discussion about fixes, which could include a capacity market for back-up power plants, needed to start early enough, he said.

Energy minister Altmaier defended the government’s decision to bet on a so-called energy only market without payments for power plants on stand-by. Any debate about supply security must not lead to the introduction of a capacity market through the backdoor, he said. The government’s goal to cut emissions by 55 percent by 2030 meant that about half of Germany’s coal-fired generation capacity had to shut down by that date. Altmaier acknowledged that the phase-out path to be determined by the coal commission would have to take the shut-down of the final nuclear power plant in 2022 into account. “We will need a pause for thought to see what this does to grid stability,” he said.

The head of the German Association of Local Utilities (VKU), Katherina Reiche, seconded Kapferer’s view on supply security, urging the government to move cautiously with the coal exit. “I can only warn against hoping that we will find a kilowatt hour of electricity somewhere in Europe in the case of a bottleneck. An industrialised country like Germany must be able to generate enough electricity for itself at every minute of the day, even in an extreme situation,” she told the business daily Handelsblatt. The guiding principle in determining the order in which coal power should be phased out must be the carbon intensity of the affected plants, which would rank combined heat and power plants further down in the list.