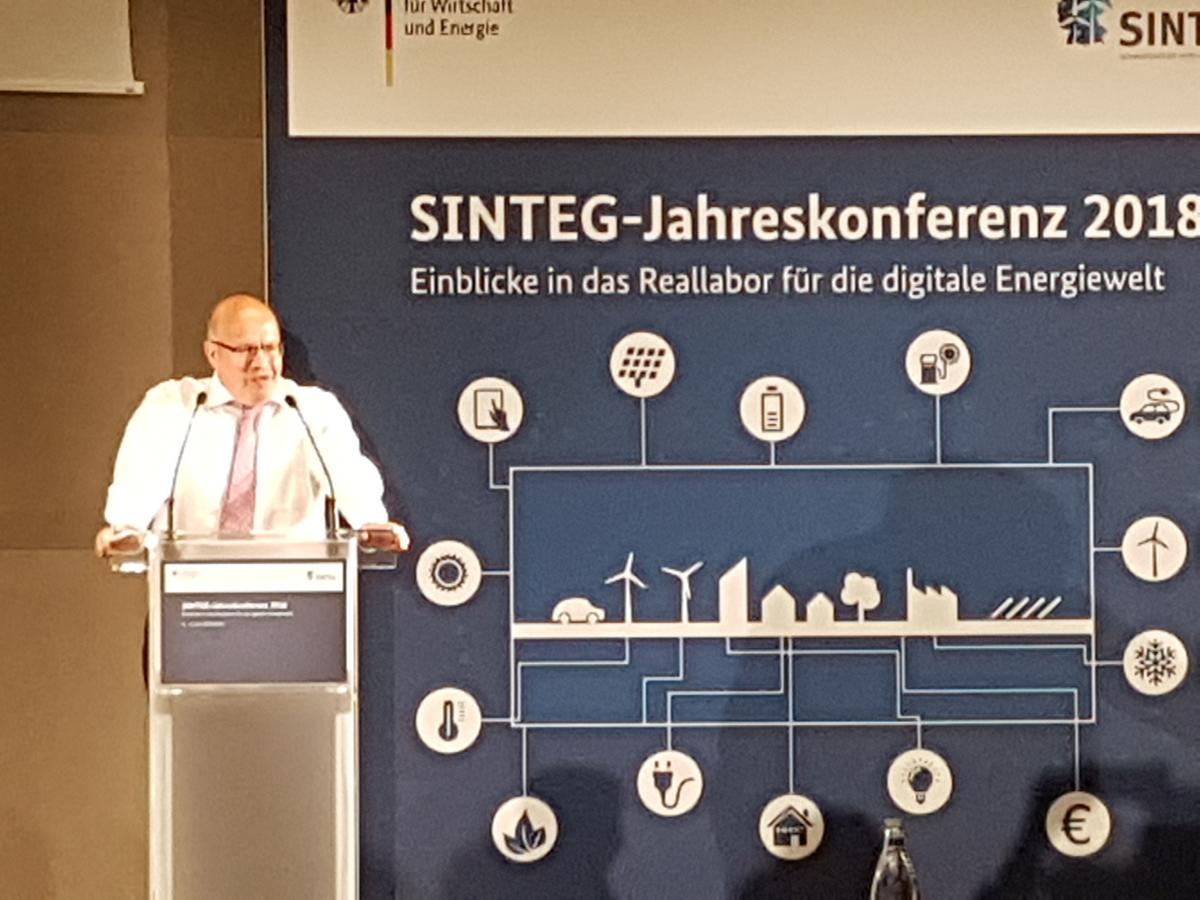 Energy and economy minister Peter Altmaier speaking at the annual SINTEG conference in Berlin. Photo: CLEW.
Germany's energy minister Peter Altmaier said there won't be any changes to fees on power and heat during his term, refuting the idea of a price for CO2 emissions floated by coalition partner SPD and the environment ministry. In an address delivered on the eve of the launch of Germany’s controversial coal phase-out commission, energy minister Peter Altmaier dwelt exclusively on energy and the economy – but he hardly mentioned coal. The policy agenda for his ministry will be driven by grid expansion-related issues and a priority task is to meet the country’s 2030 climate targets. [UPDATE: recast with focus on energy fees]

There will not be a focus on a change in fees and taxes payable on heating energy and electricity in this term as minister, Peter Altmaier, Minister for Energy and Economic Affairs said on Tuesday.

Changing the levies on power and heat was a “poisoned” issue, Altmaier (CDU) said. He hadn’t seen any solutions that convinced him and the topic was not included in the coalition treaty.

The idea to put a price on CO2 no matter where it was emitted, i.e. in the transport, heating, industry and power sectors has been repeatedly floated by environment minister Svenja Schulze (SPD), but Altmaier said this debate was "immaterial at the moment".

Germany wants to be a frontrunner in the field of energy transition because other countries don’t have the means to test such a serious transformation of their national economies, Altmaier said at the annual conference of the SINTEG project (Smart Energy Showcases - Digital Agenda for the Energy Transition), which is funded by his ministry.

“Of course, we are also doing the transformation for our own benefit, but obviously Germany won’t save the global climate on its own,” Altmaier said. Other countries would copy Germany’s transition if it still had a secure energy supply and a robust economy after the Energiewende (energy transition) is completed, he added.

“What Germany is doing resembles a large ‘living lab’,” Altmaier said. “You could say we are on our way to the moon, we are halfway there, and the spaceship is still secure, but we are not sure yet how to land and how to get back to Earth.”

Unfortunately, the hope that the energy transition could be a driver for digitalisation  in other areas, has yet to be turned into reality, Altmaier said.

In one of his first longer speeches dedicated exclusively to the energy transition, Altmaier listed the most pressing issues that he would tackle in the coming years. These include the grid expansion, shaping an integrated energy system (sector coupling), fulfilling the 2030 climate targets and making a coal exit as socially acceptable as possible for the concerned workers and regions.

He said he wanted to present a new law to accelerate the grid expansion, and renewed his promise that he would visit all the crucial power lines himself.

The energy transition had helped to bring energy businesses back to the rural areas, such as biogas plants on farms and wind turbines on fields. “But this also means that we now must build the necessary grid infrastructure to transport electricity to industrial centres,” Altmaier said.

In his opinion, German politics has got bogged down in fights over the costs and the implementation of renewables support in recent years. “My heart beats for a strong and sustainable national economy and for making the energy transition a success, while keeping all the good jobs we have today,” Altmaier said.

The minister is overlooking of the extremely controversial commission charged with setting an end date for coal-fired power generation in Germany, and his ministry is in disagreement with the SPD-led environment ministry over the inclusion of additional wind and solar auctions in a reformed renewables law.