The federal government continues to have reservations over a national price floor for carbon allowances, according to the government’s reply to a parliamentary question by the Green Party’s group in the Bundestag. In light of low CO₂ prices in the EU Emissions Trading Scheme (ETS), the Green Party asked about additional national measures to support European policies. The federal government rejected outright a national CO₂ price floor, but writes: “Discussions and proposals on a European level in relation to this are being followed and examined.”

Find the reply of the federal German government here.

For more information on the EU ETS find a CLEW factsheet here.

The German environment ministry is willing to consider additional reforms to strengthen the EU ETS, writes Ben Garside in Carbon Pulse. The chief spokesperson for the ministry said managing the quantity of certificates must remains the key principle of emissions trading, but that additional supply-side measures were a possibility. “That may clash with France’s idea for a carbon price corridor,” writes Garside.

The German economics and energy ministry has launched a new renewable research network for wind and solar energy. The platform aims to bring together actors from industry, research and politics to identify key future research projects to advance the Energiewende. The network’s key areas of focus are the reliability and costs of renewable energies, according to a press release.

Find the press release in German here and the website of the research network here.

Green Party nuclear policy spokesperson Sylvia Kotting-Uhl is pushing for the adoption of the planned nuclear follow-up liability law before E.ON’s shareholder meeting in June, reports Frankfurter Allgemeine Zeitung (FAZ). The Greens fear that E.ON’s spin-off of its fossil and nuclear power generation from its renewables division could result in reduced funds or liability for the nuclear clean-up.
Kotting-Uhl says adopting the law sooner could prevent “a billion-euro disaster for taxpayers” and ensure parent companies remain liable even if they spin off nuclear operations. Other legal experts see no time pressure. The federal cabinet made it clear in October last year that “parents are liable for their children”, meaning the big utilities cannot plead ignorance, according to the article.
Utilities are liable to pay for most of the costs of ridding Germany of its nuclear heritage. But given their economic troubles, there are questions over their ability to do so.

Daimler CEO Dieter Zetsche has prepared shareholders for a new era in mobility, reports Markus Fasse in Handelsblatt. Zetsche said Daimler will offer an e-car with a range of more than 500 kilometres “before the end of the decade,” and significantly increase its research budget and battery production, Fasse writes.

Find the CLEW dossier on the Energiewende in transport here.

The Green Party’s parliamentary group economic spokesperson, Dieter Janecek, says new petrol and diesel cars should be outlawed in 2025. “That’s technologically and economically feasible and absolutely necessary for climate protection,” Janecek told left-wing newspaper die tageszeitung. “Oil-rich Norway has set itself the goal to only allow new registrations of emission-free cars and vans from 2025. The Netherlands are discussing it intensively. And India thinks along the same lines.”

Craig Morris writes on energytransition.de, a website with links to the Green Party, that a long piece in Handelsblatt Global Edition on the negative consequences of the Energiewende is “unbalanced”, “unconvincing” and has “glaring gaps”. “It comes across as a strained attempt to find a cloud hidden behind a giant silver lining,” writes Morris.

Find the Handelsblatt article in the CLEW newsdigest here.

Rechargeable batteries that have been used in cars could provide 25 gigawatt hours (GWh) of electricity, as much power as half of all German pumped storage facilities in 2025, according to a study by the German Renewable Energy Federation (BEE). But for this plan to become reality, the German e-mobility market has to get into gear, according to a BEE press release. “The automobile sector can become a key factor of the Energiewende,” said BEE head Hermann Falk.

European power market development underlines the need for grid extensions, according to transmission grid operator TenneT. “The results of the market study show that we need a power grid that is capable of transporting the constantly increasing renewable power volumes,” said Tennet board chairman Urban Keussen in a press release. The share of onshore and offshore wind generation has increased to 44 percent of total renewable power fed into the grid - from 35 percent in 2014 - leading to a sharp increase in the need for balancing measures. 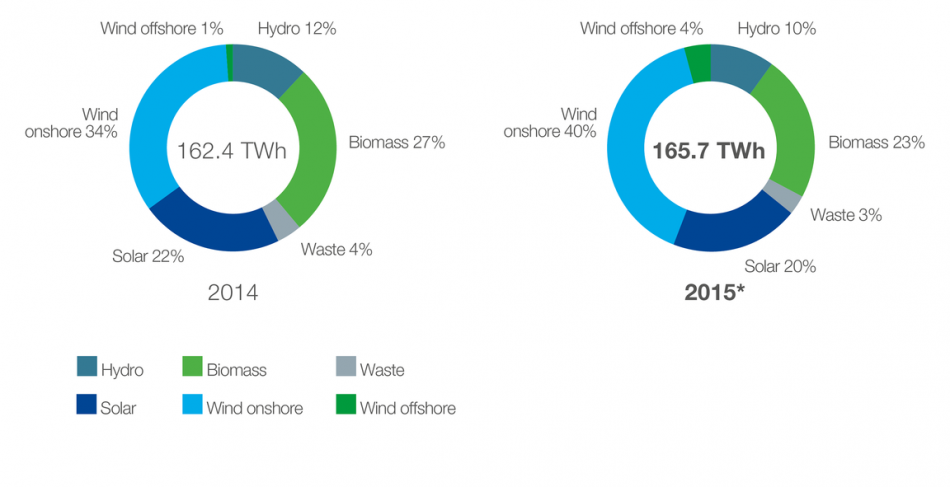