The extensive suspension of Germany’s industrial production in a bid to slow the spread of coronavirus will have a substantial impact on the country's energy consumption, industry association BDEW has said. Industrial customers account for between 40 and 45 percent of Germany’s electricity and natural gas consumption, but measures to contain the virus, collapsing supply chains, and withering demand at home and abroad are expected to lead to a sharp decline in power consumption and, by implication, of greenhouse gas emissions. In an analysis of the virus's effects on Germany's energy industry, BDEW noted that "a reduction in daily use slowly starts to emerge”. It added that year-on-year power demand remained stable until Wednesday 18 March but declined by 3.5 percent a day later, even though this may still be due to regular variation. A clear trend can only be confirmed once large-scale plant shutdowns in the automotive and basic materials industries take effect this week.

BDEW said the parent plant of carmaker Volkswagen in Wolfsburg alone consumed 960 million kilowatt hours (kWh) in 2017, meaning the company's announced production stops alone will leave a major mark on power demand. However, the association added that part of the industry's energy use is basic supply for heating, lighting and data processing, "meaning it is only partly contingent on production.” The energy industry lobby group also said that falling demand will likely cause a drop in wholesale power prices, with price projections for April ranging about 30 percent lower than one week ago. Likewise, lower power demand caused the EU's emissions trading price to drop from about €25 per tonne of CO2 at the beginning of the year to €15 last week. BDEW said the parallel increase in household power demand due to more people working from home would be negligible compared to the drop in industrial demand. Power consumption at internet data hubs and computing centres, however, could increase.

Internet hub operator DE-CIX said the average traffic data at the world's largest exchange in Frankfurt am Main increased by ten percent between 11 and 18 March. It also noted a 50 percent increase in traffic for video conferencing applications such as Skype or Zoom, a 25 percent increase in online and cloud gaming and a "significant increase" in the use of social media platforms.

The coronavirus is sharply slowing economic activity but it is still difficult to make detailed predictions for CO2 output due to the extremely wide range of current forecasts available. However, Germany may now well exceed the government's original 2020 target of a 40 percent emissions reduction compared to 1990. But the expected rebound after the recession and the economic stimulus measures risk driving emissions up again sharply. 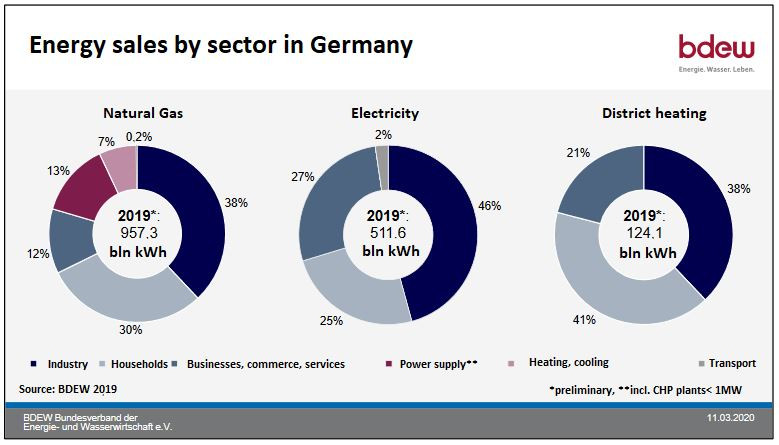