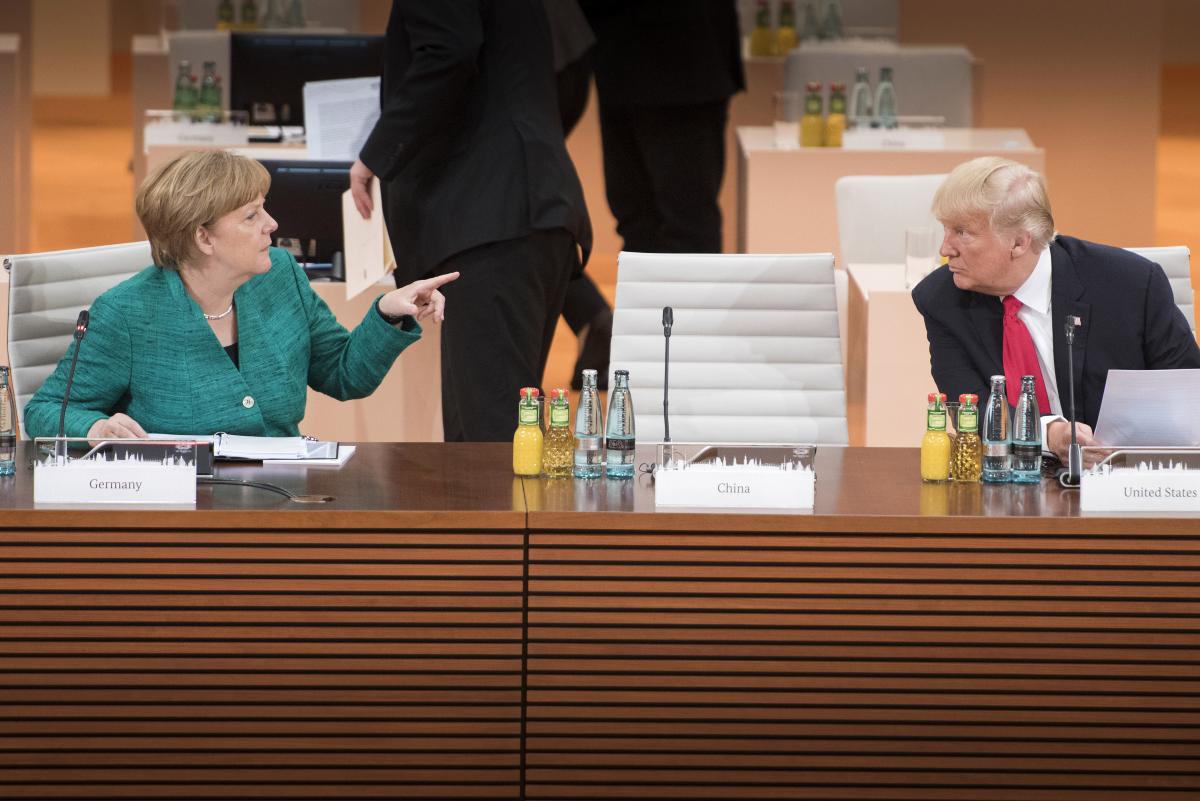 Merkel in conversation with Trump in Hamburg. Photo: German Government/Bergmann
Nineteen members of the G20 group of leading industrialised and emerging economies underscored their commitment to the Paris Climate Agreement, leaving the United States isolated. The US also was the only country to opt-out of a first-ever G20 action plan that outlines steps to implement the deal and drive a global energy transition. The climate issue was fought over hardest at the two-day summit in Hamburg, which was tarnished by violent clashes between police and rioters. [UPDATES Reactions by Turkey and France after the summit]

German Chancellor Angela Merkel said the summit clearly exposed the dissent between the United States and the other 19 members on climate protection, calling the US departure from the international consensus “regrettable”. Merkel said she was “glad” that all other countries stood firm in their commitment to the Paris accord signed by 195 countries in 2015.

The German Chancellor had made international climate protection a priority of her country’s G20 presidency, which had been challenged by US President Donald Trump’s announcement to leave the landmark agreement a month earlier.

Environmentalists and NGOs applauded Merkel for keeping the other 19 countries on board, though they criticised the lack of progress on concrete action to reduce carbon emissions. “The G20 summit sends the important signal that 19 members are unified in their support of the Paris climate agreement and want to advance the implementation,” said Jörn Kalinski, head of campaigns at Oxfam Germany. “That means Donald Trump is isolated."

While the final G20 communiqué takes note “of the decision of the United States of America to withdraw from the Paris Agreement”, it also says that “the other G20” members regard the Paris Agreement as “irreversible” and confirm their “strong commitment” to achieve its “swift implementation”.  The US, on the other hand, was going to “immediately cease the implementation of its current nationally-determined contribution” to the agreement’s goals, the final document says.

However, the communique also includes a joint declaration by all G20 members “to reduce greenhouse gas emissions”, promote energy efficiency and investments “into sustainable and clean energy technologies” in line with the UN’s 2030 Agenda for Sustainable Development. All members except the US accordingly endorsed the Climate and Energy Action Plan for Growth devised by the German presidency.

While common positions on other official summit topics, namely free trade, international finance and fighting terrorism had already been found, the dissent on climate remained right to the end. European nations as well as the BRICS group of powerful emerging economies including China, Russia and India, officially backed the Paris accord already before the final communique had been issued.

The contentious section had been debated intensively by negotiators right until the end of the summit, EU officials told news agency Reuters. Positions especially diverged over a paragraph requested by the US, saying the country was going to “work closely with other partners to help their access to and use of fossil fuels more cleanly and efficiently."

A phase out of coal and other fossil energy sources is widely regarded as a prerequisite for fulfilling the emissions reduction aims outlined in the Paris deal. In the end, the contested sentence was kept in the communique but Merkel stressed it was not supported by G20 members other than the US.

But fresh doubts about the commitment of the 19 supporters of the Paris Agreement surfaced right after the summit, when Turkish President Recep Tayyip Erdogan warned that his country might not ratify the global climate deal unless Turkey got the status of a developing country and received money to comply with the climate accord as promised by France when signing the deal in 2015.

However, Germany's environment minister Barbara Hendricks said the Turkish move was rather about "access to international financial mechanisms" than any deeper rejection of the Paris accord as such.

French President Emmanuel Macron said he still had hopes the US President might change his mind about the Paris deal, announcing that his country was going to host a special summit on 12 December. Macron said the planned meeting two years after the agreement was made was intended to "take further action on climate, notably on the financial front."

Germany had originally put forward an ambitious proposal for a first-ever joint climate and energy action plan, which had already been watered down in the process of the G20 negotiations.

The plan now includes making a commitment to global energy transition by 2050, devising long-term climate strategies, helping poorer nations to cope with climate change and quantifying how the Paris Agreement’s goals are going to be achieved domestically.

The decision of US president Donald Trump to take his country out of the Paris Agreement raised doubts whether such a plan could be agreed on at all at the G20 level.

With all but one of the group’s members endorsing the action plan and confirming their commitment to the Paris goals, a “domino effect” to backtrack from the agreement had been avoided in Hamburg, Greenpeace director Jennifer Morgan told the Clean Energy Wire. “It’s clear that all other countries want to move forward with Paris”, she said, adding that “the German presidency helped make that happen”.

However, Morgan said Germany could have made its commitment to climate protection more credible by announcing a clear time plan for exiting coal, the largest contributor to German greenhouse gas emissions. “We expected more,” she said.

Christoph Bals, head of environmental NGO Germanwatch, also said Germany needed to do more than just promoting climate protection internationally. “You can’t call for international decarbonisation and refuse to come up with a plan for exiting coal and miss your own goals at home”, he said. Also Germany’s transport sector, where emissions have remained essentially stagnant since 1990, had to be transformed rapidly, he argued.

Bals said it was a good sign that the US position had not been copied at the summit, an outcome that just a few weeks ago had been far from certain. He argues that the closed ranks of most G20 members improved the prospects for a successful UN climate conference in Bonn this November.

“The chances that the COP23 will produce a common rulebook have increased,” he said. What was important now is that all states – including Germany – outlined how they plan to implement the Paris goals. “Only half of the Trump-Test has been finished”, Bals said.