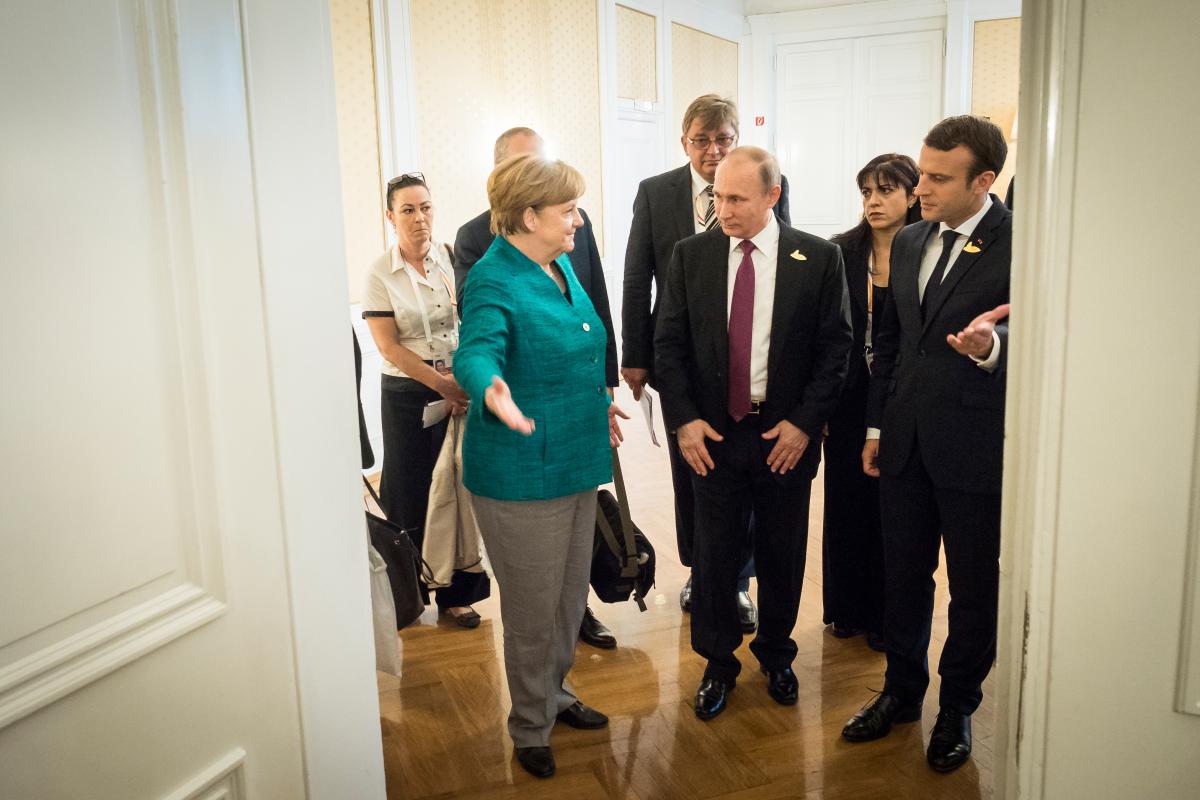 German Chancellor Merkel with Russian President Putin and French President Macron in Hamburg. Photo: German Government/Kugler
The German presidency and chancellor Angela Merkel pulled off a “solid” diplomatic success on climate policy by closing the ranks of all G20 members except the United States at the summit in Hamburg, experts for climate diplomacy said. Managing two days of difficult negotiations with leaders from the world’s leading economies, Merkel proved her credentials as a pragmatic mediator in international disputes. But whether Germany can now lead credibly on climate in the long-term depends now also on its own efforts to tackle stubbornly high emissions at home, the analysts said.

“This summit was not a routine event for Chancellor Merkel,” Susanne Dröge, senior fellow for Global Issues at the German Institute for International and Security Affairs (SWP), told the Clean Energy Wire. “Handling the Turkish, Russian and the US leaders at a time and keeping track of the different moves during the summit was demanding.”

Even US President Donald Trump, who was left isolated by the other G20 members in his rejection of the Paris climate deal, commended the German chancellor for her “fantastic job” at handling the summit. “It’s been really incredible, the way things have been handled, and nothing’s easy. […] You have been amazing and you have done a fantastic job.”

At the end of the two days, tarnished by violent clashes between police and protesters, the chancellor, who is standing for re-election in the September general election, presented the 19-1 solution on the Paris climate agreement in a communiqué approved by all of the world’s leading economies.

Given the uncertainty that had built up during its preparations, the Hamburg summit must be seen as a success, Dröge told Clean Energy Wire. “The overall legitimacy of the summit - with respect to its purpose - was at stake. The results show that there is at least some room left for finding common denominators. A G20 minus one result on the Paris Agreement support also shows that it is possible to reflect the political reality without fully compromising the will of others to act,” said Dröge.

The pressure on Germany to take global leadership on climate action had been constantly mounting since US President Trump decided to take his country out of the Paris climate agreement in early June. Climate policy experts agree that Trump’s decision pulled one of the most important players away from the global climate negotiating table and left a diplomatic void.

When Germany took over the G20 presidency from China in December, the Merkel administration had set out to make a strong statement on an implementation of the climate deal a cornerstone of its G20 presidency. The country wanted the G20 to sign-off to an ambitious climate and energy action plan. Yet Trump’s decision has led to fears that more countries might follow or weaken their commitment.

Now, the German government looks to have succeeded in closing the ranks of the remaining G20 members around the Paris climate agreement and the climate and energy action plan, the deal agreed by 195 nations in 2015. “We feared that other states than the US, especially Saudi Arabia, could join in questioning the Paris deal. This did not happen,” said Christoph Bals, policy director of environmental NGO Germanwatch.

Diplomatic success but no progress on climate

“Just a few weeks ago, many would not have thought that 19 out of the G20 members stand together to call the Paris Agreement irreversible and vow a quick implementation,” said Bals.

Germany’s finance minister Wolfgang Schäuble also saw rallying the remaining G19 behind the Paris deal in the Hamburg talks as proof that the summit was a success. The “unilateral decision by the US president will not in the least stop the global process; that everyone says ‘We’ll continue just like before, we must stand by Paris’,” said Schäuble.

On the longer run, the summit's outcome might look more sobering, John J. Kirton, co-director and founder of the G20 Research Group, told the Clean Energy Wire. “I would call it a summit of solid success, a B-minus-summit,” he said in reference to the A-F letter grading scale used at US or Canadian unversities.  The German presidency “certainly showed that the G20 could deliver strong successes on an expanding agenda,” on issues such as terrorism, nuclear proliferation from North Korea, women’s economic empowerment and health. But on climate change, trade and migration there was “very little progress apart from the procedural achievement of an almost completely consensual communiqué.”

“On climate change, some disasters were avoided,” said Kirton. But the communiqué was missing “real concrete actions to actually control climate change.” Merkel would “quickly be judged” by what the summit did and did not do on climate change. When the world saw more and more extreme weather events, “people will look back at all the good that Hamburg failed to do – to quote Miss Saigon – and wonder why the 19, who knew what they had to do, did not say ‘We note that Donald Trump is withdrawing from Paris and thus we will do more right here, right now,” said Kirton.

Under US president Trump, the US role in international relations has started to shift dramatically. With the United States increasingly focussed on domestic policy issues, multilateral initiatives have lost a key heavyweight supporter.

In the run-up to the summit in Hamburg, Merkel and her team of advisors and diplomats had worked hard on rallying international support. In a flurry of diplomatic efforts, Merkel won commitments for the multilateral climate deal from leaders such as China’s Premier Li Keqiang or Indian Prime Minister Narendra Modi.

While Germany already had some reputation for working intensively on all diplomatic channels, for example at the Paris Climate Conference in 2015, Merkel has so far avoided to accept the role of an international leader, often emphasising coordination with EU partners.

At a press conference after the summit, the German chancellor stressed the merits of international cooperation. “We’ve made clear in many points that we can achieve more, if we work together,” said Merkel. “It was in this vein that we led the discussions.”

Some international media have described Merkel’s approach as heralding the future of global diplomacy. “[..] for better or worse, others may increasingly emulate Berlin’s distinctive blend of idealistic multilateralism and case-by-case pragmatism,” the Economist’s Germany correspondent Jeremy Cliffe wrote in his blog. “Germany is less a leader than a foretaste.”

Political scientist Patricia Hogwood from Westminster University wrote before the G20 summit that the climate issue was an important test for Merkel’s success as an international leader. “If Merkel can bring climate control back on track, her international reputation will soar,” she predicted in an article on the science news and views blog The Conversation.

Germany’s got homework to do

For all the diplomatic merits, the Hamburg summit also highlighted Germany’s credibility problem on climate, many environmentalists have long been pointing out. Germany’s role had always rested on implementing climate protection approaches at home, but recent rising emissions endangered Germany’s credibility. The country also still produces a large share of its power from climate-harmful coal.

“Merkel, as G20 host, helped secure a united G19 outcome, but she must now lead the way at home and end Germany’s reliance on coal by committing to a socially just coal phase-out by 2030,” said Greenpeace International Executive Director Jennifer Morgan after the summit was concluded. “The Chancellor helped the G19 hold the line on the Paris Agreement. But we expected more, for instance announcing a plan for a coal exit by 2030.”

Energy economist Claudia Kemfert from the German Institute for Economic Research (DIW) also criticised Merkel for not driving the climate and energy transition agenda at home forcefully enough. The government had so far failed to decide a coal exit or any meaningful policy for reducing carbon emissions in the transport sector, Kemfert told TV station Phoenix in an interview. “There is obviously a large discrepancy between what you present on the world stage on one hand and what you do in your home country on the other,” she said. Such inconsistency opened the door for those on the international stage who wanted to slow the process.

*The Clean Energy Wire is a project funded by Stiftung Mercator and the European Climate Foundation.