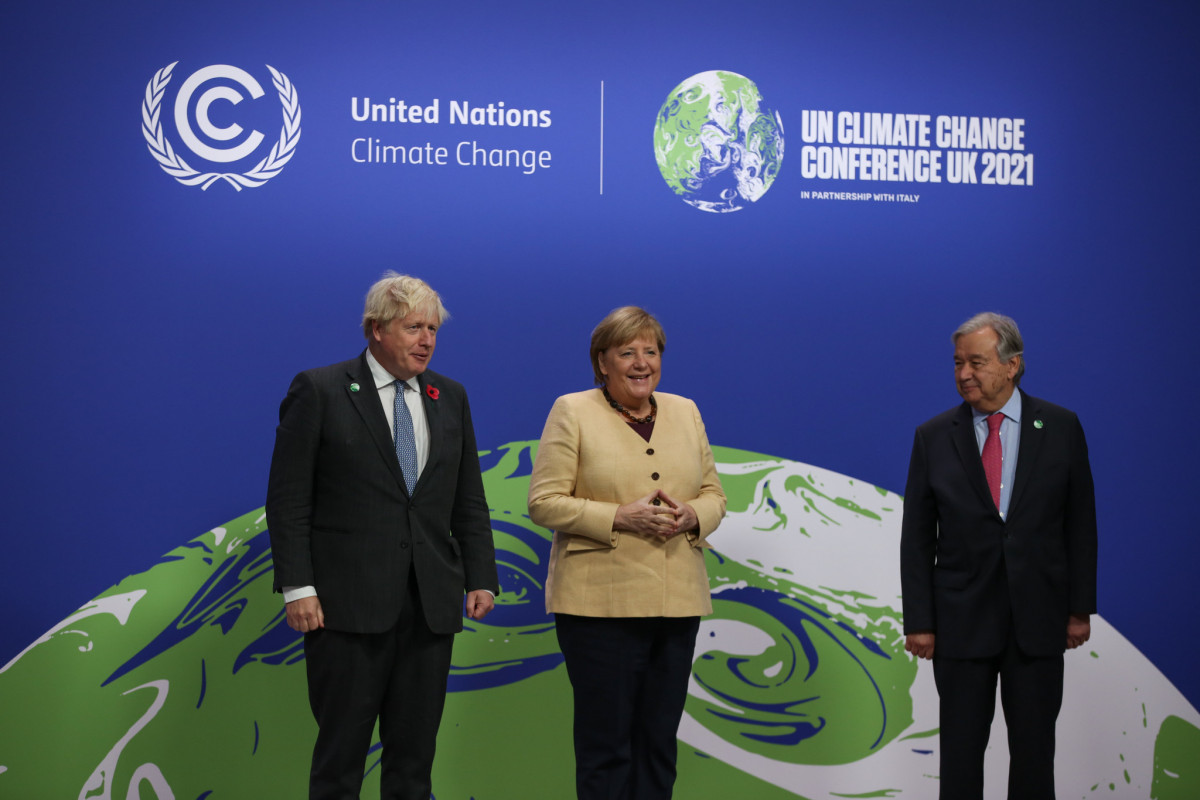 Taking her final bow on the world stage after 26 years of climate policy involvement, German Chancellor Angela Merkel said at the opening of COP26 in Glasgow that progress in emission reductions has been insufficient to achieve the necessary prevention of global warming. Naming partnerships to exit coal power use and making a plea for more CO2 pricing as a means to cut emissions, Merkel nevertheless expressed confidence that Germany and the world were on the right path, guided by the Paris Agreement, towards climate neutrality. Climate protection proponents, however, were quick to blast the outgoing chancellor’s speech and what they see as her failure to do more in reducing fossil fuel use over her 16 years in office.

Progress in reaching climate neutrality will not be achieved by state activities alone, German Chancellor Angela Merkel said in her speech at the opening of the 26th Conference of the Parties (COP) international climate negotiations in Glasgow, Scotland. “It’s about a comprehensive transformation of our life, work and economy. That is why I want to make a clear plea for the pricing of carbon emissions,” Merkel said on Monday, 1 November.

Attending the COP for her final time as German chancellor after being the first environment minister to chair it in 1995, Merkel looked back on her long career in government while assessing the progress the world has made over the past quarter century. Merkel said world leaders had made a large number of crucial decisions, most recently on Sunday (31 October) at the G20 summit in Rome when they agreed to stop international financing for coal power stations.

“Above all, we have the Paris Agreement of 2015 as our guiding marker,” Merkel said. She stressed, however, that the progress made was still insufficient. The national greenhouse gas reduction targets ("nationally determined contributions", or NDCs) do not add up to help achieving what was agreed to in Paris, she added.

Governments from across the world are descending on Glasgow for two weeks for the UN Climate Change Conference, where the UK presidency’s key objective is to keep the goal of limiting temperature increase to 1.5°C within reach. Official negotiations will focus on finalising the rulebook (implementation rules) of the 2015 Paris Climate Agreement, including technical specifications, the development of uniform measurements and how to more bindingly measure target achievements. At the same time, the conference leaves ample room for countries to round up political support for more ambition and make pledges on issues such as the coal exit and fossil fuel subsidies.

Despite the insufficient progress, Merkel expressed confidence. “We know that the effects of climate change are devastating. We must -- and I also say: we can -- implement the Paris Agreement, and not just in the course of this century, but, as we in the G20 have said, in the middle of this 21st century.”

Merkel also stressed the responsibility of the industrialised countries, Germany among them. “That is why we have tightened our climate targets again. We want to save 65 percent of our emissions by 2030 compared to 1990 and be climate neutral by 2045.”

Assisting developing countries in their energy transitions with climate finance is essential for the credibility of the industrialised countries, even if the crucial target is reached later than planned, she added. “We have to admit that we won't reach the 100 billion dollars in funding until 2023 -- belatedly, but at least we can do it. That is an important signal. We are making a considerable contribution on the German side and will increase this to 6 billion euros by 2025.”

COP26 measures are also bringing together broad international support for strengthening and protecting forests. “For me it is important that we stop forest loss globally by 2030. We have a successful partnership with Colombia, with which we work with Norway and the United Kingdom to help protect forests.

In South Africa, Germany is part of the Just Energy Transition Partnership, which aims to help the country’s own coal exit and serve as a pilot project for other African countries. The new partnership aims to provide additional funding for technological innovations, including green hydrogen, for South Africa, the German environment ministry (BMU) said on Tuesday, 2 November. A total of 8.5 billion US dollars is earmarked over the next five years, a large part of which will be in the form of loans. Germany is contributing just under 700 million euros to this. A successful coal phase-out in South Africa has the potential to become a blueprint for other regions, environment minister Svenja Schulze said in a press release. Key elements that Germany will support are cushioning the social and environmental impacts of structural change in the mining regions and improving the framework conditions for private investors to expand renewable energies.

Climate protection advocates panned Merkel’s speech and, in particular, the emphasis on CO2 pricing, saying it epitomised her government’s lack of action on reducing the use of fossil fuels during her 16 years in office.

“Angela Merkel's last major UN speech as chancellor underscores why Germany needs a fundamentally new climate policy,” said Greenpeace Germany climate expert Lisa Göldner. “With the CO2 price, the chancellor puts an instrument at the centre of her speech, with which the climate crisis cannot be resolved. The really necessary steps were not mentioned with a single word: the expansion of renewables and the phase-out of climate-damaging energy sources, such as coal, oil and gas - steps that her government deliberately delayed.”

NGO Germanwatch noted that Merkel’s final speech on the world stage increased the pressure on the incoming German government to succeed in terms of climate policy. "It is an irony of history that after 16 years of slow progress she is now placing such a clear call for action in front of the next government," said Germanwatch policy director Christoph Bals.

Once touted as the “climate chancellor”, Germany’s outgoing head of government held her last speech as chancellor at an international climate conference. Her climate leadership over her 16 years in office is now seen by many as middling. International observers commend her steadfast leadership in negotiations with other leaders, while critics speak of a “lost decade for climate action” at home. At COP26, Merkel’s role was that of a voice of ambition as she took to the stage early on in the negotiation process with other heads of state and government on 1-2 November at the World Leader’s Summit.

The 2020s are a critical decade for quick and ambitious climate action to keep alive the prospect of limiting global temperature rise to 1.5°C at most. The latest UN Environment Programme (UNEP) Emissions Gap Report found that current greenhouse gas emission reduction plans for 2030 by countries across the world fall well short of what would be necessary to meet the goal. The planet is on track for a temperature rise this century of at least 2.7°C, according to the report.

Some observers have said the German chancellor comes to Glasgow as a lame duck. She announced in 2018 that she would not seek re-election, and her party lost in the September national vote. Merkel’s official term ended with the inaugural meeting of the parliament on 26 October, but the government was asked by the German president to continue to carry out the official duties until a new administration is sworn in. German state secretary Jochen Flasbarth has insisted that “Germany is not in a lame duck situation” at the COP. The domestic climate policy differences between the key parties “vanish at the international level”, because they are not relevant, he said. The basic consensus on climate action within Germany has always been sufficient to make Germany a driver at international climate talks, said Flasbarth.