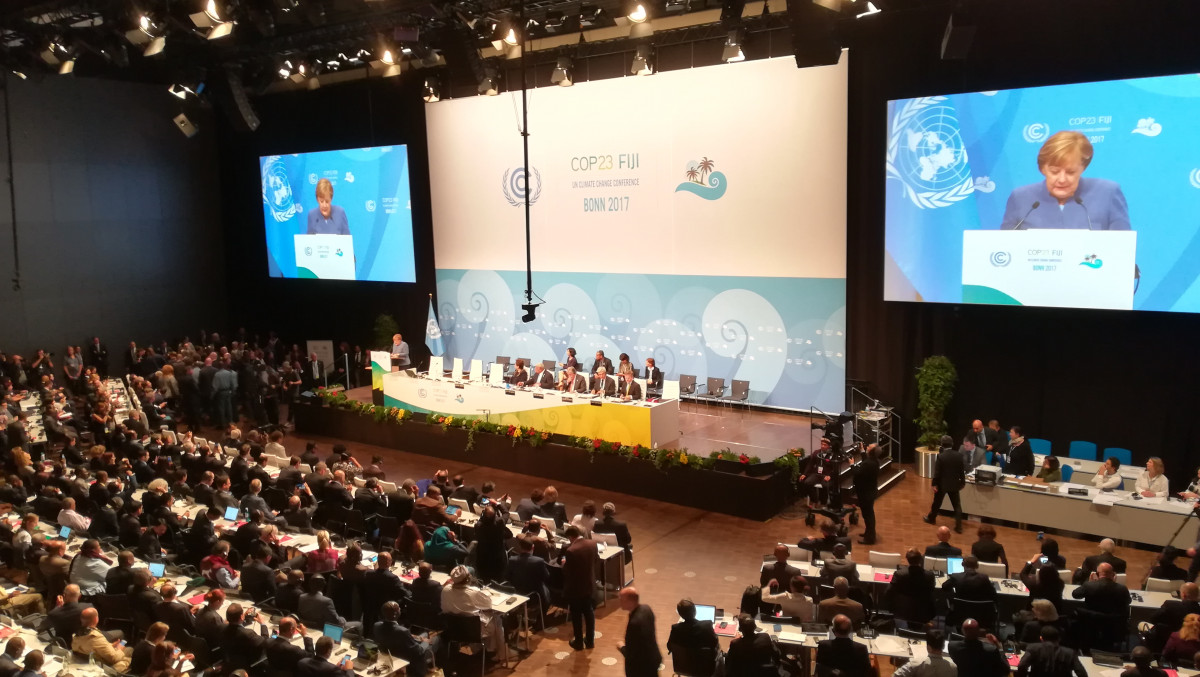 Governments from across the world will descend on Glasgow next week for the UN climate change conference COP26, with the UK presidency’s key objective as keeping the goal of limiting temperature increase to 1.5°C within reach. It is set to be the last climate summit for Chancellor Angela Merkel as German leader, who leaves the international climate stage having been a driving force at many meetings during her 16 years in office. Glasgow has to be “the kick-off signal for a decade of catching up on climate action”, says German state secretary Jochen Flasbarth. Despite the ongoing government coalition talks in Berlin, Flasbarth says that Germany’s climate negotiating team could not be seen as a lame duck delegation because domestic climate policy differences between the key German parties “vanish at the international level”.

For more on COP26, also read our stories:

Keeping the prospect of limiting the global temperature rise to 1.5°C alive will be the key objective at the upcoming UN climate change conference COP26, as Germany’s chancellor and long-time defining figure of international climate talks Angela Merkel leaves the stage after 16 years in office. Once touted as the “climate chancellor”, Germany’s outgoing head of government is set to hold her last speech as chancellor at an international climate conference, while at home in Berlin her political rivals are knee-deep in negotiations to form the country’s next government coalition.

Delayed a year due to the coronavirus pandemic, governments from across the world are set to meet at the COP in Glasgow, Scotland, for two weeks starting on 31 October. Aside from official negotiations to finalise the rulebook of the 2015 Paris Climate Agreement, the conference leaves ample room for countries to round up political support for more ambition and make pledges on issues such as the coal exit or fossil fuel subsidies.

“Glasgow has to be the kick-off signal for a decade of catching up on climate action,” said German state secretary Jochen Flasbarth at a press briefing in Berlin.

The 2020s are a critical decade for quick and ambitious climate action to keep alive the prospect of limiting global temperature rise to 1.5°C at most. The latest UN Environment Programme (UNEP) Emissions Gap Report found that current greenhouse gas emissions reduction plans for 2030 by countries across the world fall well short of what would be necessary to meet the goal. The planet is on track for a temperature rise this century of at least 2.7°C, said the report.

“To stand a chance of limiting global warming to 1.5°C, we have eight years to almost halve greenhouse gas emissions,” said Inger Andersen, executive director of UNEP, underlining the urgency and importance of the Glasgow talks. ”Eight years to make the plans, put in place the policies, implement them and ultimately deliver the cuts.”

With the 2015 Paris Climate Agreement, countries agreed to keep the global temperature increase "well below" 2°C and to try to limit it to 1.5°C. Research has shown, however, that the impacts of climate change are much more severe in a 2-degree world compared to a 1.5-degree world, prompting many governments – including the UK COP26 presidency – to make “keeping 1.5°C alive” Glasgow’s key objective. Germany’s Flasbarth went as far as calling it the “undisputed goal of the world community.”

By itself the conference will not solve the problem.

“From a physics point of view, 1.5° is still possible,” Stefan Rahmstorf, climatologist at the Potsdam Institute for Climate Impact Research (PIK), told Clean Energy Wire. “We have to hit the brakes fast enough and cut global emissions by half by 2030. That would put us on the right track.” However, summits such as COP26 have only limited impact, says Rahmstorf.

“These conferences are necessary and they serve a very useful purpose by putting a certain amount of public pressure on governments to put their cards on the table. However, by itself the conference will not solve the problem.” Governments have to commit to more emissions reductions, says Rahmstorf.

By that logic, Merkel’s impact at the conference will be limited. The European Union last year handed in its updated climate plan (Nationally Determined Contribution, or NDC) and Merkel’s government decided to raise Germany’s own targets following a landmark climate ruling by the constitutional court – and now aims to be climate neutral by 2045. Her climate leadership over her 16 years in office is now seen by many as middling. International observers commend her steadfast leadership in negotiations with other leaders, while critics speak of a “lost decade for climate action” at home.

At COP26, Merkel’s role will be as a voice of ambition when she takes to the stage early on with other heads of state and government on 1-2 November at the “World Leader’s Summit”.

“Chancellor Merkel has always managed to find the right words to stimulate the process,” said state secretary Flasbarth. “That’s the task the heads of state and government have in Glasgow.”

Some observers have said the chancellor comes to Glasgow as a lame duck. She had announced in 2018 that she would not seek re-election, and her party lost in the September national vote. Merkel’s official term ended with the inaugural meeting of the parliament on 26 October, but the government was asked by the German president to continue to carry out the official duties until a new administration is sworn in. 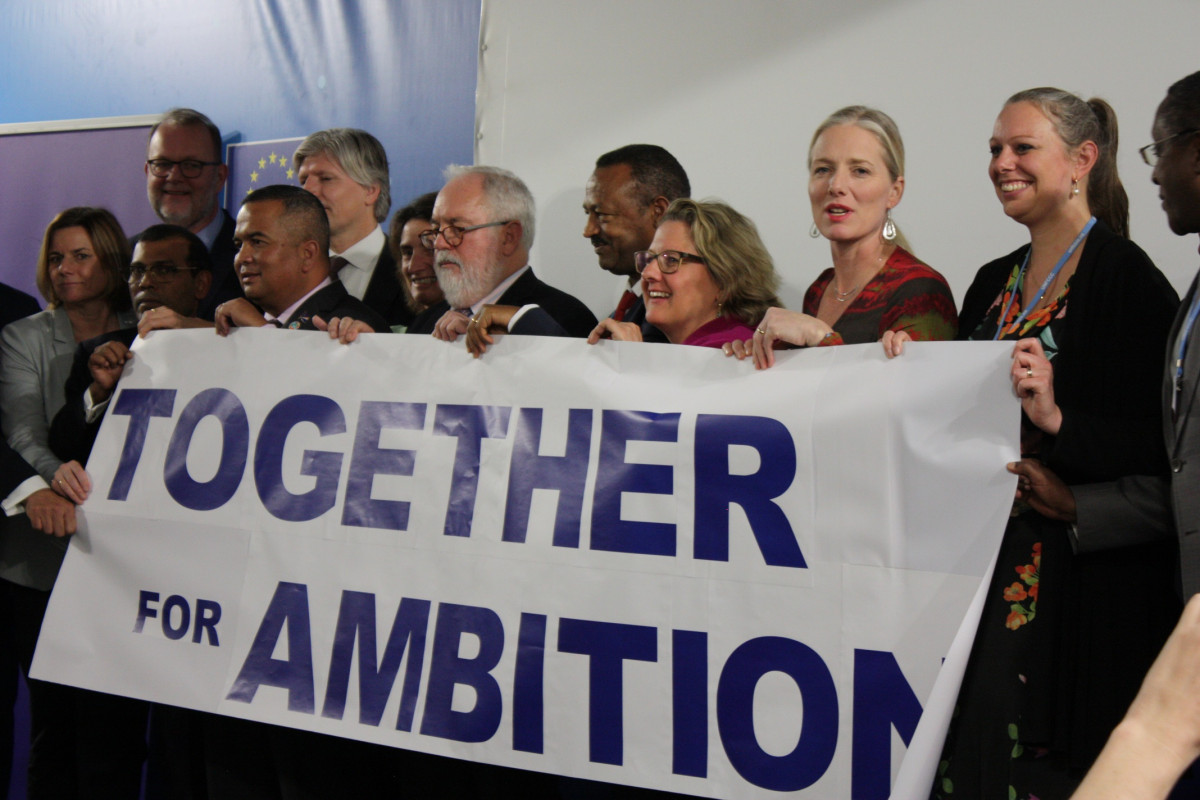 Raising ambition has been a key issue at UN climate change conferences over the past years. Photo: CLEW/Wettengel.

Election winner SPD with chancellor candidate Olaf Scholz, the Green Party, and the pro-business FDP have just started coalition negotiations, which means many in Germany focus inwards at the moment. Environment minister Svenja Schulze (SPD) is part of the coalition negotiating team and has thus cut short her visit to Glasgow.

Still, this won’t impact Germany’s delegation in Glasgow, said state secretary Flasbarth. “Germany is not in a lame duck situation here.” The domestic climate policy differences between the key parties “vanish at the international level”, because they are not relevant, he added. The basic consensus on climate action within Germany has always been sufficient to make Germany a driver at international climate talks, said Flasbarth.

COP26 is the first climate conference since governments were expected to submit more ambitious climate action plans - known as NDCs - for 2030. The pledges are the first test of the so-called “ratchet mechanism”, a cornerstone of the Paris Agreement designed to increase climate ambition over time. However, key countries such as China and India have not yet updated their NDCs, which makes “keeping 1.5°C alive” a lot harder.

Another key issue at the conference will be climate finance, a crucial issue for poorer countries. COP26 is not off to a great start here, either. Developed countries this week said they will deliver on their pledge to provide 100 billion US dollars per year in climate finance to support developing nations by 2023, three years later than originally planned. State secretary Flasbarth was instrumental in putting together a “climate finance delivery plan”, but it is uncertain whether this can fulfil its role as a “signal of trust” to developing nations.

The official negotiations will focus on completing the Paris Agreement rulebook, where the infamous article 6 is the key element. It provides for carbon credit trading between countries, enabling nations that overachieve their Paris goals to sell emission cuts to governments that have not reached their targets. But Article 6 also provides for a second mechanism, governed by a UN body, under which the public and private sector can trade emission reductions created anywhere in the world.

It is necessary to meet in person at the COP. I’ve been in situations where you needed to leave the room with someone who had a different opinion and just walk through the garden and try to get a consensus.

Other major issues at COP26 include scaling up adaptation, and loss and damage – crucial for the most vulnerable and poorest countries.

COP26 will be a special UN climate change conference. Over the years, COPs have evolved from government negotiating platforms into huge climate fairs – a networking opportunity for more than 25,000 participants, with delegates from almost 200 countries, observers from business, NGOs and science, and about 3,000 accredited media representatives.

Due to the coronavirus pandemic, it was unclear for a long time whether Glasgow could take place as an in-person meeting at all. Visa requirements and other vaccination and travel hurdles for delegates prompted some NGOs to call for the summit to be postponed.

“My advice to NGOs was always: this conference has to happen,” said Flasbarth. It is necessary to meet in person, he added. “I’ve been in situations where you needed to leave the room with someone who had a different opinion and just walk through the garden and try to get a consensus. Without that it’s impossible to make substantial progress.”

On 30-31 October, just as the COP kicks off, the leaders of the world’s largest developed and emerging economies, the Group of Twenty (G20), will meet in Rome. Together, the states are responsible for about three quarters of global greenhouse gas emissions and many see the meeting as a key event to signal ambition on climate action ahead of COP26 in Glasgow.

“The G20 is very important,” said Germany’s Flasbarth. In his view, the format – together with the G7 – has gained renewed significance on climate since the U.S. government has come back to the table as a driving force. Under former president Donald Trump, the United States had decided to leave the Paris Climate Agreement and hobbled climate policy decisions by the world’s major industrialised and emerging economies, leading to the infamous 19+1 agreements of recent summits.

However, sources told news agency Reuters that the governments of China, India and Russia are stepping on the brakes when it comes to a commitment to 1.5 degrees and the phase out of coal and other fossil fuels. One of the sources said breakthroughs were more likely in Glasgow than in Rome. News agency dpa writes that a draft final communiqué has the year 2050 as a climate neutrality target in brackets - a sign of ongoing discussions. A recent report by Climate Transparency showed that no G20 state has climate targets sufficient to help keep the global temperature increase to 1.5°C.

Deborah Cole reports for news agency AFP that according to government sources Merkel will include chancellor-in-waiting Olaf Scholz in her G20 Rome summit bilaterals including a sit-down with Joe Biden. This would constitute a "historic" move aimed at paving the way for a smooth transition of power in Berlin.

Germany’s next chancellor will have little time to transition into the new position, as the country takes over the presidency of the G7 in 2022. The UK this year positioned the G7 as an engine to keep 1.5° within reach, and the next government is almost sure to put a focus on climate change as well. The next chancellor will have to step up to the geopolitical plate quite quickly.

Merkel leaves work to do with mixed climate legacy