Merkel: Need to develop a certain passion and joy for the Energiewende 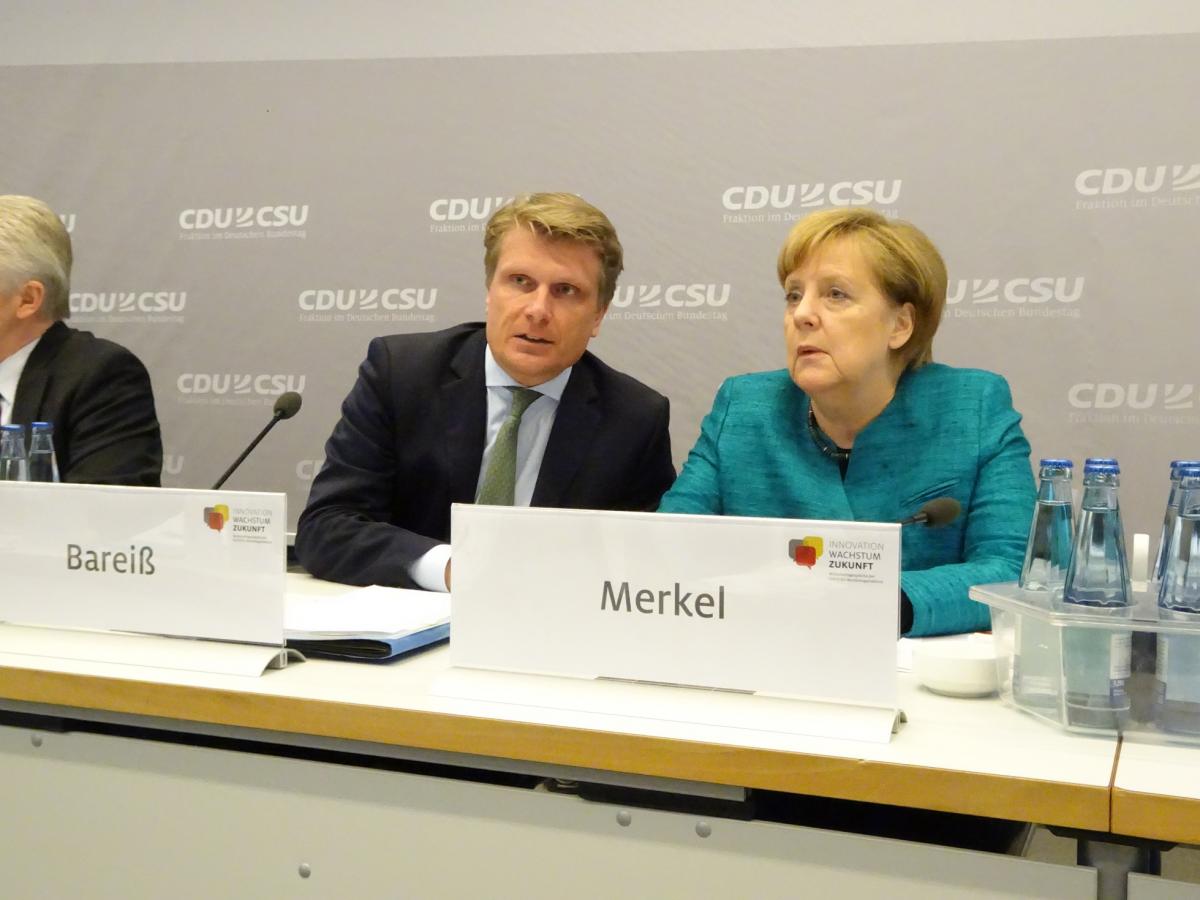 Thomas Bareiß and Angela Merkel at the 8th Energy Policy Dialogue by CDU/CSU Parliamentary Group in the German Bundestag. Source - CLEW 2017.
Chancellor Angela Merkel called on Germans to go beyond a rational take on the Energiewende and develop “a certain passion and joy” for the country’s generational project. Speaking at an event by her conservative CDU/CSU group in the federal parliament, she said the government needed to become faster in making new laws and permanently adjust its policy to the reality.

“I think we should look at the Energiewende in a rational way, and of course always take into account the basic economic possibilities. But we should also develop a certain passion and joy for it.” Not every generation had the opportunity to live through such technological upheavals. “And it’s beautiful to be a part of it,” said Merkel at the 8th Energy Policy Dialogue by CDU/CSU Parliamentary Group in the German Bundestag.

In light of fast and often sudden technological developments in the energy sector, the government needed to “act as a learning system”, as no one could predict for certain what would happen in the distant future. “On the one hand, that makes policy interesting and thrilling, but on the other hand we need to be willing to permanently adjust our policy to the reality,” said Merkel. There were no “laws for eternity” and the government needed to become faster in the legislative process that provides the “guard rails for all these big changes”.

Merkel’s comments come at a time when the country swings into election campaign mode. Voters will decide on a new parliament in the wind-farming pioneer state of Schleswig-Holstein, as well as in coal-rich North Rhine-Westphalia (NRW) in May. Then, in autumn, Germans will elect a new federal government. Security, economic stability and refugees are likely to dominate election campaigns, but keeping the Energiewende on a steady course and fulfilling Germany’s international climate obligations will still be major tasks for any new administration.

Green MP Oliver Krischer and CDU top-candidate in NRW, Armin Laschet, locked horns on Twitter on Monday over a CDU campaign poster saying “Just put your windmills directly in my garden! – We are fed up! We vote CDU”, to which the Green politician, who also hails from NRW, responded with a photo of a lignite excavator behind a house in reference to the state’s lignite mining area around the town of Garzweiler. The state of NRW is governed by a coalition of the Social Democrats (SPD) and the Green Party. They have cut back extension plans for the mines but the SPD has shied away from pushing for a coal exit in the traditional mining state. 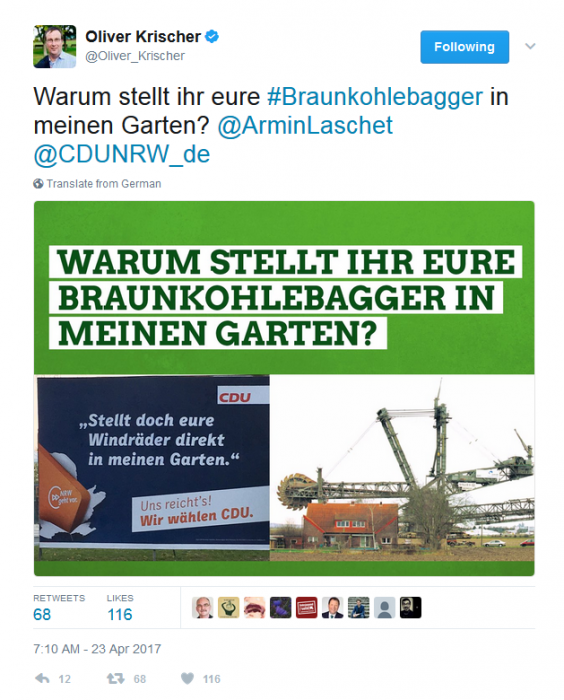 Merkel had shunned energy and climate topics at last year’s party conference, where she was re-elected party chair and chosen to lead her party in the 2017 federal election campaign. Back then, the CDU had laid the groundwork for the joint election campaign programme it is currently drafting with the Bavarian Christian Social Union (CSU). Over the coming weeks, party leadership representatives will discuss central campaign topics in town hall meetings across the country, while citizens and party members get to send in their programme proposals. Ultimately, the party leadership will decide the final programme in early summer, which could give hints about coalition options after the election.

Thomas Bareiß, energy policy representative of the CDU/CSU parliamentary group, told the Clean Energy Wire that Merkel’s latest comments on the Energiewende were not necessarily a signal for a possible coalition with the Green Party. “I wouldn’t read too much into this. The Chancellor has always been somebody who has promoted the energy transition.”

Asked about Merkel’s call for more passion for the energy transition, Bareiß said: “When talking about supply security and the costs, we often lose the pleasure and the inner drive for the Energiewende.” The CDU saw the transition as a central innovation and technology project, he added.

At the same conference, Prof. Robert Schlögl, director of Max-Planck Institute for Chemical Energy Conversion, said: “The Energiewende is beautiful.” Unfortunately, the government had got so far hung up on too many details and therefore needed a more systemic approach in the future.

Johannes Teyssen, CEO of utility E.ON said that the transition of the power system in Germany had to become a real energy transition, using power for transport and heating, and further distributing the cost of renewables expansion – “also onto the shoulders of oil, coal and natural gas”. Teyssen also said that he continued to hope for the repayment of the disputed nuclear fuel tax. E.ON would use the money for the decommissioning of nuclear power plants and phasing out nuclear power.

Heinrich Hiesinger, CEO of German steel producer thyssenkrupp AG, said that climate policy in the past had “dominated” the discussion and industry policy ”could only do damage control”. He called for a more balanced approach that still supported Germany’s climate targets, while taking into account economic needs and helping German companies stay competitive.