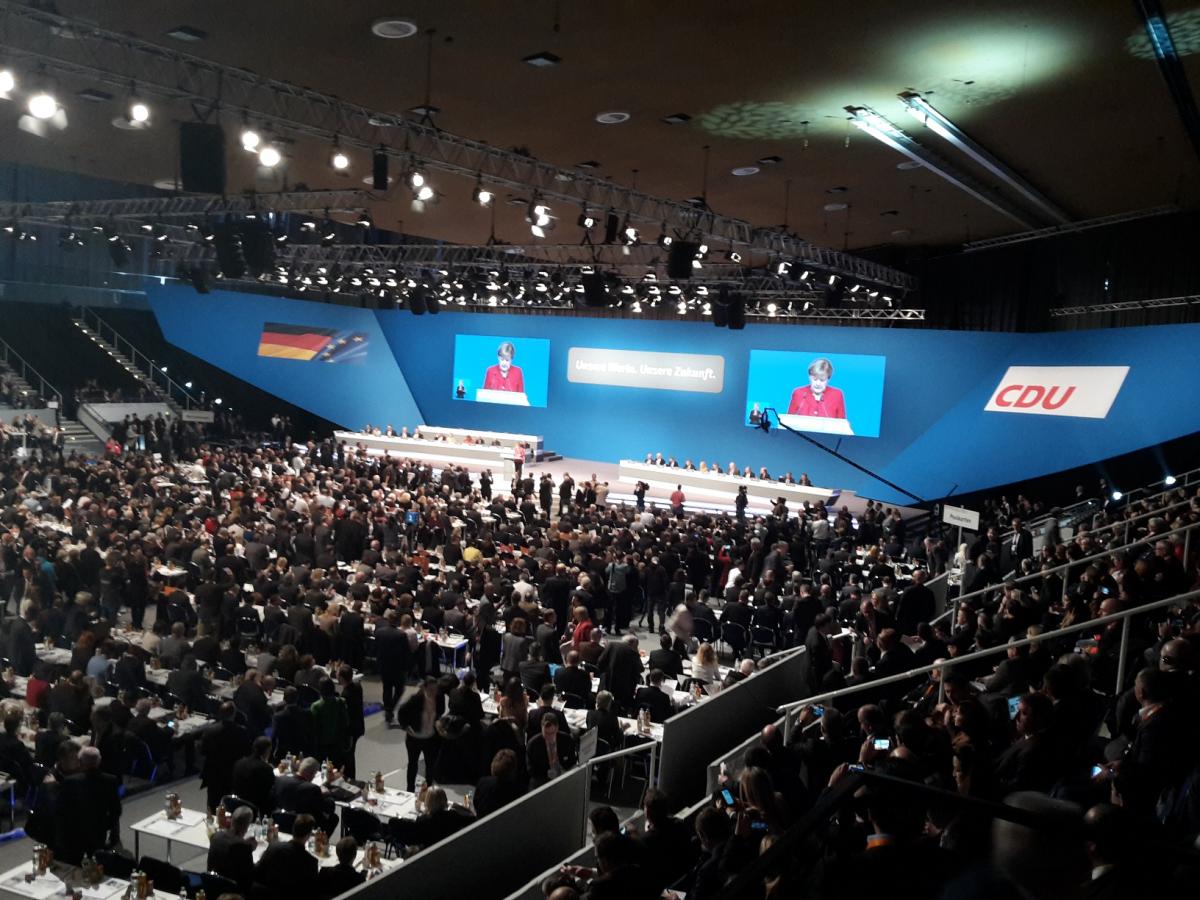 CDU federal party conference in Essen, December 2016.
Chancellor Angela Merkel and her party left energy and climate policy on the sidelines at the Christian Democratic Union’s (CDU) conference in Essen. The centre-right party laid the groundwork on Tuesday for its 2017 federal election campaign programme. In her speech, Merkel made no mention of the Energiewende, Germany’s generational energy transition project, and just a few motions included references to the country’s future energy supply, mostly calling for cost control and more a market-based approach. Merkel was re-elected as chair and will lead her party in the 2017 campaign. [Updates vote on main motion, comments from CDU MP]

Chancellor Angela Merkel's speech at the CDU conference was dominated by migration and global challenges in a “weaker and less stable world”, which she stressed her party would need to find answers to in its electoral programme.

She said the party would be “guided by three constants”: focusing on a strong and competitive economy; following fundamental values such as tolerance, fairness and freedom; and safeguarding law, order and security, she told the delegates.

Energy and climate policy played no role in Merkel’s 80-minute speech, which mentioned climate only once: “In the future, we want Germany to stay a country that takes on responsibility in the international fight against hunger, illnesses and climate change.”

At the federal party conference in Essen, the CDU met to agree on basic party policy, elect the party leadership, laying the groundwork for an election campaign programme which it will agree on together with its Bavarian sister party, the Christian Social Union (CSU), in spring.

MP and CDU energy expert Thomas Bareiß told the Clean Energy Wire that the lack of energy policy debate at the conference was largely due to other, more prominent issues. "Citizens have other worries, such as domestic security and migration. These are the topics that Chancellor Merkel emphasised in her speech," he said. In addition, the country was making good progress with the Energiewende project. "We have a few open questions, such as energy security, economic viability, costs or grid expansion," he said. "But we’re well on track with the Energiewende."

Speakers at the conference made clear that a central goal of the CDU will be to prevent a possible goverment coalition of Social Democrats, Greens and the Left Party in 2017. Together, these three parties poll at 40-45 percent, CDU/CSU at about 35 percent. Right-wing newcomer Alternative for Germany (AfD), currently at about 12 percent, could be an important factor in the federal balance of power.

The CDU party conference comes shortly after the Green Party signalled at their convention that an exit from coal-fired power and an end-date for conventional combustion engines in cars would feature prominently in their campaign.

The party delegates approved the CDU's federal executive board's main motion, with the title “Guidance in Difficult Times – For a Successful Germany and Europe”.  The motion states that the Energiewende can only be a role model for other countries as long as it does not threaten the competitiveness of the German economy.

In the future, the CDU will focus on innovative technologies and digital aspects of the energy transition and continue to demand that other countries play their part in protecting the world’s climate and environment, the motion says.

The conference passed a motion by the social wing of the CDU – the Christian Democratic Employees’ Association (CDA) – emphasising the economic aspects of the energy transition and saying costs must be capped. If ultimately agreed on with the CSU, the motion would commit the party to preventing further rises to the Renewable Energy Act (EEG) surcharge that consumers pay with their power bills to fund the development of renewable power, which should only happen where economically viable.

The approved motion also rejected an "arbitrary" ban of combustion engines at a set date. "The CDU will not allow the automobile industry and thus numerous jobs to be endangered by ideologically motivated guidelines,” the motion said.

The CDA also called for an impact assessment of Germany’s job market development before new environmental standards are introduced, as reported in Die Welt before the beginning of the conference. CDA argued that this "job-check" was necessary to assess the influence of decarbonisation and environment protection on employment. A majority of delegates present at the conference rejected this provision, arguing it would be too bureaucratic.

At the conference, Carsten Linnemann, an MP who chairs an influential group of small and medium-sized businesses within the CDU, told the Clean Energy Wire the Renewable Energy Act (EEG) needed a complete overhaul and market-oriented structures. The financial support of renewables should be degressive rather than a fixed amount over 20 years, he said. The support should also be linked to the extension of the power grid and development of storage.

In the run-up to the conference, German weekly Der Spiegel had reported on a motion calling for the end of Renewable Energy Act support by the end of the coming legislature. However, this motion was not tabled in Essen.

Chancellor Merkel will lead the CDU party in the election for the German Bundestag (parliament) in 2017. Despite criticism of her immigration and refugee policy decisions, delegates re-elected the conservatives’ long-time leader as party chair with 89.5 percent of valid votes, the second lowest share since she was first elected in 2000. In 2014, Merkel received 96.7 percent of the votes. In 2012, she was re-elected with a record 97.9 percent of valid votes.