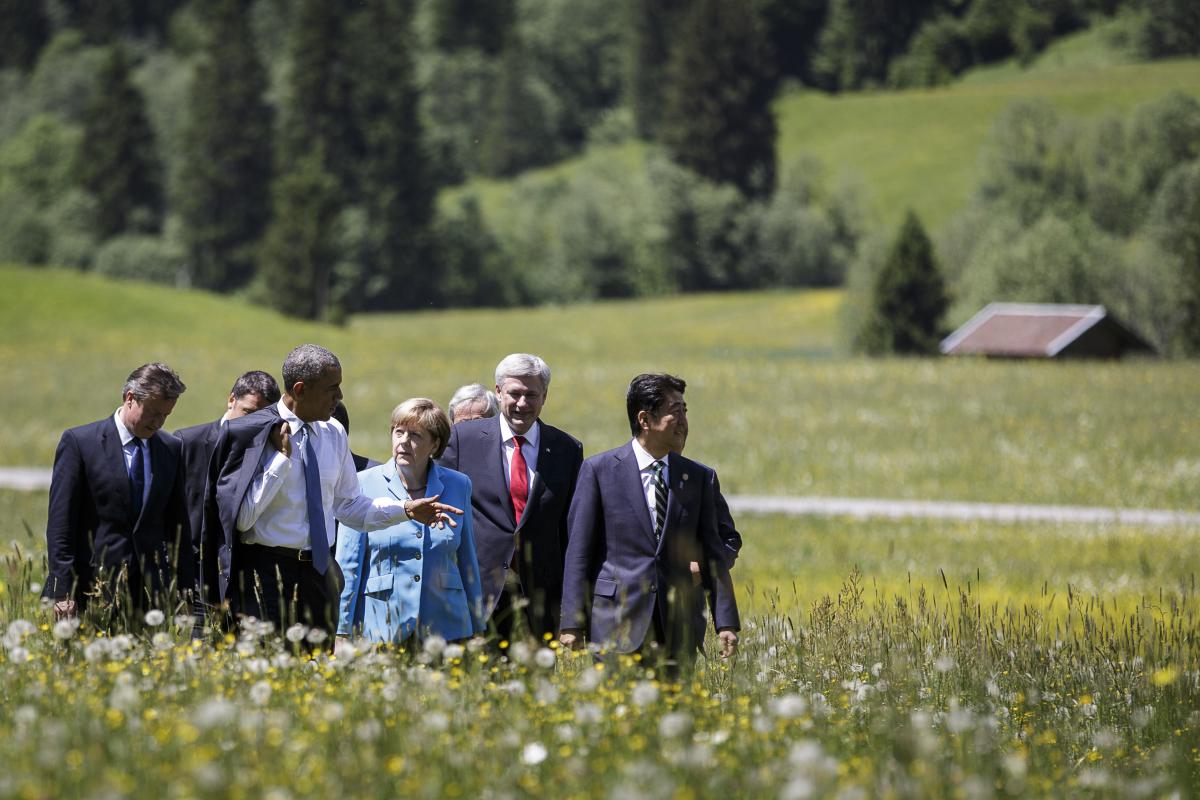 German Chancellor Angela Merkel and the G7 heads of state and government meet in Bavaria to talk about the world economy and about climate change. Photo: Bundesregierung/Denzel.
UPDATE (7 June 2015) -- All eyes are on Germany and Chancellor Angela Merkel during the G7 summit this weekend. Recent statements including her weekly podcast indicate Merkel intends to do justice to her former reputation as "climate chancellor", by putting climate and energy policy at the centre of talks in rural Bavaria's Elmau on 7-8 June. She has said G7 countries ought to lead the way into a world of low-carbon economies ahead of the December UN climate conference in Paris, both by committing to emissions cuts and by pledging financial assistance to poorer countries' mitigation and adaptation efforts. But critics point out that Germany’s own Energiewende has lost international appeal because of stagnating CO2 emissions and in-fighting about how to curb emissions from the coal sector. The Clean Energy Wire provides an overview of stories in the run-up to the G7 summit, as well as sources and experts on climate and energy useful for journalists covering the event.

The summit in Elmau will be the second time Merkel hosts a G7 (formerly G8 with Russia) summit in Germany, after welcoming heads of state and government in Heiligendamm on the Baltic Sea coast in 2007.

Merkel was Germany’s Minister for Environment between 1994 and 1998. During that time, she was in charge of 1997 negotiations for the Kyoto Protocol, the first and only binding international climate protection treaty to date. In 2007, the German press dubbed her the “Klimakanzlerin” (climate chancellor) because she led the EU to adopt emissions reduction targets and persuaded G8 leaders to accept the science of the Intergovernmental Panel on Climate Change (IPCC) and agree to the necessity of binding CO2 reduction targets.

After efforts to secure such a treaty at the UN climate conference in Copenhagen failed in 2009, Merkel insisted a new climate agreement should be the aim of following summits. Paris is the next opportunity to reach an agreement and Merkel has made it clear in the run-up to the G7 that she considers climate protection and the transformation to a low carbon economy one of the most important topics in Elmau.

At the Petersberg Climate Dialogue in May, Merkel said Germany would double its contribution to international climate financing by 2020. In 2009, industrialised nations agreed to mobilise a total of $100 billion US dollars (87 billion euros) per year by 2020 to help developing countries  mitigate climate change and adapt to its effects. “We are aware that the industrialised nations as a whole will have to do more if we are to honour the pledge," Angela Merkel said with regard to other G7 members. However, members of her delegation don’t expect other countries to follow suit in Elmau.

Just before the beginning of the G7, Merkel stressed the role of the leading industrialised countries.

“I think, we should look towards the year 2050 in Elmau and commit to an ambitious CO2 reduction. A commitment to the two-degree goal is the least,” she told the annual conference of the German Council for Sustainable Development according to the German version of her speech text.

In her weekly podcast Merkel reiterated her view that committing to the two-degree goal was key for the climate talks in Paris. "Otherwise I don't think there will be a climate agreement in Paris and all of the participants know that. That's why I hope that we, as the G7 countries, can clearly say: we stand by this goal," she said.

19 May 2015 | German Chancellor Angela Merkel and French President Francois Hollande have thrown their weight behind an ambitious and urgent push to make the Paris climate summit a success. The international community must start work now in order to reach a clear, ambitious and binding commitment to limit climate change at year’s end, the German and French leaders said at the sixth Petersberg Climate Dialogue, which aimed to prepare the ground for an agreement in Paris. Read more >

Merkel: G7 ought to pioneer transition to low-carbon economy

03 June 2015 | Climate protection is a large global challenge, German Chancellor Angela Merkel writes in an op-ed for several European newspapers, including the Frankfurter Allgemeine Zeitung and The Times. And it will be one of the main topics at the G7 summit in Germany this weekend. The UN climate conference in Paris for the first time in years brings hope that all nations, including emerging economies, will commit to reducing greenhouse gas emissions. “This would take us closer to our goal of limiting the increase in global temperature to two degrees – which all the experts say is the only way to keep it within reasonable parameters,” Merkel writes. “The G7 ought to be a model for the necessary transition to a low-­carbon economy,” Merkel continues, adding that all industrialised nations should stick to their 2009 pledge to provide $100 billion annually for adaptation and mitigation of climate change in developing countries as of 2020. Read the op-ed in English here.

04 June 2015 | G7 countries hope to present their vision of a long-term target for climate protection at their upcoming summit in Germany, according to a German official. Industrialised nations could also make pledges to decarbonise their economies, but in the end the UN climate summit in Paris will be the place where all countries have to make actual commitments, German negotiators said. Read more >

Does Merkel still deserve the title?

“The climate chancellor is back” read the title of an op-ed in the Frankfurter Allgemeine Sonntagszeitung at the end of May. But environmental NGOs and commentators question whether she still deserves the title, because she hasn't openly lent her support to emissions reductions from the domestic coal sector at home.

“No country can act with credibility at international climate negotiations when it doesn’t achieve its targets at home,” Environment Minister Barbara Hendricks said recently. But currently, there are many loose ends in Germany’s energy transformation, most prominently among them:

G7 energy ministers agreed in May in Hamburg that while all members were working towards the same target (CO2 reduction and a successful international climate treaty in Paris), they were pursuing different paths to future-proof their energy systems, ranging from investment in nuclear power, clean-coal technologies and renewable sources. Germany and the G7 had to prove to the world that “climate protection and economic growth can go hand in hand,” Energy Minister Sigmar Gabriel said in Hamburg.
German industry representative Ulrich Grillo said at the business association’s G7 event (B7) in May: “If the Energiewende becomes a success, it will become an export hit. If we end up in the Bermuda triangle, where German industry disappears, it won’t.”

G7 energy ministers: Invest in efficiency while energy is cheap

12 May | G7 energy ministers agree on increasing efficiency as a no-regret measure to achieve energy security and greenhouse gas reductions. Joint action planned on cybersecurity for the electricity sector and a transparent gas market. Read more >

02 June 2015 | Europe must deliver on its own targets for a successful climate summit in Paris at the end of this year, the head of the German Chancellery, Peter Altmaier, told a business conference on Tuesday. At the same time, he stressed that the transition to a low carbon economy had to be an economic success, too. Read more >

Destatis, G7 in Figures – The booklet provides facts on energy intensity, electricity production from renewable sources, import and export of energy and CO2 emissions in the G7 countries. Download here.

CLEW - Reporter's Guide to the Energiewende, attachment in sidebar.

For a selection of experts that may comment on the G7 negotiations and outcome, see sidebar >