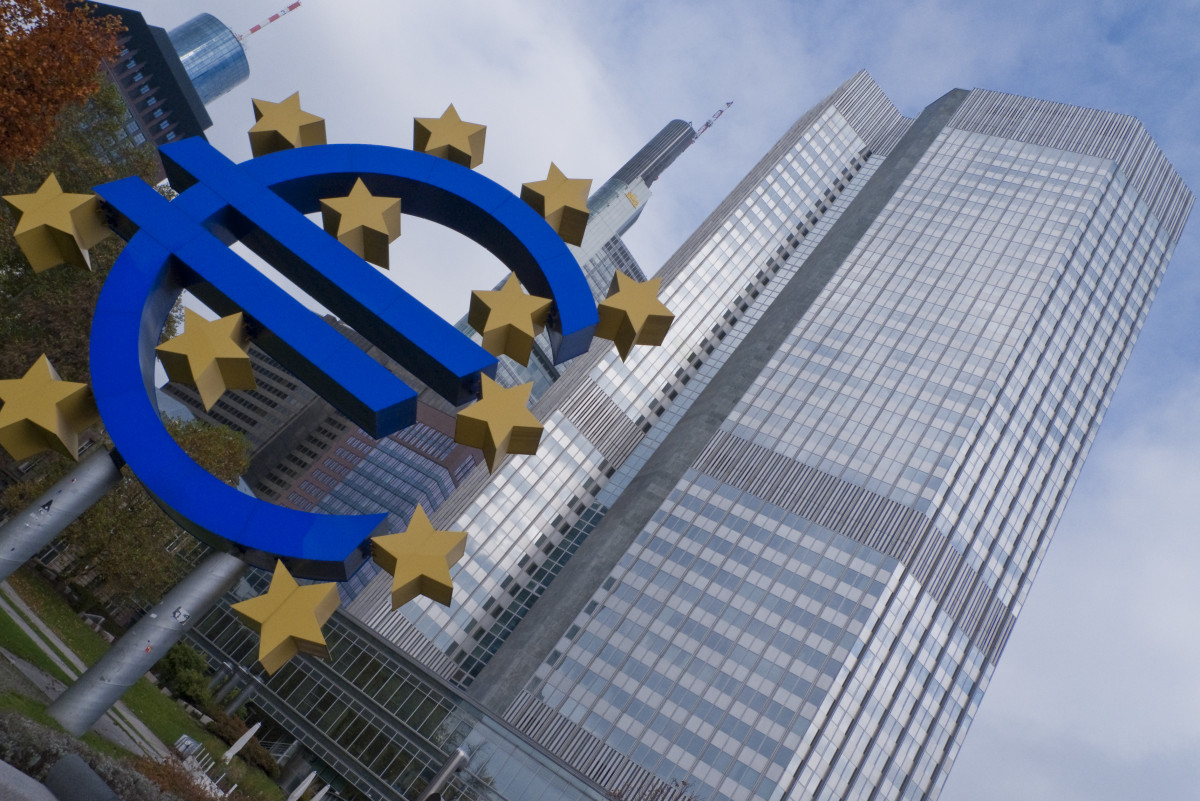 The Eurotower in Frankfurt am Main. Photo: European Central Bank

With a revamped sustainable finance strategy that introduces a new green bond standard and support for smaller companies, the EU hopes to provide the financial market guidelines needed to achieve the bloc's ambitious climate targets. With the new green bond 'gold standard' announced by the European Commission, EU members could mobilise hundreds of billions of euros in private capital to fund green projects and help bolster the EU's bid to become the lead market for sustainable investments. However, the new strategy also represents a 'missed opportunity' to resolve controversial key questions on green finance, particularly regarding the future role of nuclear and gas power in Europe's energy mix, sustainable finance market observers have said.

The EU is seeking to underpin its ambition to become the world's leading market for climate-friendly investments with an overhauled sustainable finance strategy and a new green bond standardBut while green finance observers generally lauded the European Commission's drive on this key are of global climate action, they criticise the new strategy as a missed opportunity to make progress on unresolved questions regarding the future financing of nuclear and natural gas power.

The strategy presented on 6 July outlines how funds can be raised in the context of the European Green Deal in a way that maximises the application of sustainable investment principles and minimises negative effects on the climate, social standards and other areas. "The reason why we're doing this is simple: because we need money," an EU official said at a press briefing on the strategy's release. According to the Commission, the EU would need an additional 350 billion euros per year to finance activities pertaining to the Green Deal and to prepare the continent for its goal of achieving full climate neutrality by the middle of the century, with a large share of the funds having to come from private investors.

EU Commissioner Mairead McGuiness stressed that the financial sector would have to play a key role in ensuring that the EU can live up to its ambitions stated in the Green Deal. "We need sustained efforts to ensure more money flows towards a sustainable economy" and "create a more inclusive society," she said. Ultimately, this could only work in international cooperation, for which tools like the EU's green bonds would offer a "gold standard" that sets the bar for a global approach. The Commission also specified its future disclosure requirements on the degree of sustainability of the activities of financial and non-financial companies in alignment with the EU sustainable finance taxonomy.

While the commissioner said the strategy would set out "an ambitious roadmap," observers of the green finance market were less convinced of its efficacy. Ingmar Jürgens, member of the Sustainable Finance Research Platform, a cooperation between five research institutions co-funded by the German government, criticised the Commission's proposal as "vague and hesitant." While it had made good progress in initiating and promoting sustainable finance activities overall in the past years, the latest announcement ultimately would have been a missed opportunity to resolve key conflicts and spell out clear principles. "One could argue that the Commission has lost its courage to initiate the necessary steps for making the financial sector contribute to the Green Deal," Jürgens told Clean Energy Wire. 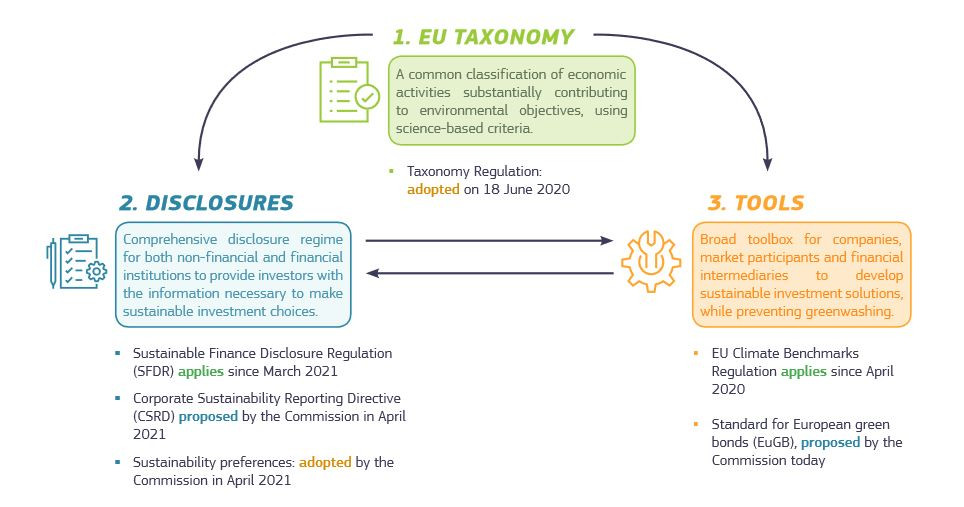 The strategy is part of a broader effort by the EU and its members in the past few years to align the economy with emissions reduction targets. Most prominently, the Green Deal offers a range of coordinated activities to improve the environmental footprint of the continent's energy, housing, industry, mobility and food sectors through targeted investments that are supposed to also function as a catalyst for economic growth. At the same time, about one third of the EU's coronavirus recovery fund, worth some 800 billion euros, is tied to environmental objectives to avoid environmental damage during the catch-up expected to follow the pandemic-induced slump.

Since the release of the strategy's first segment in mid-2020, several developments have imposed the need for a revamp. These include the coronavirus pandemic's economic impact and the advent of a new US administration that appears determined to assume a much more active role in greening the global financial system than its predecessor. The Commission argued the revamp would allow for a better integration of small and medium-sized companies (SMEs), which particularly in Germany have voiced concerns that new and tighter rules on funding could overburden their limited capacities.

The strategy's publication was preceded by an urgent warning issued by the European Central Bank and the European Systemic Risk Board (ESRB) about the impact of climate change on the European financial system's stability. The institutions said that global economic growth could shrink by one fifth until the end of the century should the mitigation of global warming prove to be insufficient or ineffective.

Key tenets of the revised strategy include provisions to improve access to transition funding, particularly for SMEs and individual consumers. It also substantiates efforts to increase the stability of the EU's financial system with regard to the physical consequences of global warming, such as droughts or floods, and other sustainability risks, while enhancing the financial sector’s contribution towards curbing climate change. The new strategy also doubles down on the ambition to retain a leading role in greening finance globally and to ensure the creation of international networks and bodies capable of comprehensively implementing sustainability principles in the sector.

The new EU green bond standard would help satisfy growing customer demand for the financial asset that in turn is much needed to initiate investments in the modernisation of energy infrastructure, the housing stock and transport systems, while at the same time ensuring that greenwashing of investments is avoided. "Issuers of green bonds will have a robust tool at their disposal to show they are funding green projects aligned with the EU taxonomy," the Commission said. The bonds would also be open to investors from outside the EU, it added.

Role of nuclear and gas in climate plans remains unclear

However, the revamp did not address unresolved key questions concerning Europe's green finance strategy, namely whether it should also include the funding of nuclear power and natural gas projects. In fact, the latest proposal would mean a "watering down" of previous agreements as it backtracks on the principle of reducing the role of nuclear power and natural gas in Europe's energy transition, researcher Ingmar Jürgens said.

Opinions on the technologies' permanent or temporary suitability for decarbonisation efforts differ substantially between the EU’s two largest member states, France and Germany. Germany and other states more sceptical of nuclear power's role in Europe's bid to become climate neutral had warned against including the technology until shortly before the strategy's release, citing concerns over reactor safety and the unresolved question of nuclear waste storage. At the same time, Germany and other countries had insisted that natural gas remains a viable option for Europe's energy transition.

Jürgens said the technology in fact would be needed to ensure adequate energy supply in the short run. But Germany's insistence on including natural gas projects in its green finance plans would be "irritating," given the country's stated ambition to become a leader in green finance. "Here is a lost chance to show that you're being serious," he argued. Similarly, a report on the use of nuclear energy by the Joint Research Centre (JRC) consulted by the Commission to decide on nuclear power's further use would have ignored scientific principles and instead contain "almost humorous" passages that equate the storage of nuclear waste to that of CO2, Jürgens said.

The researcher also criticised little provisions were made to ensure that the state does its fair share by making its own investment decisions more transparent and sustainable, even though the global bond market is dominated by public issuers. "It's unacceptable that only companies are supposed to comply while the EU member states get a free pass."

Magdalena Senn of NGO Finanzwende (Finance Transition) criticised the strategy as a "weak punch" that could lock in damaging investments for decades. The Commission would "fail to live up to its ambition," Senn said, arguing that lobby groups had successfully intervened to ensure controversial investment activities can get a green label.

German energy industry group BDEW said the Commission was right to classify some technologies as transitional tools on the path to climate neutrality. "This includes gas power plants and infrastructure to allow for the parallel phase-out of nuclear and coal power" in Germany, BDEW head Kerstin Andreae argued. "The energy transition can only be successful if we manage to guarantee supply security during the entire transformation process," she said.

France, Germany at odds over role of nuclear in EU sustainable taxonomy