Large German environmental NGOs plan to boycott an upcoming hearing on the Climate Action Plan 2050, organised by the federal environment ministry, writes Der Spiegel. Greenpeace, WWF, Friends of the Earth Germany (BUND) and Nature and Biodiversity Conservation Union (NABU) are protesting against the omission of a date for a coal exit and concrete emissions targets for each sector. Both were proposed in the extensive stakeholder consultation process. “Merkel must acknowledge and implement these [proposals], instead of watering down the climate plan,” said Tobias Münchmeyer, energy expert at Greenpeace.

“The consultation process for the Climate Action Plan 2050”

The federal government ignored many of the results of the environment ministry’s stakeholder consultation process for the Climate Action Plan 2050 because of strong pressure from economic interests, according to a report commissioned by Greenpeace. The move threatens to “strengthen the already existing estrangement between the citizens and the ‘political class’”. This would mean using the process as a “sedative pill, a symbolic mode of acquiring acceptance”, writes the author Dieter Rucht, from the Berlin Social Science Center. The process may have been transparent, well-designed, professionally moderated and scientifically underpinned, but it was also too rushed and complex. Key stakeholder groups, as well as the younger generation, were excluded or under-represented.

The group of Christian Democrats and Christian Socials in the federal parliament (Bundestag) has criticised environment minister Barbara Hendricks’ Climate Action Plan 2050, writes Andreas Mihm in Frankfurter Allgemeine Zeitung. Hendricks had bet “one-sided on government guidelines instead of market, competition [and] innovation”, and the current draft was not in line with EU standards and instruments, write four vice group chairmen in a letter to Peter Altmaier, Chief of the German Chancellery.

The massive increase in grid fees announced by TenneT and other operators signals a new chapter in Germany’s Energiewende, writes Daniel Wetzel in Die Welt. “A new phase begins whereby capacity growth no longer takes centre stage, but the system integration of weather-dependent wind and solar power.” Technical efforts for transmission and distribution grids, as well as power storage, will become the most important factor driving costs, according to Wetzel.

For background, read the CLEW factsheet What German households pay for power.

Next year’s power price increase is not the fault of wind and solar power generation operators, writes Olaf Ridder in a commentary for Frankfurter Rundschau. The rise is the price consumers have to pay for the delay in grid extensions, one of many political failures characterising the Energiewende, according to Ridder. He says an increase of 30 euros per year might be tolerable for most households, but might prove too much for many manufacturing companies.

For background, read the CLEW factsheet Industrial power prices and the Energiewende.

The digitalisation of Germany’s power market attracts entirely new players, reports Daniel Wetzel in daily Die Welt. Internet providers, new utility subsidiaries, and independent start-ups all try out new business models for a digitalised and decentralised energy world, where supply and demand can be steered more efficiently. Households operating rooftop solar arrays in combination with a battery are even offered flat rates for the entire year, according to Wetzel.

“Energy for the stock market”

innogy’s stock market debut on 7 October could turn into Germany’s largest initial public offering (IPO) since 2000, writes Jürgen Flauger in Handelsblatt. innogy - RWE’s renewable spin-off - wants to attract investors interested in a stable and reliable development rather than leaps and bounds, because its profits are calculable and also limited by government regulations. The current price range means innogy would be worth more than twice as much as parent company RWE, Germany’s largest coal power producer. RWE’s current market capitalisation is nine billion euros, while E.ON is worth only 12.8 billion and its spin-off Uniper a mere 3.8 billion. “innogy is likely to become Germany’s most valuable utility right from the start,” writes Flauger.

VW has released new design sketches of its first electric-only model ahead of its full reveal at the Paris motor show next week, reports Autocar. The images show a five-door hatchback with sliding rear passenger doors.
VW’s electric vehicle plans are highly anticipated because Europe’s largest carmaker wants to become an industry leader in renewable mobility and plans to sell between two and three million e-cars per year in 2025. 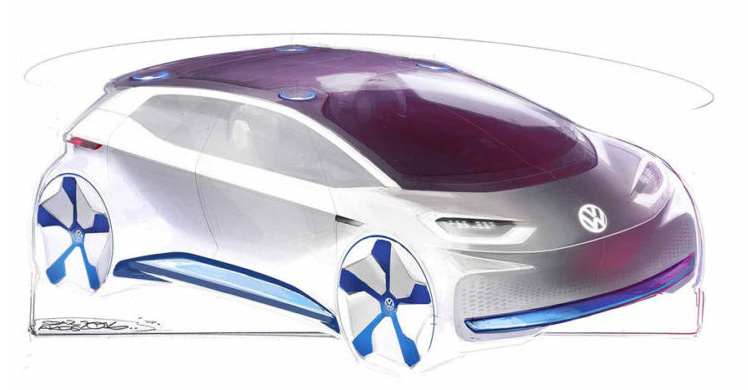 For a more general introduction to the subject of renewable transport, read the CLEW dossier The energy transition and Germany’s transport sector.

German climate targets for the building sector are in danger because many house owners shy away from modernising their buildings to meet higher energy standards due to the costs involved, writes Ralph Diermann in Frankfurter Allgemeine Sonntagszeitung. The real estate industry opposes stricter regulations as current standards were already “one of the biggest cost drivers”, according to Axel Gedaschko, president of housing industry associations GdW. The German federal government plans to funnel existing legislation into one ‘Building Energy Law”, writes Diermann.

For background, read the CLEW dossier The Energiewende and Efficiency.