The German government has launched a new offensive to increase energy efficiency. Energy minister Sigmar Gabriel said at a press conference on Thursday that efficiency was not only good for the climate, but also essential from an economic point of view to increase Germany’s competitiveness. The efficiency programme was not a call for abstinence, but he instead wanted to convey the message that “we can do more with less”, Gabriel said. "This also includes more growth and more prosperity." His ministry will allocate a total of 17 billion euros for efficiency measures from 2016 to 2020, which includes previously announced programmes. “With that amount, we can surely get a lot moving,” Gabriel said.

For background, read CLEW's Dossier The Energiewende and Efficiency: Taming the appetite for energy

German energy minister Sigmar Gabriel rejected a French proposal for a carbon floor price. At a press conference on Thursday, Gabriel said it was necessary to reform the European Emission Trading System (ETS), and that it made no sense to talk about a carbon tax at the same time. “I believe the ETS is the better system,” Gabriel said.
France’s environment minister Ségolène Royal had said she hoped for Germany’s support for the idea of a carbon emissions floor price, according to a Bloomberg report. “The idea is that we decide on it together with Germany, and that we create a momentum for other European countries,” Royal said in an interview. Her goal is a Europe-wide “corridor” including a minimum price, which would rise over time. Germany’s Economy and Energy Minister Sigmar Gabriel is “not necessarily” pushing for a floor price, Royal said.

Germany’s Energiewende is a paradigm for the rapid and disruptive changes that many electricity markets are now facing or will soon face, according to an analysis by business consultancy Oliver Wyman. “Due to its early adoption of renewable energy, Germany is now a good example of the kind of turbulence that can be expected as electricity markets transition.” More than three-quarters of households, utilities, and industrial companies the consultancy surveyed in collaboration with Munich University have a positive view of the project. 58 percent of those polled also said the Energiewende might influence their decision in next year's general election, while 42 percent said this was not important.

Also, read CLEW’s Factsheet Polls reveal citizens’ support for Energiewende, as well as the Factsheet What business thinks of the energy transition. 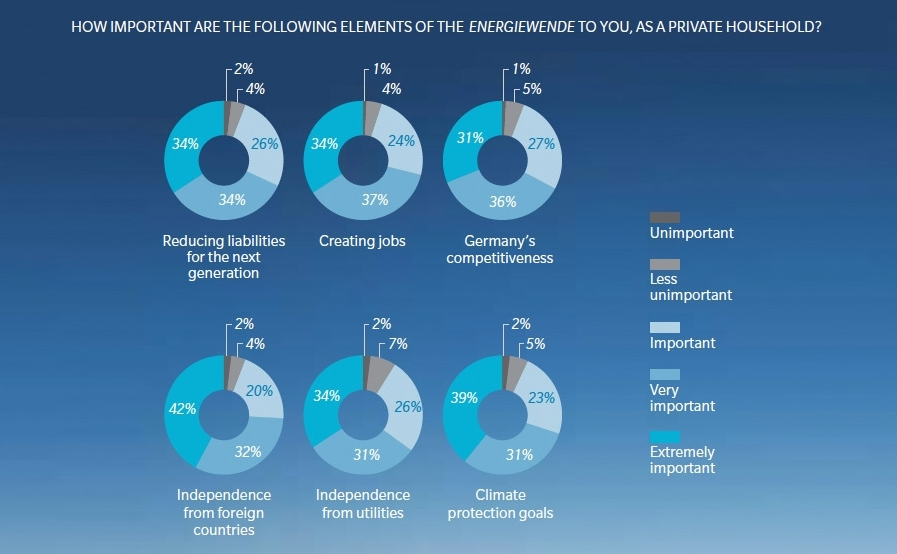 Highly profitable trading compensated slumping power prices at utility RWE at the start of the year. Adjusted net income for Germany’s largest power producer decreased 2.3 percent in the first quarter to 857 million euros, reports Tino Andresen for Bloomberg. That was better than analysts had expected, pushing up RWE shares. The utility reiterated its forecast of 500 million euros to 700 million euros for the year. But analysts warned the company faced an uncertain future due to high uncertainties, reports Andresen.

E.ON’s repurchase of a 15.5 percent share for the Baltic gas pipeline Nord Stream from its conventional power spin-off company Uniper showed how financial realities made it hard for the utility to keep with its new green image, writes Süddeutsche Zeitung. According to Michael Sen, E.ON’s chief financial officer, Uniper urgently needed the money for its financial room for manoeuvre. On the electricity market, conventional power plants have a hard time competing with renewables. “That makes the start for Uniper so difficult that E.ON interprets its self-imposed green image more generously,” writes Süddeutsche Zeitung.

Read an article (behind paywall) by Handelsblatt Global Edition in English here.

The big four utilities in Germany, EnBW, E.ON, RWE and Vattenfall, ignored the transition towards renewables for too long. This puts the companies in very difficult financial situations with thousands of jobs at risk, writes Alexandra Endres in Die Zeit. It remains to be seen how the companies will deal with their transition towards renewables and the cost of their coal and nuclear liabilities. Heinz-Josef Bontrup, of the Westphalia Energy Institute (WEI), said: “That is an announced structural change. The companies believed far too long that politics would not crack down on them. And they were mistaken.”

For more information read the CLEW dossier The challenges of Germany’s nuclear phase-out.

Economics minister Sigmar Gabriel acts too late and does not go far enough with his reform push to open up the Energiewende to market forces, writes Andreas Mihm in a commentary in Frankfurter Allgemeine Zeitung. Mihm criticises the “over-supported system” of the past years and says the money would have been better invested in the flexible grid infrastructure needed to make use of more and more wind and solar power. “As long as there is no better coordination of production of renewable power and the grid, we will continue to face the gigantic waste of resources that the EEG [Renewable Energy Act]-system produces day after day. It is the economics minister’s duty to stop this madness.”

“Amendment with a dent“

The tendering process for renewables needs to be as investor-friendly as possible, according to Veronika Grimm, of the University of Erlangen-Nuremberg, and Claudia Kemfert, from the German Institute for Economic Research (DIW), in a guest commentary in Die Zeit. “It needs clear and simple procedures and the ordering party must not demand too many advances and securities from the bidder.” On the other hand, this could lead to many projects never being realised as companies decide not to follow through. The authors offer no solution to this conflict, but end the commentary with the words: “Many challenges for our politicians.”

Read CLEW's Article Auctions to set the price for wind and solar - the debate.

Renewables associations have warned that proposals currently being considered by the government to switch from the feed-in tariff incentive scheme to a system of contract auctions would slow the country’s energy transition, writes James Murray on BusinessGreen. After consultancy EY’s report of Germany’s declining appeal for renewables investments, the groups’ statement shows the widespread criticism for current reform plans for the Renewable Energy Act (EEG). Murray, however, makes clear: “Even in Europe’s most established renewable energy market, the sooner the sector can end its reliance on subsidy-based policies, the better.”

The renewable energy industry will stand little chance with its protest against current plans to reform the Renewable Energy Act (EEG), writes Klaus Stratmann in Handelsblatt. “Even friends and supporters of renewable energies like economic state secretary Rainer Baake say today that there is ‘fat in the system’ which needs to be removed.”