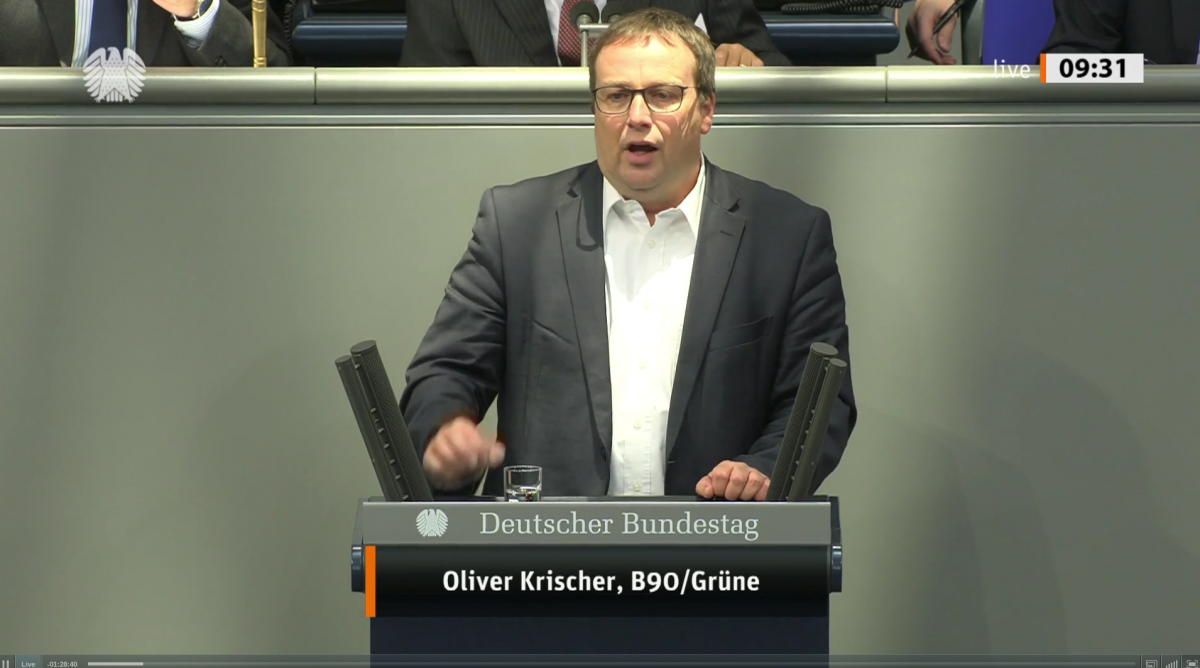 Opposition parties have strongly criticised the German government coalition’s climate policy package in a first parliamentary debate on key legislative elements, such as the planned major climate action law. The first reading in the Bundestag marks the beginning of parliamentary proceedings on the decisions chancellor Angela Merkel’s grand coalition of the conservative CDU/CSU alliance and the Social Democratic Party (SPD) made on 20 September, including the introduction of a major climate law and a pricing system for CO2 emissions in transport and buildings. The government parties account for the majority in parliament, but details of the government’s drafts could still be amended over the coming months.

Germany’s opposition parties used the first debate on key legislation for the government's climate package to criticise the Climate Action Law and the Climate Action Programme 2030, which aim to bring Germany back on track to reach its 2030 targets.

Oliver Krischer, deputy head of the Greens’ parliamentary group, said the climate package could reach a third of targeted national emissions reductions at best, and in no way the goals of the Paris Agreement. It would not deliver on key issues such as the reduction of climate-harmful subsidies, and the necessary expansion of renewable energies. Krischer said he hoped at least some details of the package could be changed in the parliamentary process.

Frank Sitta, deputy parliamentary group head of the pro-business Free Democrats, criticised the planned speedy process the government aims to have in parliament now. Instead of taking time to seek a climate consensus with other parties – as was originally proposed by CDU party head Annegret Kramp-Karrenbauer – the government “is chasing the result of its inner-coalition quarrels head over heels through the parliament.” Sitta also criticised the planned CO2 emissions trading system for transport and buildings. Due to the fixed prices in the early years it would be a “carbon tax in disguise without any steering effect”.

The policy package contains crucial measures such as introducing a price on carbon emissions in the transport and buildings sector, but from the onset has also been criticised for lacking ambition and being insufficient to meet climate targets. To implement the proposals, multiple laws have to be introduced or amended in parliament over the coming months.

Thus, today’s debate kicks off what looks to be a months-long legislative process. The parliament (Bundestag) has to adopt the necessary laws to implement the climate package, and there will be different timelines for the individual policy elements. In some cases, the council of state governments (Bundesrat) must also agree, which could demand additional time. The coalition plans to have final decisions on many of the pieces before the year is out.

The Left Party’s Gesine Lötzsch said the climate package lacked social fairness. She highlighted that the German Institute for Economic Research (DIW) and the German Court of Auditors had criticised that the plans put lower-income households at a disadvantage. “So far, you have dealt with every crisis at the expense of the lower and middle class,” Lötzsch told government representatives present in parliament, using the rescue packages during the financial crisis as an example.

The far-right populist Alternative for Germany (AfD) criticised the plans for their costs and reitarated its denial of the human influence on the climate.

Climate package will be “love at second sight” - finance minister

The government coalition defended the package. Environment minister Svenja Schulze (SPD) called the decisions the “biggest climate action package Germany has ever seen”. Alluding to the legislative process kicked off today, she said: “We have a work-intensive autumn ahead of us.”

Finance minister Olaf Scholz (SPD) said the government would present more and more legislative proposals to implement the package. Despite recent criticism, Scholz said he expects parliamentarians to come around in the upcoming debates. The government plans would be “love at second sight”.

Andreas Jung (CDU), deputy head of the CDU/CSU parliamentary group, said that with the climate action law, Germany’s targets – which have so far been a government policy programme – would now be made legally binding, namely the 2030 target to reduce greenhouse gas emissions by 55 percent, and the long-term target to become climate-neutral by 2050. “Thus, we want to make our climate policy part of the success of the climate action of the European Union,” said Jung.

Another CDU/CSU deputy parliamentary group head, Georg Nüßlein (CSU), said that climate change could not be tackled through changes in behaviour of citizens. Rather, German ingenuity would have to do the trick. “We will have to ensure that mobility in the world is guaranteed through technology,” said Nüßlein.