Household electricity prices reached an all-time high at an average of 29.16 cents per kilowatt hour (ct/kWh) in February 2017, compared to 28.8 ct/kWh in 2016, writes utility association BDEW in its current power price analysis. This was down to record costs for taxes and levies, which will amount to more than 35 billion euros for households in 2017, says BDEW. “In light of these figures we have to discuss how we can reasonably design the financing of the energy transition in the future,” BDEW head Stefan Kapferer said in a press release. 55 percent of the household power price is taxes and levies, while only 19.3 percent is procurement and distribution costs, says BDEW. These continued their fall for the fifth year in a row. Grid fees are the second largest factor and make up 25.7 percent of the average household power price. 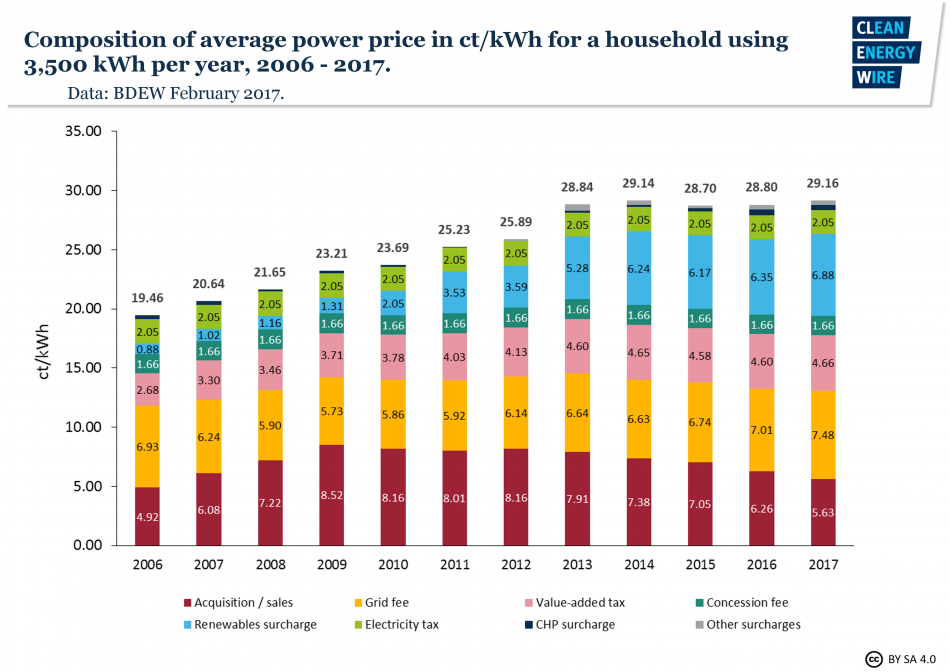 For background on power prices read the CLEW factsheet What German households pay for power.

The German Renewable Energy Federation (BEE) has criticised the European Parliament’s propositions for a reform of the EU’s Emissions Trading System (ETS) for being “an empty shell” that cements the system’s status as “an ineffective instrument for climate protection”. The ETS was “not going to achieve the CO2-reductions provided by Paris”, the BEE said in a press release. The federation said the number of issued certificates had to be reduced by 4.7 percent per year to limit global warming as intended, while the 2.2 percent the parliament now agreed on were failing to achieve this goal. Since the ETS turned out to be an ineffective instrument on the European level, the BEE called for a national approach in which CO2-emissions in the power and heating sector receive a price tag.
By contrast, the liberal Cologne Institute for Economic Research (IW Köln) said the ETS was “functioning well”. In a press release, the institute rejected criticism that the current price of five euros per tonne CO2 was too low. It defended the parliament’s decision to issue more certificates free of charge as this ensured the energy intensive industries’ competitiveness.

Find a Reuter’s article on the ETS reform in English here.

The price for emitting one tonne of CO2 under the EU’s Emissions Trading System (ETS) has been frozen at five euros for years because “the EU reaches its climate targets either way”, Hendrik Kafsack writes in a commentary for Frankfurter Allgemeine Zeitung. If Europe’s industry now was “artificially forced to make greater climate protection investments”, this would merely lead to exceeding climate targets, he argues. “This would delight the rest of the world, which now had to do less. The climate won’t benefit from that,” Kafsack writes.

For background, see the CLEW dossier The Energiewende and climate change.

“Germany prepares for climate clash with Tillerson at G-20 talks”

The German government wants to make climate change a central topic at the upcoming G20 foreign affairs minister meeting in Bonn and is ready to challenge the new US administration on the issue, report Brian Parkin and Patrick Donahue for Bloomberg, citing an unnamed official in Berlin. “Climate change cannot be tackled by barbed wire,” federal foreign minister Sigmar Gabriel said in a briefing document released ahead of the meeting. This was “a barely-disguised swipe at Trump’s ambition to build a wall between the US and Mexico”, writes Bloomberg.

Opel CEO Karl-Thomas Neumann intends to turn the German car manufacturer into a pure e-car brand by 2030, Michael Freitag reports on Manager Magazin’s website. Neumann has been working on the transformation since before deliberations by Opel’s US-owner GM to sell the brand to French competitor PSA surfaced earlier this week, Freitag writes. The parent company regarded Neumann’s plan as a possible way of securing the traditional car brand’s survival, he explains. But Neumann’s hopes could be dashed as Opel may lose access to GM’s new e-car development platform, Freitag writes. Neumann even considered splitting the brand up into a conventional and an e-car manufacturer, similar to the split of German utilities E.ON and RWE into conventional and renewable energy companies, according to Manager Magazin.

For background, read the CLEW dossier The Energiewende and German carmakers.

Row over nuclear waste export to US threatens repository law

Considerations within Germany’s governing conservative party CDU to transfer 152 containers with radioactive fuel elements from a research reactor to the US could deal a blow to the country’s search for a final repository for its nuclear waste, Michael Bauchmüller writes in Süddeutsche Zeitung. Germany’s government-appointed nuclear phase-out expert commission last year ruled out exporting nuclear waste as a way of dealing with the hazardous legacy, but the CDU-led Federal Ministry of Education and Research opposed a blanket nuclear waste embargo within the government, Bauchmüller explains. Politicians of the Green and Left parties criticised the conservatives for “blocking the law” to find a final repository and urged that “the commission’s recommendations have to be implemented one-to-one”, Bauchmüller writes.

For more information, see the CLEW dossier The challenges of Germany’s nuclear phase-out.

Onshore wind power in Germany will be expanded beyond the industry’s expectations and federal government plans in the coming years, writes Daniel Wetzel in Die Welt, based on data provided by the Federal Network Agency (BNetzA). Investors who had registered plans for new turbines until the end of 2016 would still receive set feed-in tariffs if their turbines are connected to the grid by the end of 2018. With the reform of the Renewable Energy Act (EEG), feed-in tariffs are replaced with a competitive auction system. This had led to a high number of new registrations before the deadline, writes Wetzel. If all these projects were to be realised, about 2,950 new turbines with a total generation capacity of 8,840 megawatts would be added to the current 27,270 turbines (about 46,000 megawatt capacity) by the end of 2018, writes Wetzel.
In a recent press conference, German onshore wind industry representatives said that the new EEG could lead to a drop in the German market in 2019.

For background read the CLEW dossier The reform of the Renewable Energy Act.

“Energiewende – From Germany’s past to Europe’s future?”

Germany must “expand the lessons it has learned to the European level” and integrate the German and European energy systems in order to make the energy transition a durable success, writes Thomas Cunningham in an in-depth paper for the Global Energy Center of think tank Atlantic Council. This was necessary, for example, to cope with the challenges resulting from phasing-out nuclear and fossil power. “The fact that German policy has made them obsolete without finding a substitute to provide [critical baseload and peak load services] implies that more seamless grid integration beyond German borders will become even more important in the future,” writes Cunningham.

Find the paper in English here.

Google plans to send a group of managers to the northern German state of Schleswig-Holstein to assess the conditions for building a computing centre powered by wind energy, Kieler Nachrichten reports. “It is well known that Google is looking for new locations for computing centres in Europe,” Marcus Hrach, of the German Wind Energy Association (BWE), told the newspaper. Schleswig-Holstein’s state government explained thE US tech giant wanted to cover its energy demand completely by renewable power sources and was the biggest buyer of the technology worldwide. The German state had “a lot of expertise in the field of renewable energy – that falls into place”, a state official told Kieler Nachrichten.

For the renewables’ share in German power consumption, see the CLEW factsheet Germany’s energy consumption and power mix in charts.