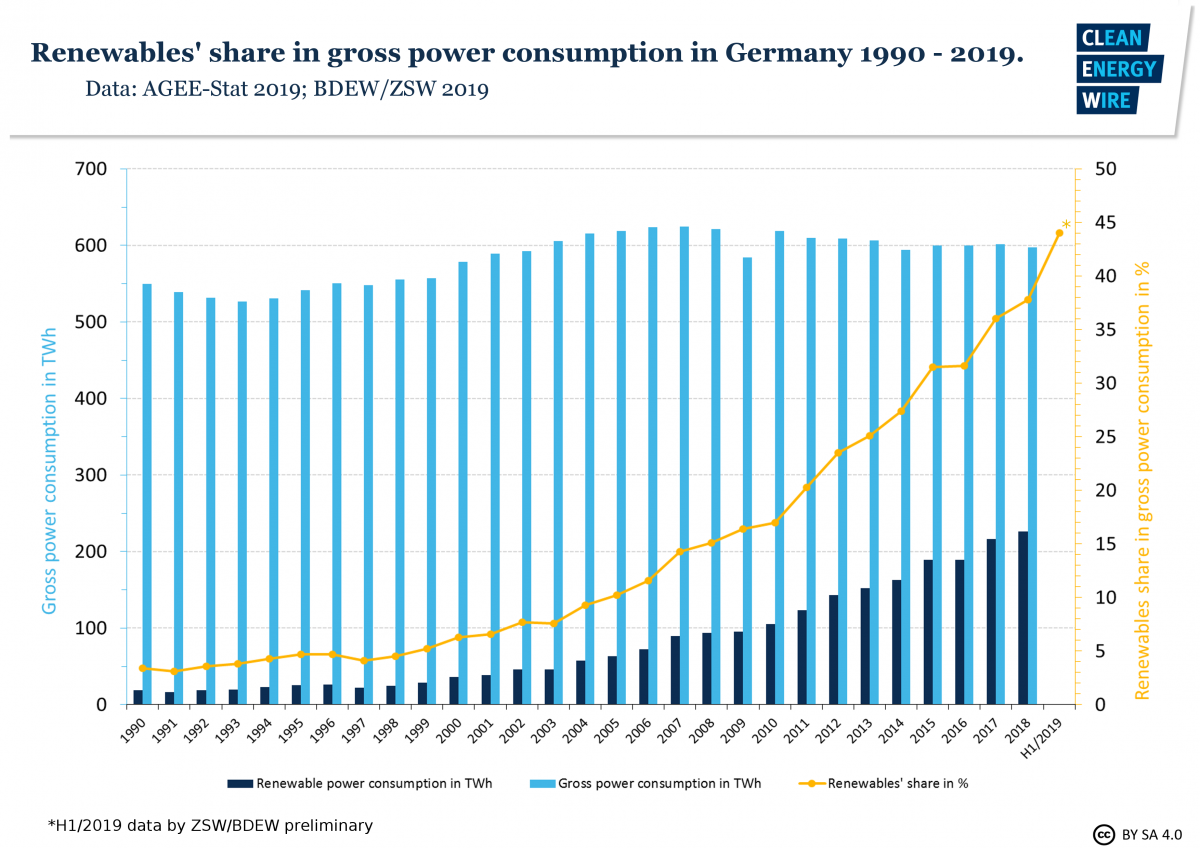 Renewable energy sources delivered a fresh record in Germany in the first half of 2019 with a share of 44 percent in electricity consumption as stormy weather boosted wind power production on land and at sea, utility association BDEW said.

Renewables covered a record 44 percent of the electricity consumed in Germany in the first six months of 2019, as wind power production was consistently above average, according to preliminary data by energy industry association BDEW and the Centre for Solar Energy and Hydrogen Research Baden-Wuerttemberg (ZSW). The share was 39 percent in the same period last year.

Wind power generated by onshore installations increased 18 percent, while offshore wind farms produced 30 percent more electricity. The output of solar PVs rose by some 4 percent, but generation from other renewables, such as hydro and biomass, fell by about 1 percent.

The German government aims to raise the share of renewables to 65 percent by 2030 as part of its Energiewende drive to replace fossil and nuclear power generation. However, a recent drop in new wind power installations, caused by uncertainty following a shift to an auction-based system and growing popular resistance against wind farms, has triggered concerns that renewables growth could be too slow.

Energy industry groups, such as the BDEW, have called for action to revive new installations, especially in light of the decision to phase out coal-fired power generation completely by 2038 and chancellor Angela Merkel’s pledge to make the country climate-neutral by 2050. Renewable industry groups also want a cap on solar PV installations lifted and industry is lobbying for more ambitious expansion of offshore wind.

Rising electricity needs from the looming shift to e-mobility and attempts to make heating and cooling of buildings climate-friendly add to pressure to speed up the expansion. The government plans to adopt the necessary legislation to raise the future volumes of auctioned renewables capacity by the end of 2019.

BDEW head Stefan Kapferer has warned against the challenges ahead. “The renewables record is a welcome snapshot that should not cover up the underlying problems,” he said. With the current speed of expansion, Germany was only on track to reach a 54 percent share by 2030. Kapferer renewed his call from last week to reduce land use restrictions for solar and wind power.

German Solar Association (BSW) managing director Carsten Körnig said the record must not distract from the fact that it is high time for the government to act. “The climate cabinet knows we are heading for a severe slump in solar PV expansion during the first months of next year, unless the pending elimination of the support scheme for rooftop installations is cancelled.” Germany can only reach its climate targets by “unleashing” solar energy, Körnig said.