Significant drop in energy use pushes down German emissions in 2018 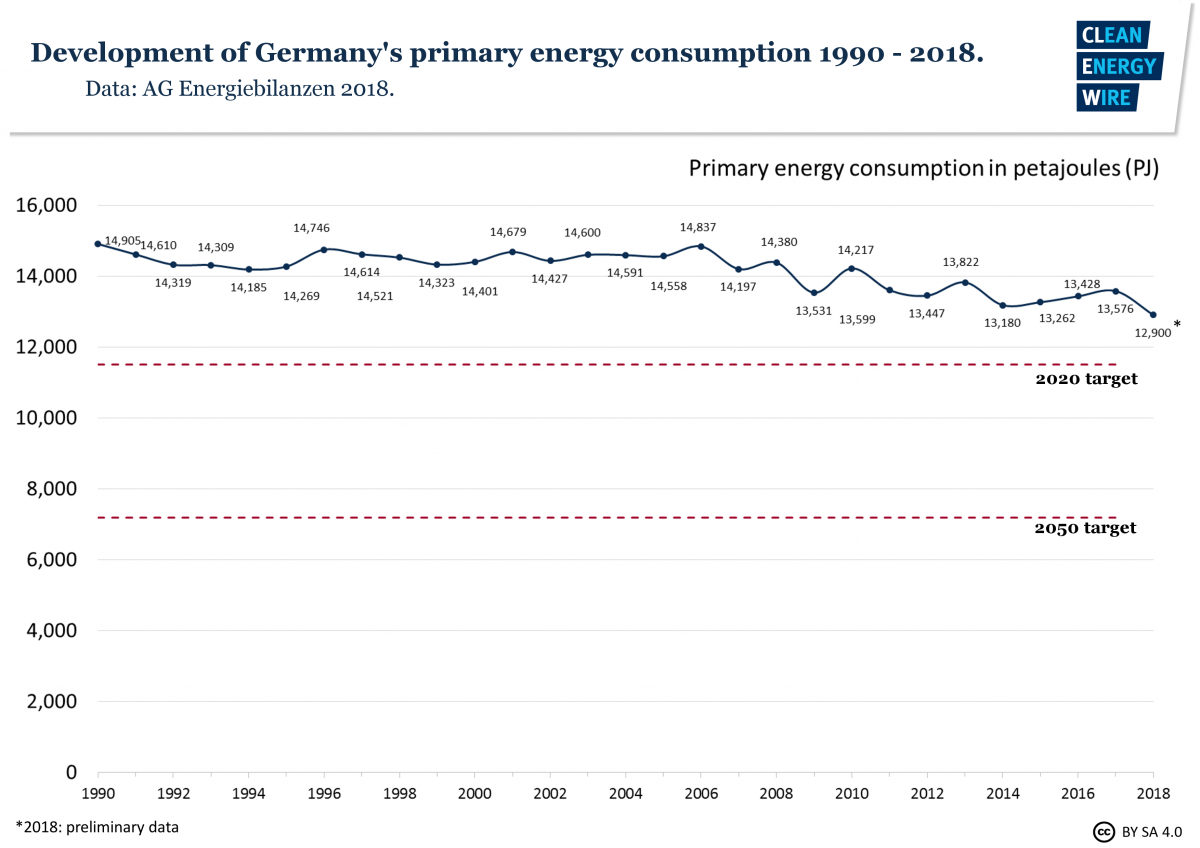 Germany’s energy-related CO₂ emissions dropped by more than six percent year-on-year as the country consumed “significantly” less energy in 2018, but with a greater share of renewables than last year, said energy market research group AG Energiebilanzen (AGEB). Increased fuel prices, mild weather and better energy efficiency were the main reasons that pushed German energy consumption to the lowest level since the early 1970s. While consumption of energy produced from renewable sources increased slightly, all fossil sources contributed less to the country’s energy mix than in 2017.

Preliminary data by AGEB shows that the share of renewables in Germany’s energy consumption increased to 14 percent in 2018. Because the consumption of all fossil sources decreased at the same time, the energy market research group expects that energy-related CO₂ emissions will have decreased by more than six percent, AGEB writes in a press release. 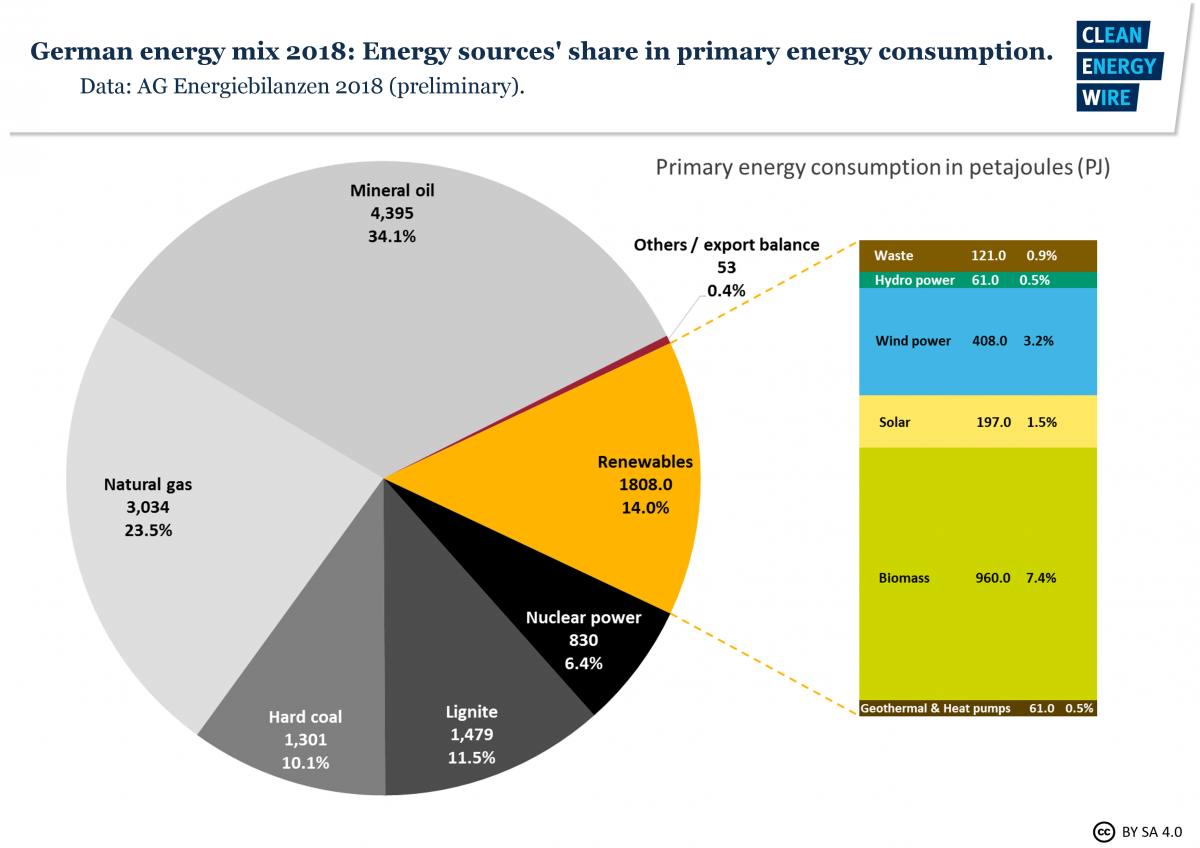 The country of the Energiewende - Germany's dual shift from nuclear and fossil fuels to renewable energy sources – has rapidly increased its share of renewable energies, but emissions have remained stubbornly high mainly due to the continued use of coal power, currently the country’s single largest source of greenhouse gas emissions.

An increase in power production from renewables and higher prices for European Union Emissions Trading System (ETS) allowances pushed hard coal use in 2018 down by 11.2 percent, compared to last year. Lignite use decreased for the 6th year in a row, by 1.9 percent in 2018, writes AGEB.

Renewable power sources contributed 35 percent (2017: 33%) to German electricity generation in 2018. The share of hard coal and lignite power production together was also at 35 percent, down from 37 percent in 2017, the German Association of Energy and Water Industries (BDEW) said in its own data publication today. Both the share of natural gas and nuclear power remained at last year’s levels of 13 and 12 percent respectively.

The BDEW calculates that the energy sector thus emitted 11 million tonnes of CO2 less than in 2017. “With this the energy sector stays on track to reducing greenhouse gas emissions by 40 percent by 2020 – unlike other sectors,” chairman of the executive board Stefan Kapferer said in a press release.

Germany’s total energy consumption of 12,900 petajoules in 2018 (-5 percent) still depended almost 60 percent on oil and gas, most of which has to be imported. 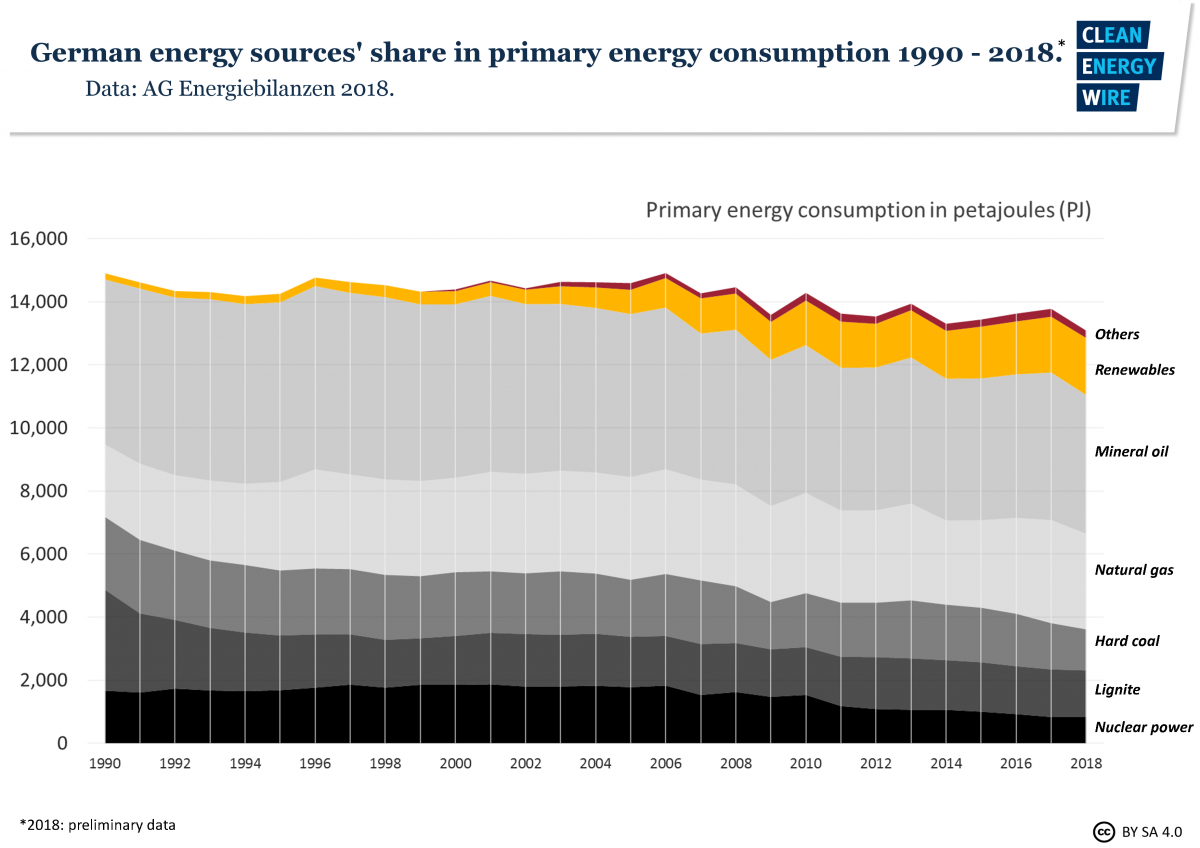