Germany’s CO2 emissions are on course for their largest drop since the 2009 recession this year after remaining virtually unchanged for four consecutive years, according to first estimates by energy market research group AG Energiebilanzen (AGEB). But experts warned the decrease did not yet indicate a trend reversal because it was mainly caused by warmer weather. [UPDATE adds BDEW renewables data, DWD data and comments by energy experts Ziesing and Koenig]

Strong renewable power production and warm temperatures lowered Germany's CO2 emissions by around seven percent in the first nine months of 2018, according to the calculations by energy market research group AG Energiebilanzen (AGEB). If a decrease of this magnitude is sustained throughout the whole year, it would be the sharpest decline since the 2009 recession.

“Because the drop in consumption concerns all fossil energies, while CO2-free energy production increased, AG Energiebilanzen expects a disproportionate decrease of CO2 emissions,” the group said in a press release. [Find detailed data in this AGEB report.]

Energy experts said the data did not indicate that Germany was solidly on track for further emissions reductions in the coming years. Hans-Joachim Ziesing, a member of the federal government's independent Energiewende monitoring expert commission, said the drop was largely caused by one-off effects. “I would warn against calling this a trend,” Ziesing said. “I would also warn against believing that we are now taking big steps towards the 2020 climate targets. The gap is far too large to get there on the basis of this year’s developments.”

Hanns Koenig from Aurora Energy Research said emissions could even rise next year if energy demand and the weather returned to average levels.

Oil and gas consumption each fell around seven percent in the period from January to September compared to the same period in 2017, while hard coal use dropped almost 13 percent and lignite decreased by almost 2 percent, according to AGEB. In contrast, nuclear power production increased by almost 5 percent and renewable production by around 3 percent. Wind power was up 13 percent and solar added 14 percent, while biomass remained unchanged and hydropower dropped 10 percent. 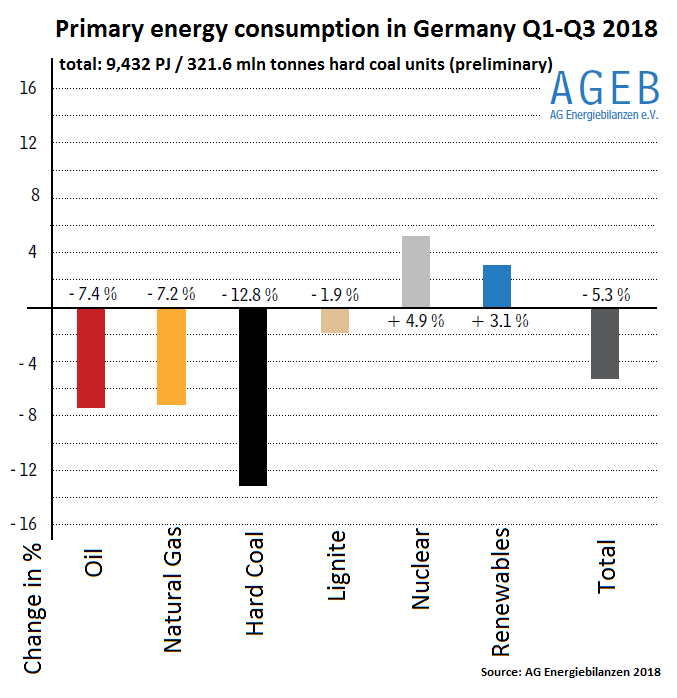 According to new figures from utility association BDEW, renewables produced 38 percent of the electricity used in Germany between January and September, an increase of three percentage points over a year earlier. In January, April and May, renewables’ share even climbed to 43 percent thanks to strong winds and sunshine.

Koenig said the wind power increase could be sustainable due to significant capacity additions. But he said solar expansion was still lagging behind plans. “It was mostly a sunny summer which was responsible for the solar power increase.”

The trend has likely continued throughout October, as Germany's National Meteorological Service (DWD) reported an “exceedingly sunny and very warm” month. The DWD also said the first ten months of the year have never been as warm as in 2018, since German-wide weather measurements started in 1881.

AGEB’s Uwe Maaßen already told the Clean Energy Wire in July that the heatwave during summer could have notable effects on Germany’s energy consumption in the second half of the year.

Germany’s CO2 emissions largely stagnated in recent years and the government officially abandoned its national aim to achieve a reduction of 40 percent compared to 1990 levels by 2020.

An emissions drop by seven percent for the entire year would lower Germany’s total emissions to 842 million tonnes, compared to 905 million tonnes in 2017. The 2020 target put a limit of 751 million tonnes on emissions in that year. However, the AGEB data only refers to “energy-related” CO2 emissions (agricultural and process-related industry emissions are not included, among others), which represent about 80 percent of total greenhouse gas emissions, according to Ziesing.

The country of the Energiewende - Germany's dual shift from nuclear and fossil fuels to renewable energy sources – has rapidly increased its share of renewable energies, but emissions have remained stubbornly high mainly due to the continued use of coal power, currently the country’s single largest source of greenhouse gas emissions.

Germany has set up a commission tasked with managing the end of coal-fired power production, and to sketch a plan for lowering the CO2 output as much as possible by 2020. The government also wants to introduce a climate protection law next year to outline binding pathways to reach Germany’s internationally binding 2030 climate targets. 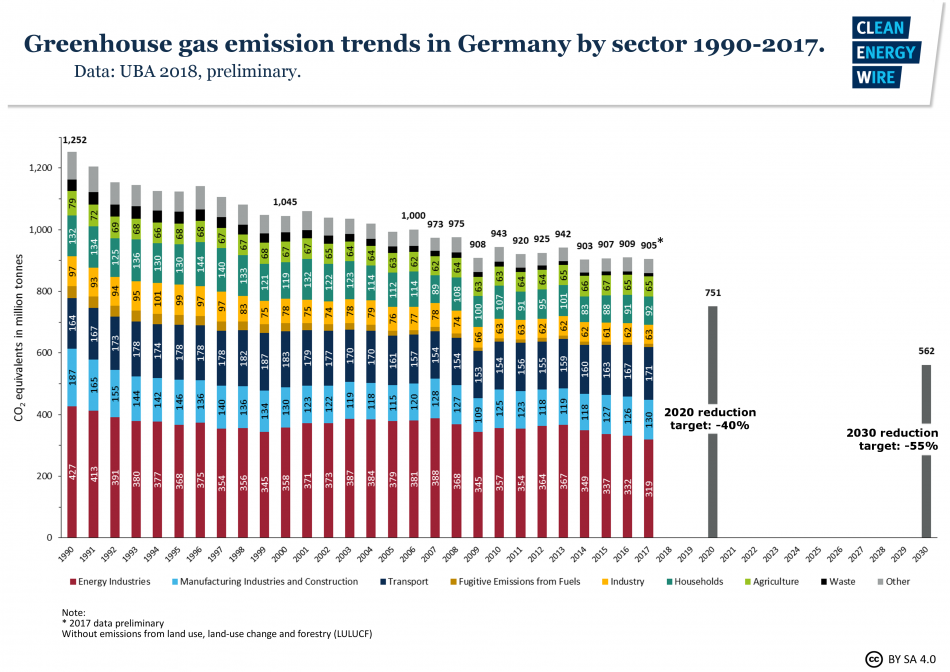